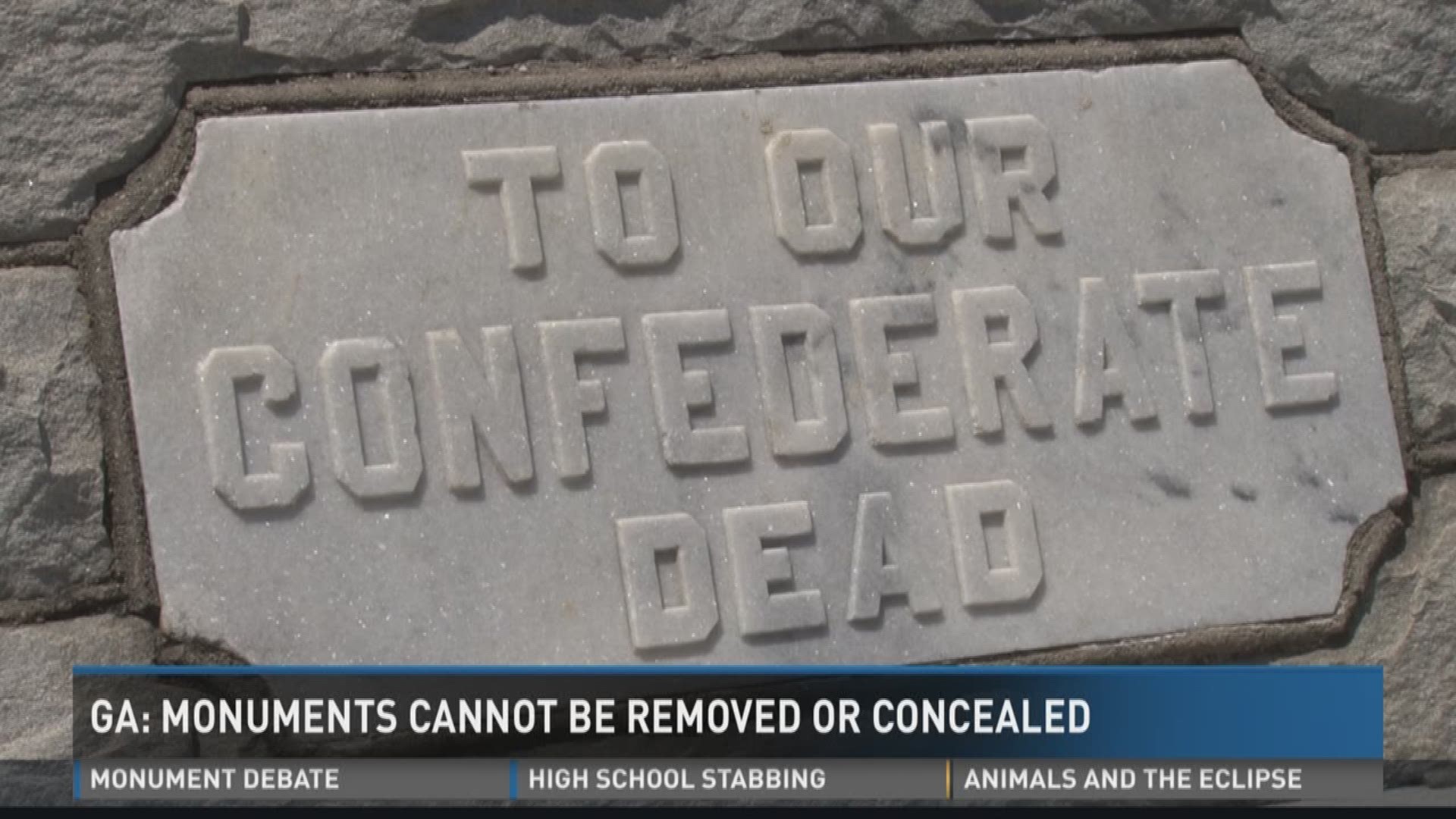 An existing Georgia state law may make it impossible for any cities and counties to completely remove or destroy existing Confederate monuments.

Warner Robins City Attorney Jim Elliott has been dealing with local and state laws for 32 years.

He says Georgia law leaves little wiggle room for local governments when it comes to removing military monuments, including the Confederacy.

LIST: Where are all of central Georgia's Confederate monuments located

“The statute seems to very specifically deal with removal of, destruction of, defacing of, covering if, I think that was very interesting,” Elliott said in his office on Wednesday.

Elliott says a version of the state statute has been on the books since the early 20th century and it was last amended in 2004.

Meaning the monuments in Macon-Bibb and Houston Counties are older than the law itself.

The one in Perry in front of the Old Courthouse says it honors Confederate men from Houston County who lived and died, it was commissioned in 1907.

One in downtown Macon was erected to the memory of the Women of the South, it was dedicated in 1911.

The second one in downtown Macon, which says it honors the men of Bibb County who died fighting for the Confederacy, was erected in the late 1800s and then moved to its current location in the 1950s.

“Those memorials, those various sculptures honoring members of the military or branches of the military are now protected under state law until the statute may be changed, if ever,” Elliott said.

The law says specifically that no publicly owned military monuments can be relocated, removed, concealed, obscured, or altered unless it is to preserve, protect, or help interpretation.

Elliott says it seems like state legislators knew it would one day be controversial.

Elliott also said it's important for protestors, or others who do not support the monuments, to know that the state preempted local government's action and has basically kept their hands tied when it comes to removing statues and monuments.

Their options are either to move them to other public property or let them stand, they cannot be removed entirely or destroyed.

The following is a portion of the state law:

(2) No publicly owned monument or memorial erected, constructed, created, or maintained on the public property of this state or its agencies, departments, authorities, or instrumentalities in honor of the military service of any past or present military personnel of this state, the United States of America or the several states thereof, or the Confederate States of America or the several states thereof shall be relocated, removed, concealed, obscured, or altered in any fashion; provided, however, that appropriate measures for the preservation, protection, and interpretation of such monuments or memorials shall not be prohibited.