Lorenzo Liberti started making flags after meeting a homeless veteran. He hopes to have a flag on display at a hospital in every state. 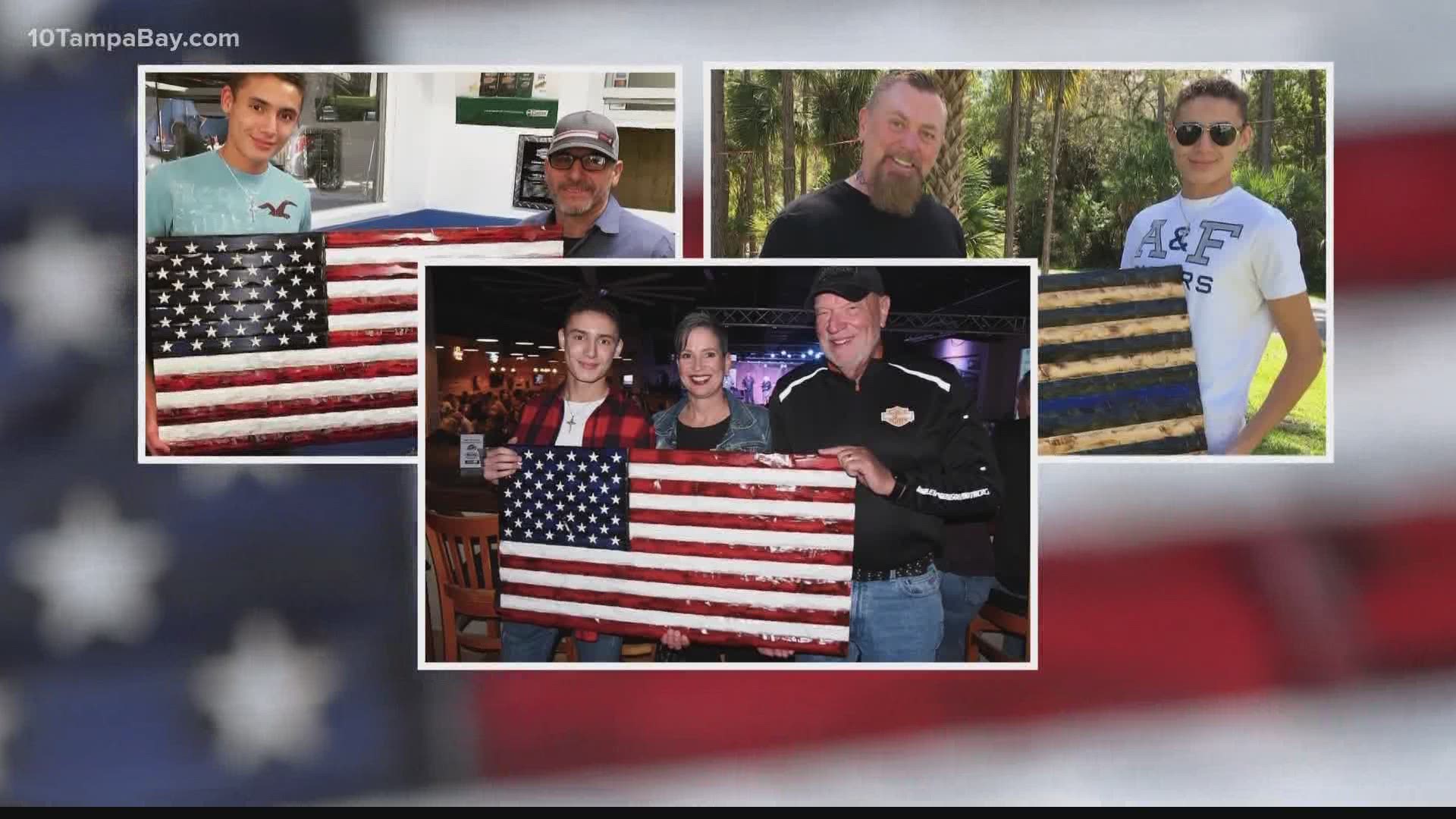 LAKEWOOD RANCH, Fla. — Lorenzo Liberti smiled at the entrance of his garage. Flanked for a half-dozen American flags that he made himself from pine wood, the Lakewood Ranch teenager seemed satisfied with the results of his summer’s work.

“It’s the American dream,” he said.

The dream to make three-foot flags from 1-x-2 inch boards, was born after a family trip to serve food at a homeless shelter. There, in 2019, Liberti, 15, met a homeless veteran. Their conversation launched a woodworking initiative for the high school sophomore.

“The most important thing with a story is to listen to it,” he said.

Brainstorming on how to help, Liberti, with the help of his father, Gaetano, started carving, sanding burning, staining, and polishing them until they shined. The results were a handmade creation designed to change the fortunes of men and women who served under the same colors.

“It’s really about giving back; him understanding that it’s not about him, that he’s capable of doing things that are above and beyond himself,” said Gaetano. “

The Liberti family moved to Florida from New Jersey six year ago. They have spent many hours in their garage working on flags since this project began about eight months ago. Lorenzo estimates each three-foot flag takes between 15-20 hours to complete. He also makes flags in one, five, and seven-foot lengths. Even his younger brother, Valentino, has given woodworking a try.

Lorenzo found the Bradenton-based Turning Points group, which provides services for homeless veterans and their families in Manatee County. The organization asked the teen to play the National Anthem on his violin during the 2019 Christmas fundraising. The two flags Lorenzo donated for auctioned fetched Turning Points $2,300 that night.

“My summer DIY project became a much bigger endeavor than I could've ever imagined,” he wrote on his flag website.

Lorenzo dreams of having a flag on display in one hospital per state around the nation. To fund his goal, he started a Go Fund Me page and plans to donate excess money to Turning Points. His hopes are to raise $20,000 for supplies and donate $30,000 to Turning Points. By the end of July, he’d raised over $1,200 for his cause.

I’m very certain that he’ll be able to accomplish it it’s just a matter of when,” said Gaetano.

Lorenzo has also supported Suncoast Charities for Children in Sarasota. He donated a flags to their Thunder by the Bay event and that flag sale raised $1,000 for children with special needs.

“It’s the veterans that keep me going,” said the teen.

Flags are for sale on his website. Lorenzo makes four different styles, including ones honoring police and firefighters.