Giovanni Cerro wrote his first poem at nine. Now, he wants to top one million. 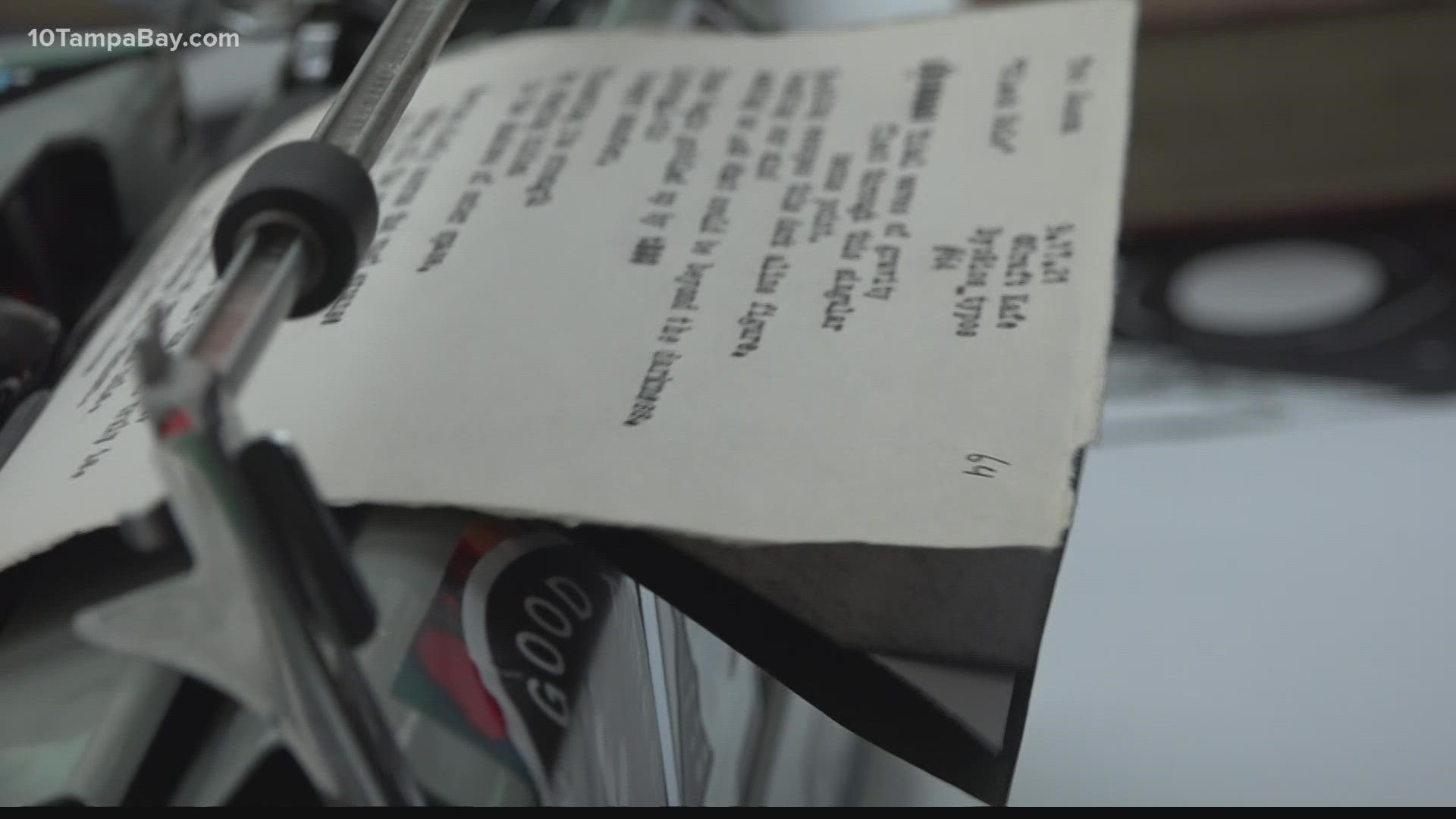 ST. PETERSBURG, Fla. — Giovanni Cerro remembers the first time he sat down to write for someone.

“I wrote my first poem when I was nine for my grandfather. It had a big impact on me. He cried,” said the St. Petersburg street poet.

That was over two decades ago and he hasn’t stopped writing.

“I can really change the way people feel with words, you know? That was powerful."

The 35-year-old is now a full-time "Poet for hire." He spends most of his days seated behind a small card table on street corners, in parks, at farmer’s markets, or under awnings of downtown restaurants. He’s armed with nothing but his typewriter, a stack of paper, and his thesaurus.

The banner draped over the front of his table reads ‘Gios Typo’ and, of course, it contains a typo. The writer did it on purpose. It’s an ode to the permanent nature of creating on a typewriter where mistakes can’t easily be hidden. Typewriters are his wording weapon of choice.

“It’s kind of like music, you know?” said Cerro of that iconic typewriter sound.

On a recent drizzling morning, Cerro set up at the Craft Kafe in downtown St. Pete where pedestrians dodged droplets, and diners enjoyed gluten-free fare under the restaurant’s covering. Cerro’s typewriter clicked away in rhythm with the raindrops. He composed two poems in just the first few minutes after arriving.

“It kind of makes you feel nice. It’s kind of like there’s an old-time thing going on,” said Jason Waits, who asked Cerro to write about black holes in space. “I haven’t heard a typewriter in a long time.”

Cerro typically asks customers to provide the first word that comes to mind. From there, he knocks out a freeform poem in just a few minutes. He asks the recipient to pay whatever they feel compelled to pay for his art. Typically, that ranges anywhere from $5 to $20.

“He’s been writing poems since I met him,” said his wife of nearly two years, Kayley Robsham.

Cerro has a mission – to write one million poems. He’s just underway. To date, he’s around the 4,000 mark. Baby steps, he says. The goal is a long-term one, he notes.

“I don’t see why he couldn’t do it,” said Robsham.

There is no way to speed through the process. That’s the part of his mission that Cerro embraces most. The journey is as important as the destination.

“Think about how many people are in the world,” said Cerro, noting there are billions of potential customers on the planet. “I’m not daunted.”

To accomplish the goal of one million poems, Cerro would need to write at least 55 poems per day for 50 years. It’s a difficult task, but doable.

“It’s not like, oh, if I don’t do it then I didn’t succeed,” he said. “Let’s just make some crazy goal and let’s just like go for it and not worry too much about if I make it but let’s see where I end up.”

Regardless of if he hits his goal or not, the process will have given Cerro the chance to meet thousands of people. That’s his genuine hope.

“It’s really about connection,” he said.