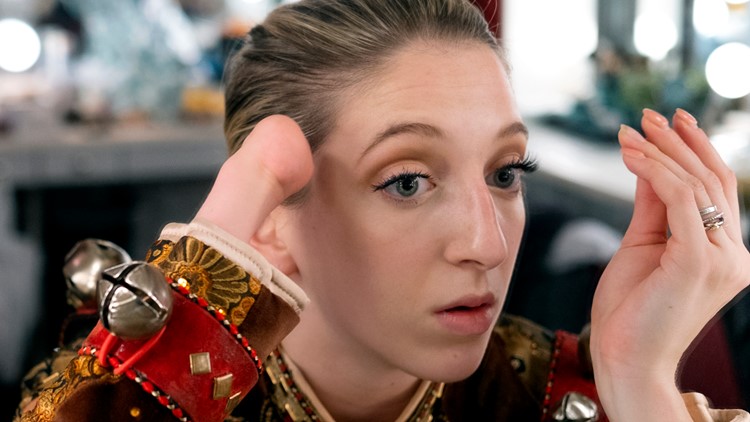 Photo by: AP
In this Monday, Dec. 2, 2019 photo, Rockette Sydney Mesher checks and eye lash extension she has just put on in her dressing room at Radio City Music Hall in New York. Mesher, who was born without a left hand due to the rare congenital condition symbrachydactyly, is the first person with a visible disability ever hired by New York's famed Radio City Rockettes. (AP Photo/Craig Ruttle)

NEW YORK — A dancer born with one hand is the first person with a visible disability ever hired by New York's famed Radio City Rockettes.

Sydney Mesher tells Newsday she doesn't want to be known as “the dancer with one hand” but as a hard worker.

"Being a Rockette, and being a Rockette with one hand -- I am groundbreaking in that sense," Mesher says. "So even though I don't consider my disability to be that challenging, I need to be in this position to let others have that opportunity," Mesher told ESPN.

Mesher is missing a left hand due to symbrachydactyly, a rare congenital condition.

Symbrachydactyly occurs in about one out of every 32,000 babies and affects boys and girls equally, according to Boston Children's Hospital.

The Pace University graduate from Portland, Oregon, says she's been “mesmerized” by the Rockettes ever since first seeing them on TV in the Macy's Thanksgiving Day Parade.

"When I started to dive into the technique of the Rockettes in college, I fell in love with the diligence and the specificity of it," Mesher told ESPN. "I kind of had tunnel vision for a bit," she continued. Several of her teachers at Pace were former Rockettes, according to ESPN.

RELATED: 'It's cool to be a good dad' | Watch these dads adorably crash their daughters' ballet class