'It's very painful' | Targeting political opponents and accusers, Justin Fairfax turns to the courts to prove his innocence

'You actually have subpoena power to finally compel people to testify, to get documents and records to get to the truth,' Fairfax said. 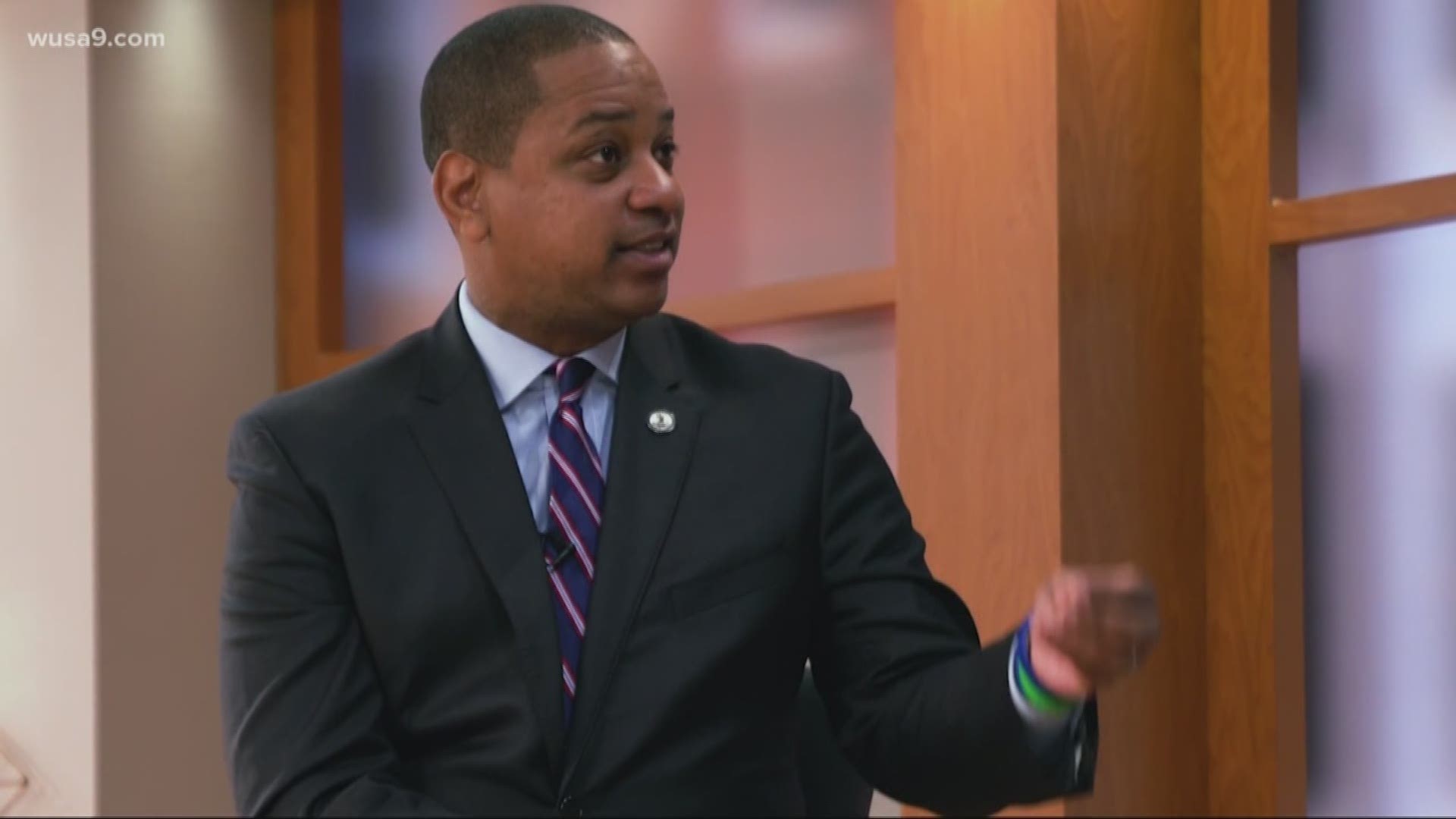 Governor Ralph Northam was engulfed in scandal and faced growing calls to step down after racist photos surfaced from his medical school yearbook.

For just a brief weekend in February, Fairfax was preparing to move his family from Northern Virginia to Richmond.

"I'm thinking about my family. I'm thinking about how this would change things for a lot of people," Fairfax said. "If he had made the decision to resign and I was elevated to the governorship, I also would've been the only African American governor in the entire United States of America."

RELATED: Virginia Gov. Northam reaffirms he will not resign in first interview since racist photo surfaced

RELATED: First lady of Virginia in hot water after handing cotton to African American students on tour of governor's mansion

Fairfax’s planning was cut short. He was labeled a rapist and predator after two women stepped forward and accused him of sexual assault.

Dr. Vanessa Tyson said Fairfax sexually assaulted her during the 2004 Democratic National Convention in Boston. Meredith Watson said the lieutenant governor raped her when they were students at Duke University in 2000.

During an interview with CBS News’ Gayle King, Tyson said their encounter in a hotel room started out with kissing and was “completely consensual.”

She says it changed as the two continued, and she described Fairfax as forceful.

“I couldn't feel my neck. I couldn't hold my head up," Tyson said to King. "He's using his hand on the back of my neck. And I still didn't know what was going wrong.”

Watson told King she felt Fairfax targeted her because he knew she was raped in the past.

"He knew that the year prior that I had been raped by someone and that nothing was done about it. And he was a very good friend to me,” Watson said to King. "Which is why I never would've expected anything like this from him."

Fairfax has categorically denied the allegations and said both encounters were consensual.

“We, over the last eight months since they first became public, have done absolutely everything you'd want someone to do to try to get to the truth of the matter and make that truth known,” Fairfax said to WUSA’s Lorenzo Hall.

His accusers requested a public hearing before Virginia lawmakers. Republicans and Democrats were in talks to organize a forum for Tyson and Watson to testify.

However, Fairfax and some Democrats called it, “political theater.” Republicans are still seeking a hearing for the lieutenant governor's accusers.

Fairfax wants prosecutors and law enforcement agencies to investigate the sexual assault claims. He is looking to make a run for the governorship in 2021 and these accusations will likely be used against him.

The Virginia GOP was already running an ad in Northern Virginia leading up to Tuesday's election criticizing Democrats for "silencing" Fairfax's accusers.

To speed up the process of clearing his name, Fairfax is using the courts and a defamation lawsuit against CBS for the interview it aired with Watson and Tyson.

"It's very painful, for someone to falsely accuse you of something," Fairfax said.

He also spoke candidly about the impact of sex assault accusations on his family.

Below, Justin Fairfax talks with WUSA9's Lorenzo Hall about the allegations against him:

“That's the thing about a court case. You actually have subpoena power to finally compel people to testify, to get documents and records to get to the truth and get people under oath,” he continued.

Aside from poking holes in the accounts of his accusers, Fairfax targeted his political opponents, among them Richmond Mayor Levar Stoney, a rising star in the state’s Democratic party.

Fairfax said Stoney sees him as a political rival and insists the mayor tried to derail his ascent to governor.

Outlined in the lawsuit against CBS is a claim by Fairfax that states associates of Stoney pressured Tyson to go public with her accusation during the weekend of Northam’s scandal.

"It was no accident that Tyson’s private message ended up in the mainstream
media, as this had been the plan all along," the lawsuit states.

One text included in court filings is what Fairfax says is a message to Tyson from an associate of one of Stoney's staffers.

It reads, “Friend, Northam may be forced to resign tomorrow. Thad and I think your story should get to the local press TODAY, rather than later.”

Credit: Justin Fairfax
Messages Fairfax claims are between an associate of Stoney and Vanessa Tyson.

A spokesperson for Stoney said by email, “The insinuation is 100 percent untrue, and frankly, it’s offensive.”

A lawyer for Watson said her client would still like to testify.

Tyson’s lawyer, Lisa Banks said, “Dr. Tyson is fully prepared to testify before the Virginia General Assembly and has consistently called for lawmakers to convene a bipartisan hearing. She has also left open all options with respect to pursuing criminal claims with the D.A.’s office in Suffolk County, Massachusetts.”

CBS has asked a judge to dismiss Fairfax’s defamation lawsuit, claiming it’s baseless and is being used to silence his accusers and attack his opponents.

A hearing on CBS’ motion to dismiss is scheduled for Dec. 6.

Prior to his lawsuit against CBS, Fairfax has also used other avenues to try and prove his innocence.

He submitted to two polygraph tests and released a statement that said he passed – which, he said, further illustrated his innocence.
.
Fairfax also pleaded before his colleagues in the general assembly before 2019’s session wrapped up. That plea made national headlines when he compared his situation to a lynching.

“I’ve heard much about anti-lynching on the floor of this very Senate, where people were not given any due process whatsoever, and we rue that,” he said at the dais in late February. “We talk about hundreds, at least 100 terror lynchings that have happened in the Commonwealth of Virginia under those very same auspices. And yet we stand here in a rush to judgment with nothing but accusations and no facts, and we decide that we are willing to do the same thing."

He also stepped down from the Northern Virginia law firm where he was a partner to focus solely on the job of lieutenant governor – usually a more ceremonial role in the state which pays only $36,000 a year.

“There's obviously people out there who didn't want to see me in this position. Right? They were willing to do things to try to stop me from serving in that role or from advancing,” Fairfax said.

Fairfax said there may be further litigation. 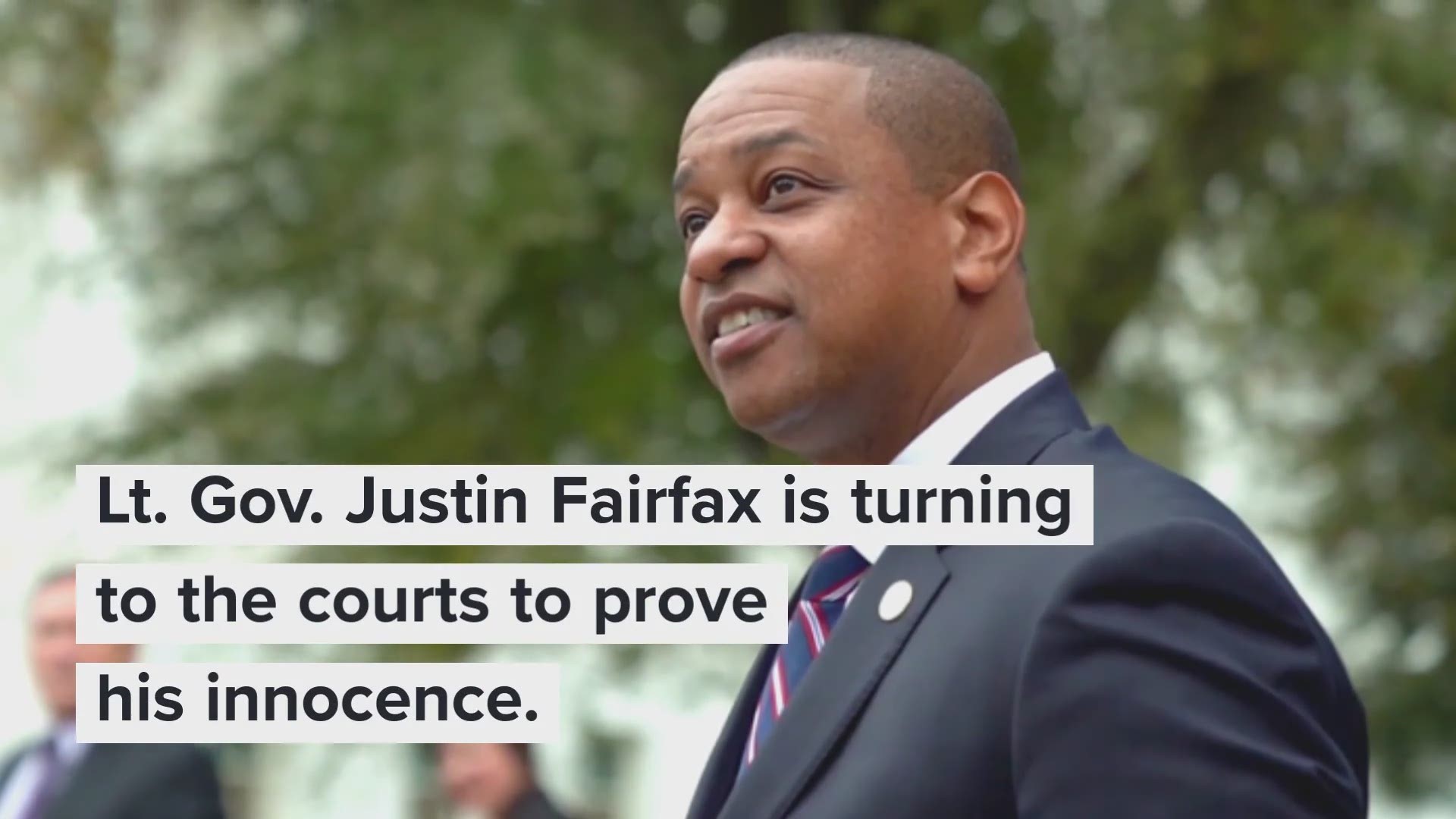