Unable to walk, Boone the Raccoon gets his wheels

The adorable raccoon suffers from a brain disease that impairs his ability to walk. 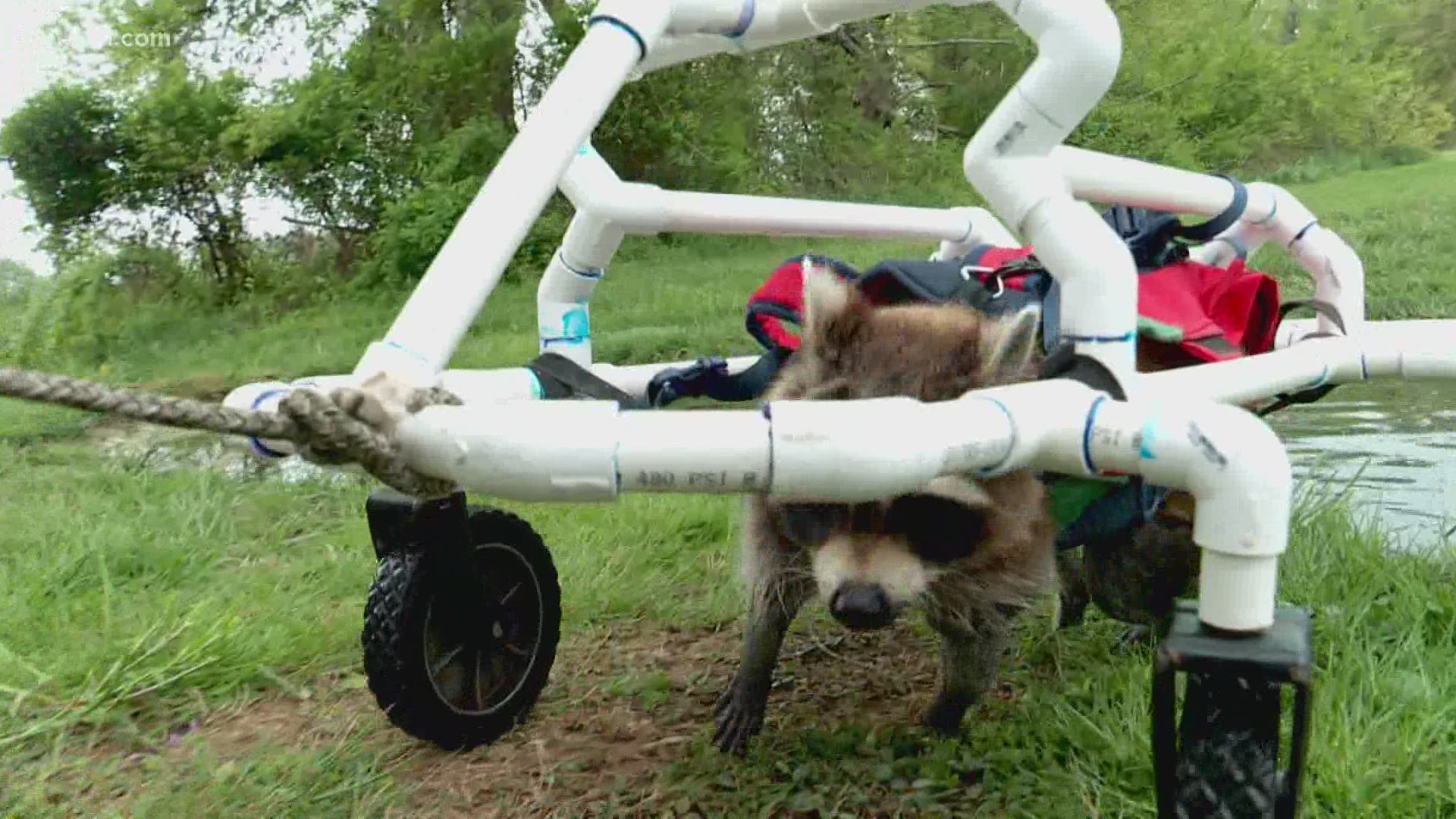 HARDIN COUNTY, Ky. — There are more than a dozen animals at Nolin River Wildlife in Hardin County, from dogs and cats to foxes and even opossums. But there's one furry friend you can't help but notice.

Boone the Raccoon is a one-year-old, 20-pound raccoon that was first brought to Nolin River Wildlife, a wildlife sanctuary, last May. While the sanctuary has other raccoons, this is the only one so far that has its own custom wheelchair.

"I cried when I saw him get in the chair and actually move for the first time," executive director of Nolin River Wildlife Mary Key said. "And his little face was so - he gets this real engaged look about him. He was thrilled and he still is. He fusses to get in it now."

"We didn't know there was an issue until it was time for him to start walking, and then when it was about three weeks old, four weeks old, he started doing a lot of this and falling over," she said.

According to Key, Boone was diagnosed with cerebellar hypoplasia, which means the base of his brain was never fully developed, which is why he was never able to learn to walk.

Key said after seeing Boone struggle to move, she reached out to Central Hardin High School, where a class of engineering students decided to build Boone a customized and adjustable wheelchair made out of PVC pipes.

"It was so fun to listen to them kind of talking about all the adjustments they needed to make and what they could do here," Key said. "A lot of it I didn't understand because it was the language of engineers."

Boone is not in pain and actually lives a good life despite not being able to walk on his own, according to Key. She said Boone loves to eat and play with his best friend Benton, a Great Pyrenees that is around 10 times Boone's size.

She said Boone also loves to dance to music when there's a good beat, especially songs by Earth, Wind & Fire.

"He's an extremely happy raccoon," she said. "He has this thing - I swear this is true - he jumps up and down. he gets in your lap and it's certain kinds of music, not just any kind."

Key said she started the wildlife sanctuary five years earlier to help rehab injured animals. Most of the animals are released back into the wild after they are healed, but she said Boone's condition would not allow him to survive if released.

Instead, he has become an ambassador for the refuge and Key hopes is a way to help advance her mission of promoting a peaceful co-existence between humans and wildlife, even those considered to be "nuisance animals."

"The message that they give us when you've done something like this and the joy and the love he spreads is so much more than I ever could have imagined," she said.