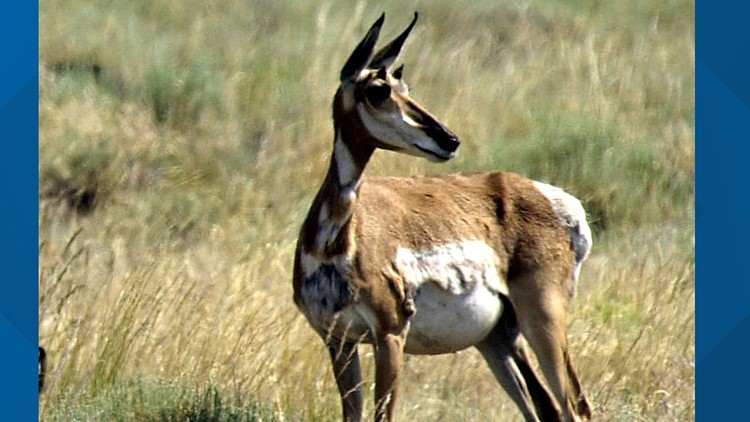 BELLEVUE, Idaho — The helicopter banked left and tracked its quarry over the field for about 10 seconds before the net gun went off with a distant pop. The chopper touched down abruptly and two men, helmeted and clad in orange, leaped out and bolted toward the captured pronghorn.

It was an unwelcome surprise for an animal that had been calmly grazing in a green-gold field, back dropped by the Sawtooths. But the Idaho Fish and Game Magic Valley Regional Office had good reasons Aug. 8 for descending on pronghorn from the sky and capturing them with nets fired from guns. Compared to other big game species, like elk and mule deer, pronghorn in Idaho are understudied.

"We know they summer in one place and winter in another," Magic Valley Region Fish and Game Wildlife Manager Mike McDonald said. "What we don't know is how they get there."

Fish and Game hasn't captured and collared pronghorn much in the past. This summer's two-day effort, which resulted in 24 newly collared animals in Camas and Blaine counties will dramatically increase the agency's knowledge of local pronghorn.

"This is part of putting together a database," McDonald said.

When big game animals cross busy roads, crashes that endanger both animal and driver are inevitable. If Fish and Game can learn where pronghorn cross, the agency can devise strategies to make crossings safer.

U.S. Highway 20 is a hot spot for pronghorn crossings. The animals need to cross, but they could benefit from crossing structures, such as an overpass.

When it comes to wildlife crossings, pronghorn are a bit picky.

"They've got to go over," McDonald said. "They don't like underpasses."

Overpasses and underpasses are expensive — they can cost millions of dollars — so it's important to pinpoint areas of high crossing density before breaking ground.

Today, Fish and Game is essentially working with anecdotal data when it comes to pronghorn. Pronghorn summering in Blaine and Camas counties might be wintering in the King Hill area in Elmore County or north of Gooding. They might be spending the cold months near Eden or Hazelton in Jerome County. Many pronghorn winter at Mountain Home, but Fish and Game isn't sure where those animals are summering.

Figuring out pronghorn road crossing preferences is important, but there are also more general reasons for studying the species better.

"This collar data is going to allow us better insight into the daily activities of these animals across the whole year," Idaho Fish and Game Regional Wildlife Biologist Sierra Robatcek said.

Fish and Game is making a significant investment in order to beef up its pronghorn knowledge. Between helicopter costs and a roughly $600 collar, it costs about $1,000 to capture a pronghorn.

That cost could easily be worthwhile if it helps Fish and Game conserve pronghorn while south-central Idaho's landscape changes. The Magic Valley could be seeing new solar, wind or hydroelectric projects in the coming years.

"That's great, but it's also concerning from a migration standpoint," Robatcek said.

Big projects can have big impacts on pronghorn. If Fish and Game can identify critical habitat, the agency can work to ensure that pronghorn don't run out of the land they need for survival.

"It will help us try to guide development in these areas that are really critical to pronghorn," Robatcek said.

From a capture perspective, pronghorn are a bit more fragile. They're also incredibly fast, capable of running 60 mph.

"Capture is kind of bittersweet," Robatcek said. "It's really fun to be interacting with animals that closely — that's why I became a biologist. But there's also this risk to the animal and to the people."

There are a number of precautions Fish and Game has to take when capturing pronghorn. They can't chase the animals for more than three minutes, because pronghorn can literally run themselves to death. Lactic acid build up can cause muscle death, which can kill the animal in a slow, agonizing way.

It's also important to process a pronghorn quickly. After the helicopter swoops low over a pronghorn and the gunner pulls the trigger on the net gun, it's critical for the two-person processing crew move fast.

"The younger you are, the more fun it is," Idaho Fish and Game Senior Wildlife Technician Clint Rasmussen said with a grin.

The crew extracts the pronghorn from the net and pins the animal safely to the ground. A blindfold relaxes the animal a bit, but a pronghorn will still grunt and moan loudly while being handled. The crew processing the pronghorn pay careful attention to the animal to ensure that it doesn't overheat. If at any point the pronghorn appears too stressed, the processors let the animal go.

"Our priority is keeping the animal alive," Robatcek said. "There's no point in putting a collar on a dead animal."

While they collar the pronghorn, the crew also takes a fecal sample (if possible), tags the ear and extracts blood. Then the technician will carefully unwrap their legs from the pronghorn and let it run away, no worse for wear but with a new, high-tech necklace. The whole process only takes a few minutes.

Idaho Fish and Game's Ryan Walrath and Jon Prokott processed a pronghorn at the Heart Rock Ranch near Bellevue Aug. 8. Both Walrath and Prokott come with a wealth of experience, Robatcek said.

"Those two are fantastic, they're some our quickest," she said. "They're light, agile, speedy guys. They care tremendously about the animal."

Walrath said that the animal he and Prokott processed Aug. 8. was in good shape.

"She was good," the Magic Valley Region Fish and Game Senior Wildlife Technician said. "She was strong, good, healthy, a fighter."

Working with pronghorn isn't all helicopter chases, firing net guns and processing the animal. It's also a lot of waiting.

"I've had to shave twice," Heart Rock Ranch Owner Harry Hagey said with a grin while waiting for the helicopter crew to arrive. "(The pronghorn) have dropped dead from old age."

But the early mornings and long waits, Fish and Game biologists look forward to the days they get to fly and work with animals in a hands-on way.

Robatcek said she thinks pronghorn are a bit of a forgotten animal in Idaho. Hunters can talk about goats, sheep, elk, mule deer and moose for hours without even mentioning pronghorn. She said that this new data will be a great benefit for Idaho pronghorn, and she hopes people take time to notice the animals.

"Pronghorn, a lot of people don't think they taste very good, or they live in this habitat that's often driven by on your way to something prettier," Robatcek said. "I think they don't get the attention they deserve."