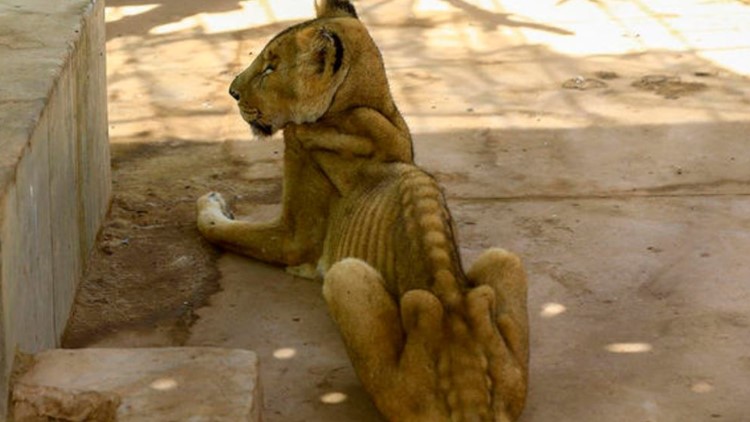 Photo by: ASHRAF SHAZLY
A malnourished lioness sits in her cage at the Al-Qureshi park in the Sudanese capital Khartoum on January 19, 2020

A movement to save a group of malnourished and mistreated lions in Sudan has gone global. The hashtag #sudananimalrescue began trending over the weekend after photos emerged showing the lions at Khartoum's Al-Qureshi Park.

Activist Osman Salih posted images of the big cats on Saturday, writing in a Facebook post that "seeing these animals caged and be treated this way made my blood boil."

Some of the lions were mere skin and bones, while others appeared to have untreated conditions such as wounds on their faces. One lion is believed to have died on Monday, according to Salih.

"I regret to inform you that the sick female lion has died," Salih said in a post. "The other female is getting better and the male is OK."

An official confirmed the news of the lion's death to AFP. Park officials blamed Sudan's economic crisis for the lions' poor treatment and say they have gone weeks without the proper amount of food and medication. Some lions are believed to have lost more than two-thirds of their body weight.

A group of activists came to the park on Saturday after seeing Salih's social media post. Salih suggests bringing food directly to the lions rather than donating to Al-Qureshi.

According to the World Wildlife Foundation, African lions are a vulnerable species, with just 23,000 remaining. Their numbers have plummeted 40% over the last three generations, WWF claims.

RELATED: Good job, Patsy! Meet the heroic dog who saved hundreds of sheep from the raging fires in Australia