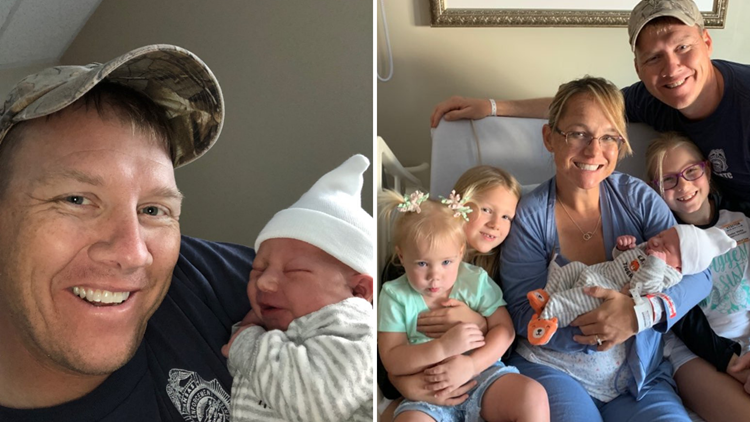 Rob Millerbernd was on three-day leave for the birth of his son. Little did he know his prayer to be involved in the birth would be delivering him in the car.
Author: WCNC Staff
Published: 8:14 AM EDT August 16, 2019
Updated: 10:33 AM EDT August 17, 2019

GOOSE CREEK, S.C. — A South Carolina family has quite the story tell about the birth of their fourth child, who was delivered by his dad in the family car on the side of the road.

Rob Millerbernd was speeding down 526 near Wando when his wife Nikki's water broke around 2 a.m. on August 9. She immediately went into labor, so the U.S. Navy Master at Arms jumped into action.

"I called 911 to tell them what was going on," Millerbernd said. "They told me they would send an alert to the officers with the car description. I had my caution lights on and ran a red light."

Their baby boy wasn't scheduled to arrive until later that day. He wasn't waiting.

Millerbernd drove down from training in Virginia on three-day leave for Wyatt's birth. On the drive down, he said a prayer that he'd be allowed to take part in the birth. His prayer was answered and then some.

Just after 2:30 a.m., Rob said he pulled over just as Wyatt was making his entrance. The umbilical cord was wrapped around his neck, so Millerbernd did what he called a "delicate dance" to unwrap the cord so the newborn could breathe. As soon as he heard Wyatt cry, he jumped back behind the wheel and drove Nikki to the hospital.

After doctors checked on the family to make sure they were OK, Rob cut the umbilical cord. The bundle of joy weighed in at 7 pounds, 3 ounces.

The family said Rob will head back to Virginia for more training before returning to spend time with family before his October deployment.

RELATED: 'I pulled the baby out' | SC mom delivers her own daughter

RELATED: Dad delivers baby on side of I-77