'I got plenty,' says Vietnam veteran whose bluebonnet fields in Ennis are nothing short of breathtaking

Joe Dolezalik's farm in Ennis has 35 flush acres of bluebonnets. It's been a popular spot for photos this year, and the visits bring new meaning to the Vietnam vet. 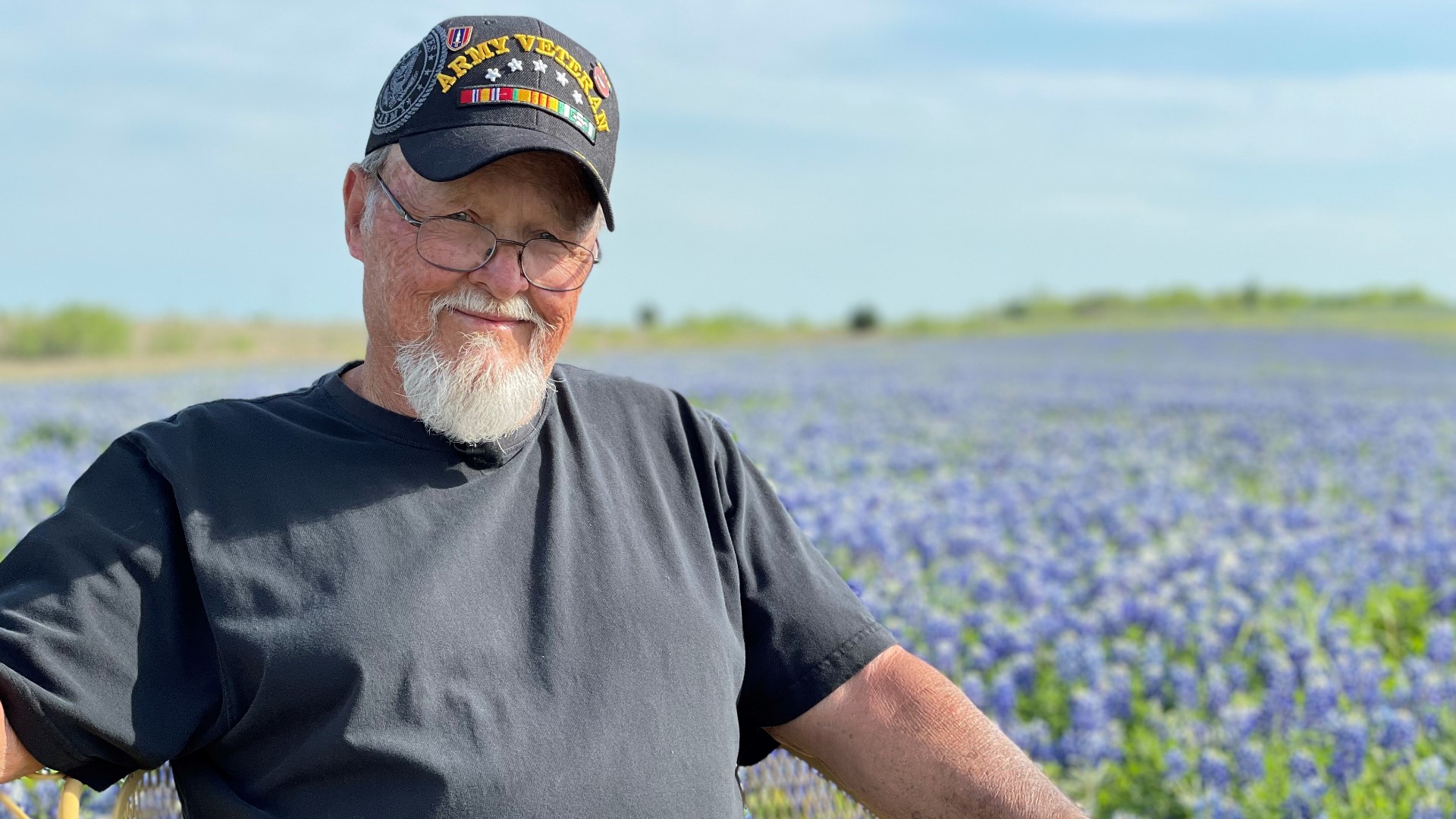 ENNIS, Texas — On Zmolek Road in Ennis, just off Interstate 45 near Love's gas station, you'll feel a lot of open country. Cows, horses, empty fields of green grass; the kind of stuff every Texan loves about their state.

Eventually, you'll pass Joe Dolezalik's farm, and if It's April, your jaw will most certainly drop.

Dolezalik, 74, met WFAA on a Gator UTV at the front of his property as hundreds of thousands of bluebonnets blew in the wind behind him.

Credit: Matt Howerton
Joe Dolezalik, 74, poses in front of his iconic bluebonnet fields. He says about 35 acres of his property are covered with the beloved Texas flower.

His property has roughly 35 to 40 acres of tall and flush bluebonnets that would make any photographer drool.

And even though they're on private property, Dolezalik doesn't mind people coming by to take pictures, especially before the flowers disappear and go back to seed.

"Don't sit outside by the road," Dolezalik laughed. "Come on in, and I'll tell you where to go."

Dolezalik is a proud Army veteran who fought in the Vietnam War. He served one tour from 1966 to 1967 and was honorably discharged in 1969.

But before all of that, he worked on his family's farm, which has been around for 108 years.

"We had a bit of everything. Corn, cotton, hay and cattle," Dolezalik said.

Now, Dolezalik has bluebonnets. He said they started to really grow around five years ago.

"Every year, it seems like there's a million more," Dolezalik said with a laugh.

Credit: Matt Howerton
A photo of what Dolezalik sees when he leaves his backdoor.

The City of Ennis publishes Dolezalik's property as one of its bluebonnet trails to visit during April.

Visitors head to the town during the Ennis Bluebonnet Trails Festival, an annual weekend celebration in late April.

However, last year the festival was canceled due to stay-at-home orders influenced by the pandemic.

Dolezalik said he stayed busy on his property while the world shut down but missed the photo visits he had gotten used to seeing.

This year, that changed. The festival came back as more and more vaccine shots get into arms.

Dolezalik said people have been coming to his property in droves. He often takes people around on his Gator UTV to show them the best spots to take pictures.

He's had conversations with people from across the nation this wildflower season, even some from overseas.

Those conversations mean a lot to the Vietnam veteran who missed out on them in 2020.

"They think that this is the best place in the world. I always tell them they oughta buy it," Dolezalik said with a laugh.

Photographers were already roaming around Dolezalik's gate when WFAA showed up.

He said he loves the interest but knows it will all go away when the bluebonnets do.

Until then, he says, come soak it in while it lasts.

"Just come back here and take them, take some pictures," Dolezalik said.

"Then you can know you've seen the best."

Credit: Matt Howerton
A photo of the bluebonnets on Dolezalik's property.