On average, nearly 20 people per minute are physically abused by an intimate partner in the United States. 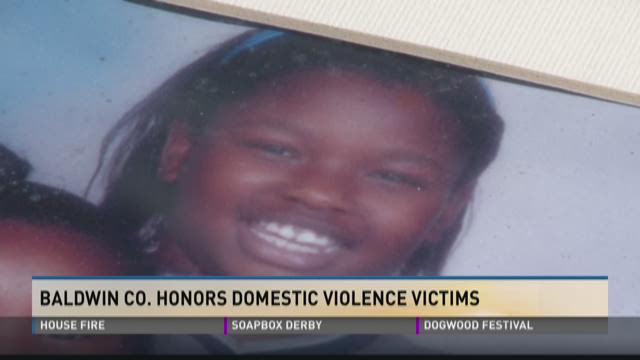 On average, nearly 20 people per minute are physically abused by an intimate partner in the United States. That’s more than 10 million women and men every year, according to the National Coalition Against Domestic Violence or NCADV.

On Saturday, domestic abuse survivors in Baldwin County remembered those who have lost their lives to domestic violence.

“My mom was killed April 4th, 2000, at Sears in Milledgeville,” said Saulsbury, “she was shot by my father.”

Saulsbury was 10 years old and at her after school program when it happened.

“I remember two officers coming to get me. I remember them saying ‘your mom got hurt.’ The first thing I asked is ‘where are my sisters and my brother?’” said Saulsbury.

She said she just knew her mother was gone. As a little girl she thought her parent’s relationship was normal.

Baldwin County Solicitor General Maxine Blackwell, who hosts the annual event, remembers that case. She says it was in the middle of a time period where they saw a lot of domestic violence.

In recent years the number of cases has leveled off in Baldwin County, but Major John Davis with Milledgeville Police says it’s still an issue for them.

“Domestic violence is an everyday call for our patrol units. They respond to one or two a day,” said Davis.

Most of the calls are the result of a fight where someone is punched, shoved, knocked around or threatened.

“We get the domestic violence when it’s at a level that someone has not been shot, stabbed, or killed and our goal is to make sure it doesn’t reach that level,” said Blackwell.

The goal for the vigil is to create awareness for domestic violence while helping loved ones cope and remember victims.

According to NCADV, nearly 30,000 victims were helped by Georgia domestic violence services in 2013.

If you live in Baldwin County and are a victim or know someone who is, you can call the Baldwin Solicitors office at 478-445-4445 or dial 911 if it's an emergency.

If you don't live in Baldwin County and need help, click here for resources in your area.