46 times a day. That's the number of times we're told drivers are breaking the law in Cobb County and flying past the flashing stop sign on school buses - and it's all caught on video. 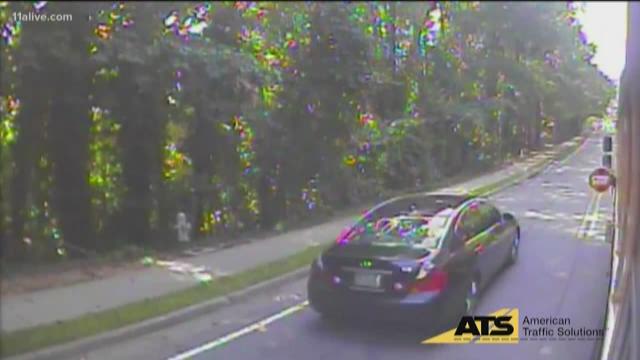 Thirty drivers caught on video blowing past stopped school buses have all been sent home by a judge in Cobb County - and not prosecuted. But why?

11Alive spent the day trying to answer that question and the lawmaker who authored the law to make this illegal said he's surprised. Meanwhile, parents are concerned and the school district is dumbfounded. They're all demanding to know why lives of their students don't seem to matter more.

On any given school day in Cobb County, 80,000 students are transported with 84,000 stops. So, how many times are those students lives put at risk?

46 times a day. That's the number of times we're told drivers are breaking the law in Cobb County and flying past the flashing stop sign on school buses - and it's all caught on video.

Legislation passed in 2011 made it legal to fine drivers based on camera recordings from school buses. In fact, Cobb County was the first school district in the state to put cameras on their buses.

"To my knowledge, everything was going well," Parsons said.

That is, until the end of 2017 when concerns were raised to the Cobb County attorney.

"They seem to have a problem with the fact that the records are kept for violation are actually kept by a third party company that provides the video equipment," Parsons said.

Another huge issue in question: Nothing in the statute says what happens if the $300 fine is not paid. Now Parsons is committed to getting the problem fixed by working on an amendment to the current bill.

"This is the most important legislation, in my opinion, that I am working on this year," he said.

Parsons said he hopes to introduce that new bill in the next few weeks but he also mentioned that no other county seems to be having an issue with the current law other than Cobb County. He will also look into the courts that are hearing the cases - because that varies from county to county.