Does the new food stamp rule affect you in Georgia?

A look at what's changing in the SNAP program. 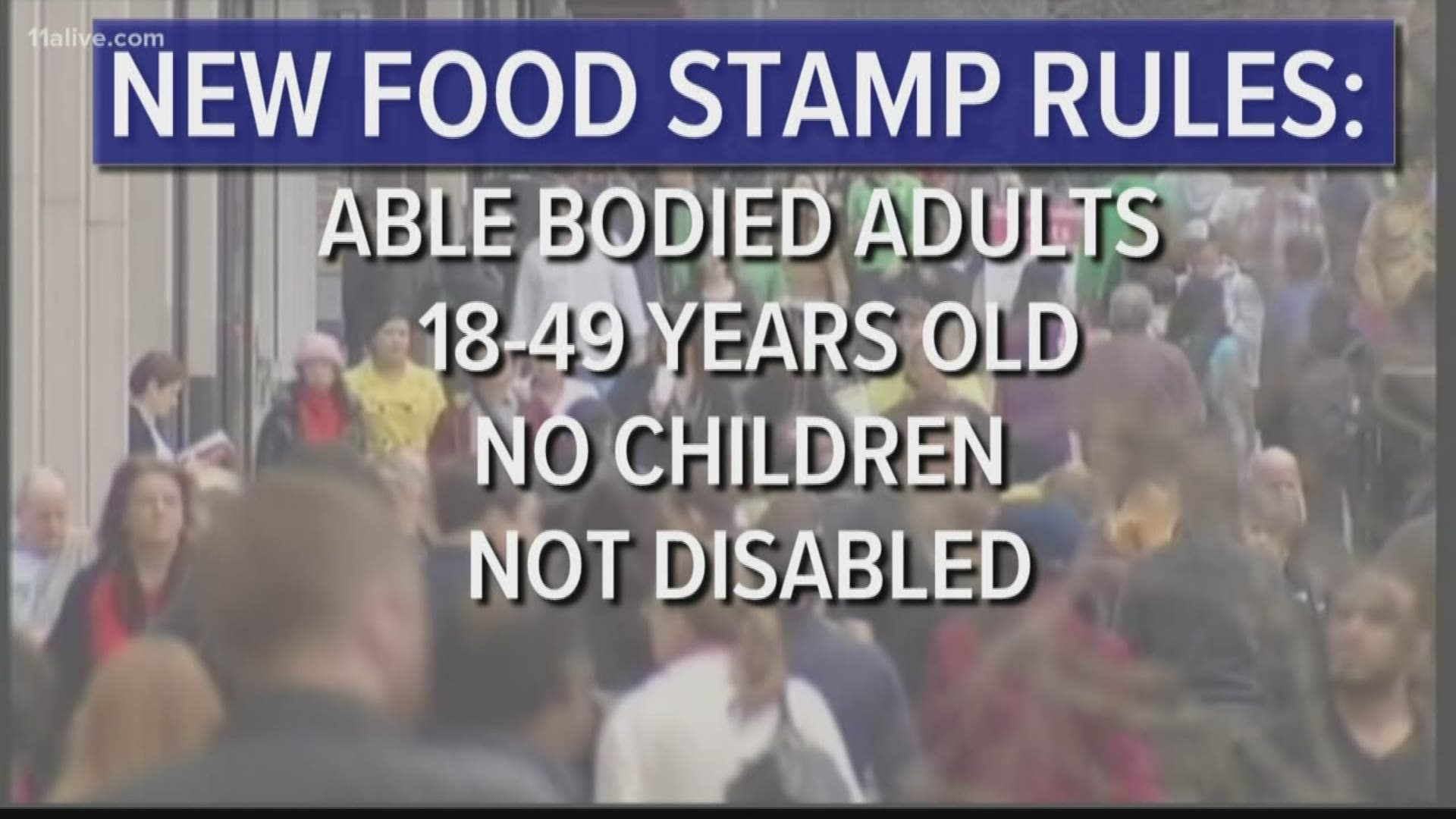 ATLANTA — On Tuesday the government announced a rule change to the Supplemental Nutrition Assistance Program (SNAP) - popularly known as food stamps - that seeks to limit a certain work requirement exemption.

The new rule specifically affects those classified as an able-bodied adult without dependents - basically, any working-age adult without disabilities or children - who have been receiving food stamps.

It's a little complicated, but it works like this:

Currently, all food stamp recipients are subject to work requirement rules unless they meet certain exceptions (you can see what those are here), and anyone who receives food stamps can only get them for three months in a 36-month period (the current 36-month period began in December 2017 and ends in November 2020).

There are exceptions to the three-month rule, as well - pregnant women, people who have a child in the household and people who are unable to work due to "physical or mental limitation" are some examples (again, see here for more specific info.)

This is where the new rule comes in - those exempted from the three-month rule have also included people who live in particularly hard-hit economic areas, defined as areas "that have an unemployment rate of over 10 percent or a lack of sufficient jobs." Typically, that works through states requesting waivers for certain counties or, in some instances, obtaining a waiver for the entire state.

The U.S. Department of Agriculture, which runs SNAP, has now tightened those rules on the time-limit waivers, effective March 31, 2020.

According to The Associated Press, this will cut off food stamps to about 688,000 people nationally.

Does this affect me in Georgia?

The short answer is it could possibly affect a small percentage of state SNAP recipients.

According to federal data, there were about 1.3 million people in Georgia on food stamps as of August 2019, the most recent month for which there is data.

According to the Georgia Budget and Policy Institute, about 120,000 people classified as able-bodied adults without dependents in Georgia receive SNAP benefits every month. Of those, it's not clear how many receive their benefits with a three-month time limit waiver.

RELATED: New food stamp rule proposal: How it affects you

The GBPI said that 93 Georgia counties used the time-limit waivers in 2018, but the state announced last year it was expanding the time-limit rule to all 159 counties for the 2020 calendar year.

A number of counties were designated "time-limit preparation counties" this year, where people would still be exempt, but that designation expires at the end of December.

Under the new federal rule, areas would need a six percent total unemployment rate to qualify for waivers. That would only apply to three Georgia counties as of Oct. 2019 data: Wheeler, Telfair, and Clay Counties, with a combined population of fewer than 30,000 people.

It's not clear if Georgia would revise its plan to apply the three-month limit to every county or still seek waivers for those three under the new federal rule.

Those classified as able-bodied adults without dependents who currently are not working and receiving benefits with a three-month waiver will need to meet work requirements as outlined by the Georgia Division of Family and Children Service, which administers food stamps in the state: