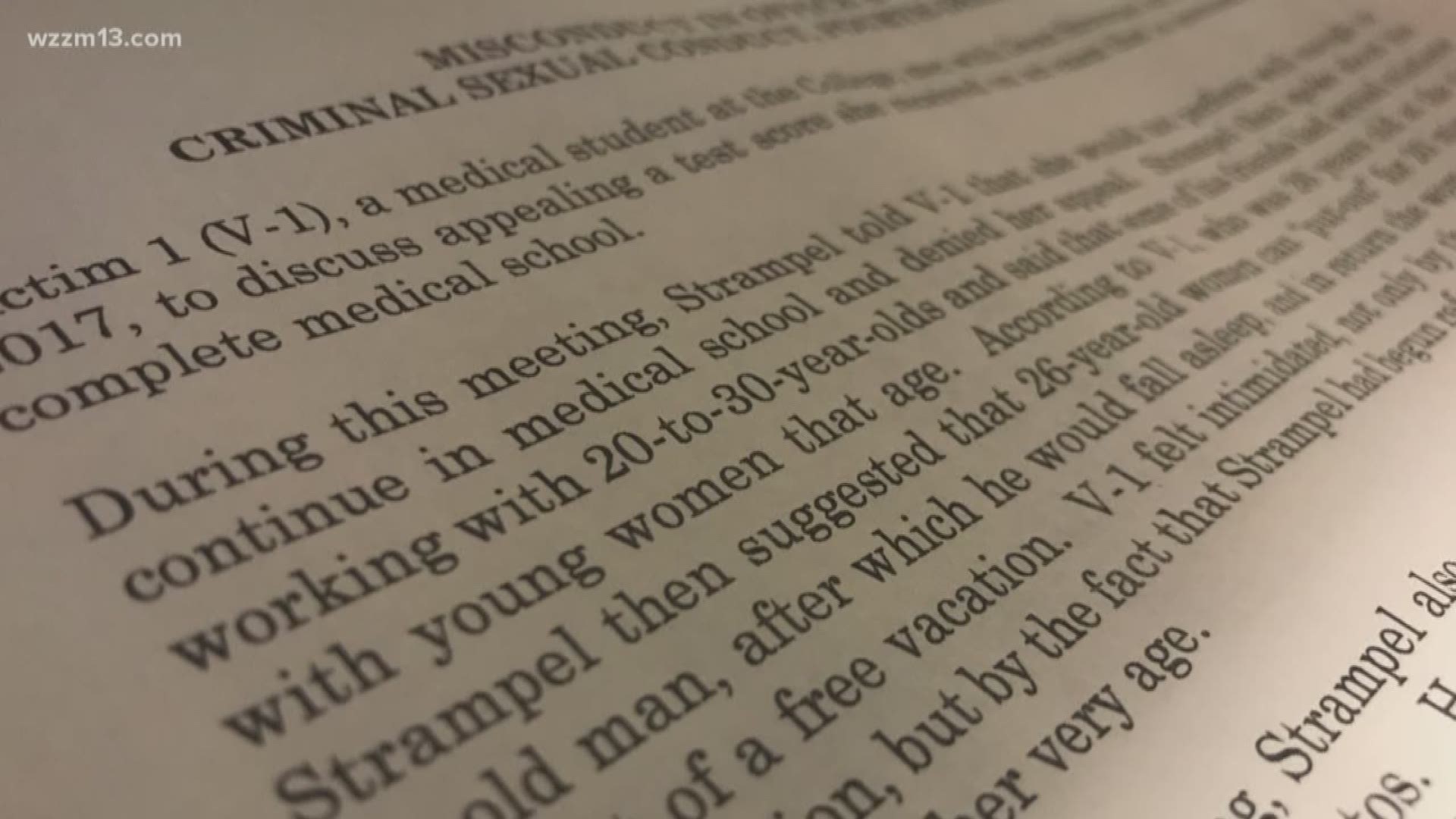 The former dean of MSU's College of Osteopathic Medicine will face charges of felony misconduct in office, fourth-degree criminal sexual conduct and two additional misdemeanors, according to documents presented in East Lansing's 54B District Court this morning.

Warrants were issued for Dr. William Derkey Strampel, 70, on Tuesday morning by Judge Richard Ball, who arraigned Strampel in the afternoon via a video connection. Strampel had been in custody since Monday night, which he spent in the Ingham County Jail.

The charges are the first related to a Michigan Attorney General's investigation of sexual misconduct at Michigan State University that was announced in January amid two sentencing hearings for disgraced sports medicine doctor Larry Nassar who sexually abused hundreds of patients. Strampel was Nassar's boss.

Ball set a personal recognizance bond at $25,000, meaning Strampel can be released without payment but would be required to pay $25,000 if he fails to appear in court. Ball also ordered that he not contact victims or witnesses, that he have no contact with current or past medical students and that he not travel out of state. A preliminary hearing was set for May 3.

Strampel denies inappropriately touching anyone and denied that there was any "quid pro quo for sexual favors in exchange for any type of standing within the university’s medical school," John Dakmak, Strampel’s attorney told reporters after the arraignment. He added that Strampel had no romantic or sexual relationships with any medical students.

Two of the misdemeanor charges Strampel faces relate to the 2014 Title IX investigation of Nassar, during which Strampel received regular updates.

"The idea that my client neglected his duty, that will be mete out in court," Dakmak said. "And we expect to prevail on that."

Here, just read it. This is the affidavit’s conclusion: pic.twitter.com/PRHTV0Ki5c

The affidavit presented in court included allegations from four female medical students. The document says that Strampel groped two of the victims, made inappropriate sexual comments to numerous students and that investigators found pornographic images on his work computer, among other details.

The AG's investigation, which is being led by special prosecutor William Forsyth, was announced amid two sentencing hearings for Nassar. Forsyth's first request for documents revealed Strampel was an early focus.

During a news conference on Tuesday, Forsyth said his investigation received a credible tip about Strampel so it obtained a search warrant before the university could provide documents. Asked if the search was a political stunt, Forsyth said "We did what we felt we needed to do" and the search led them to where they are now.

The willful neglect of duty charges relate to Strampel's actions during and after Nassar's 2014 Title IX investigation, according to the affidavit.

The felony charge relates to a series of sexually inappropriate comments made to at least four female students as early as 2006, according to the affidavit filed by Michigan State Police Detective. Lt. Ryan Pennellin support of the charges.

The affidavit details sexually inappropriate comments to at least four female patients going back to 2010.

Comments include that female medical students needed to dress sexier, telling a woman to turn around so he could look at her body.

Allegations from three of the four victims involve misconduct during meetings with Strampel to discuss low test scores. One alleged inappropriate behavior by Strampel on at least four occasions over four years.

Additional details from the affidavit include:

In either 2006 or 2007, Strampel had a conversation with a woman, identified only as Victim 4, at a local flu clinic and turned the conversation to drinking. He then said how "it was good when women were drunk, because then it was easy to have sex with them."

During the college's annual ball in 2010, Strampel approached the woman from behind and grabbed her right buttock. The woman didn't report it then, she told police, because she "did not want to be thrown out of medical school."

A forensic examination of Strampel's work computer found about 50 photographs of "bare vaginas, nude and semi-nude women, sex toys, and pornography," according to the affidavit. Police said many of the photos appeared to be "selfies" of female MSU students and that it appeared someone had tried to delete the photos. He solicited nude photos from at least one female student, the affidavit says.

"Also uncovered on Strampel's work computer were pornographic videos and a video of Dr. Larry Nassar performing 'treatment' on a young female patient," the affidavit said.

Dakmak said it's likely that the video referenced in the affidavit is one of the ones Nassar used to teach his techniques around the country.

In 2011, a woman identified as Victim 2 fell asleep in class and he summoned her to his office later. He told her not to sit down but to turn around twice so he could observe her body, she told police, before going on a rant degrading her body.

The woman told police Strampel told her she needs to dress sexier if she wanted to advance in her profession. The conversation lasted about an hour and Strampel never brought up a reason for the meeting.

Years later, she met with Strampel again to address complaints about her surgical residency. When she walked in the room he again told her to turn around twice. He later told her that she needed to learn her place in life and said, "what do I have to do to teach you to be submissive and subordinate to men?", according to the affidavit.

In 2014, Victim 2 attended a university event as a recipient of a scholarship. She was called up to take a picture with Strampel and he reached around and grabbed her "left buttock and gripped it firmly," according to the affidavit.

Months later at a luncheon he walked up to her and slowly looked her up and down. She was uncomfortable and asked him to look at her face, and he responded, "eye candy is eye candy."

Also in 2014, he met with a female student identified as Victim 3 who had failed an exam. When she walked into his office, she later told police, he scanned her body up and down several times.

She asked permission to retake the exam and Strampel told her she could if she signed a contract saying she'd drop out if she failed.

She fell one point short of a passing grade when she retook the test, and when she met with Strampel he suggested she become a centerfold model as a backup career. He told her she could take the test a third time, but she would be required to do anything for him, and said if he called her on the weekend or to "weed the garden" she would have to do it.

She later told police she understood this to mean that she was being asked to do anything he wanted sexually in exchange for the favor.

Strampel served as dean of the College of Osteopathic Medicine from 2002 until December, when he stepped down for medical reasons. He remains on the faculty, though he is on medical leave. 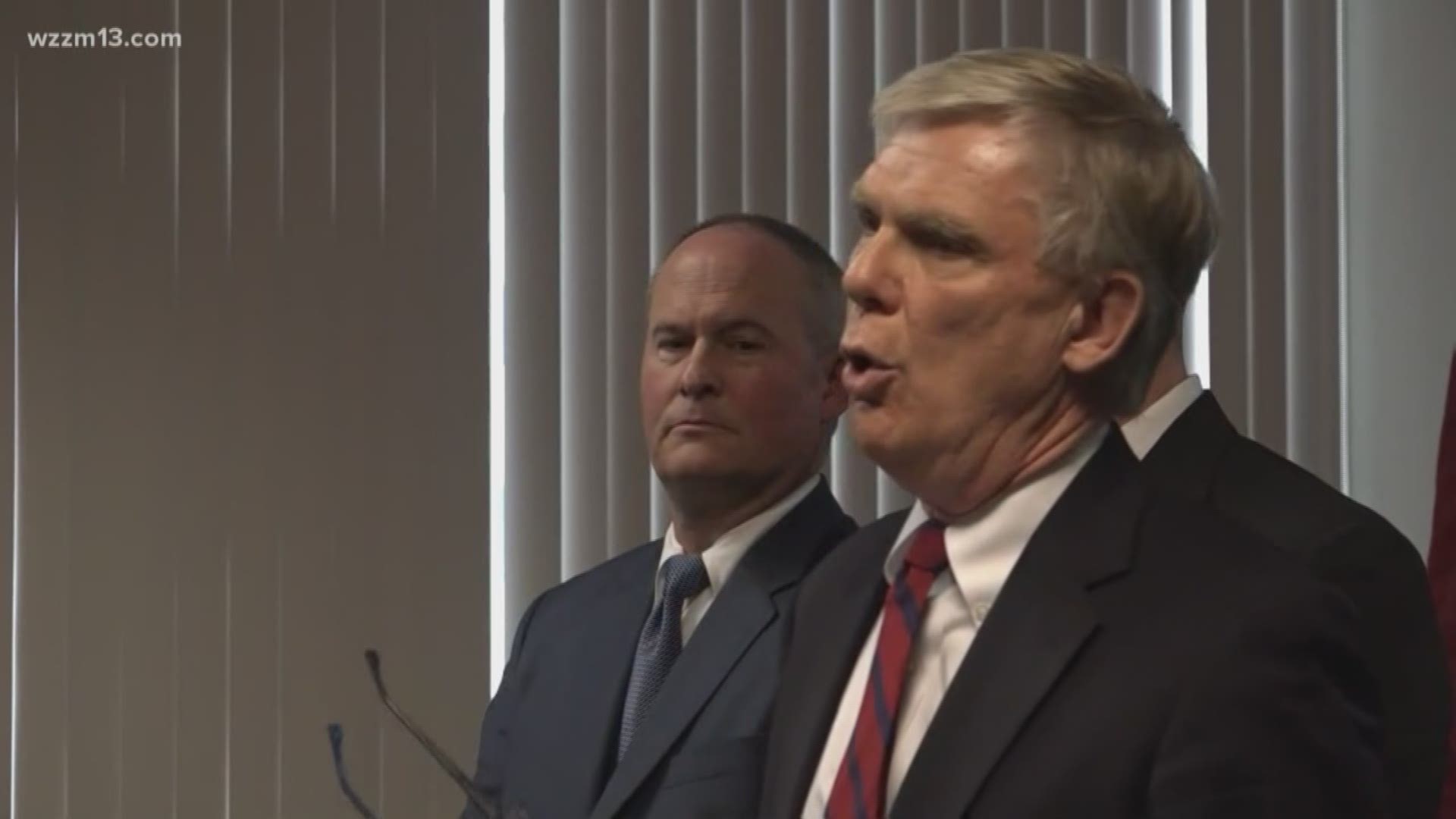 In February, interim MSU President John Engler took steps toward firing Strampel by starting the process to revoke his tenure.

"Some of the allegations about his personal conduct, especially conduct toward students, are disturbing," Engler said in a statement reacting to the charges. "Today's charges confirm our belief that he has fallen short of what is expected and required from academic leadership. They are not in alignment with this university's values and they never have been."

Jamie White, an attorney who represents more than 30 women and girls suing MSU over abuse involving Nassar, said in a statement that details connected to Strampel's charges are not surprising.

"We pleaded privately and publicly for an independent investigation in February of 2017 those requests fell on deaf ears until the entire country was exposed to this disaster through the victim impact statements of more than 250 women," he said.

"We will never know how much evidence has been lost, tampered with, and destroyed over the course of the last several years."

Strampel had been Nassar's boss for several years, including in 2014, when Nassar was the subject of a criminal investigation and a university Title IX investigation stemming from Amanda Thomashow's report that Nassar sexually assaulted her during a medical appointment.

Strampel received regular updates on the progress of the Title IX investigation and communicated directly with Nassar during it, documents show.

A month before the investigation ended, Nassar emailed Strampel and said he was going to return to clinical duties, according to emails the State Journal obtained through a public records requests. Strampel wrote back, "be sure you have someone in the room with you at all times until the report is finished."

This approval is the basis for one of the willful neglect of duty charges.

The investigation found that Thomashow, then a recent MSU graduate, likely misinterpreted what Nassar did as sexual assault because she didn't understand the "nuanced difference" between that and osteopathic medical procedures. Thomashow has asked the U.S. Department of Education to reopen that Title IX investigation.

After the investigation, Nassar and Strampel met and agreed on three protocols required for Nassar to return to clinical duties, but those protocols didn't include a mechanism to ensure compliance. Strampel later told MSU police he never intended to follow up on the protocols because they were common sense for all physicians and because Nassar had been exonerated, according to a police report the State Journal obtained through a public records request.

Strampel's handling of the protocols after the investigation is the basis for the second willful neglect of duty charge.

The criminal investigation by the MSU Police Department continued 16 months after the Title IX review concluded. During that time, MSU allowed Nassar to see patients. Ingham County prosecutors denied a warrant request for a misdemeanor sexual assault charge in that investigation.

The State Journal reported in January that the report given to Nassar and Strampel found Nassar's conduct could open the university to lawsuits and expose patients to “unnecessary trauma based on the possibility of perceived inappropriate sexual misconduct.”

In 2017, Nassar pleaded guilty to three child pornography charges prosecuted by the U.S. Attorney for the Western District of Michigan and 10 sexual assault charges that were prosecuted by the AG's Office. The MSU Police Department led the investigations. Nassar is serving a 60-year sentence in a federal prison in Arizona.

Many of the sexual assault charges related to abuses at MSU, and several for abuses that occurred after the close of the Title IX investigation.

►Make it easy to keep up to date with more stories like this. Download the WZZM 13 app now.