A UGA grad promised an incredible investment. The SEC says he ran a $269,000 Ponzi scheme.

Syed Arbab has been sued by the SEC alleging he scammed a handful of young investors and acquaintances out of thousands. 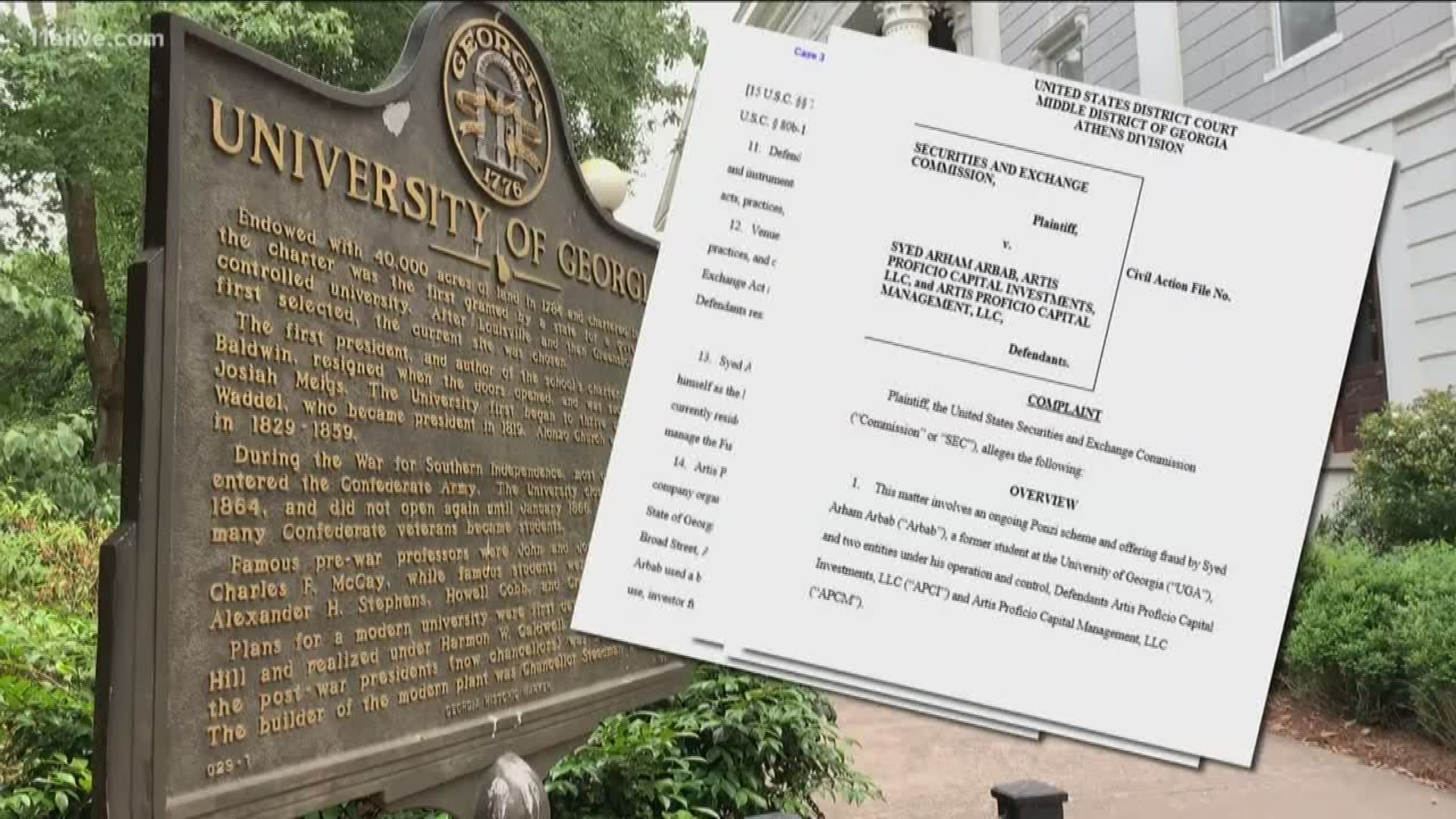 ATHENS, Ga. — Syed Arbab and Aaron Miller knew each other from their Michigan high school days, according to court documents.

Miller felt confident enough in Arbab, a recent University of Georgia graduate who told people he was pursuing a master’s in business administration, to put down a $2,500 investment in Arbab’s emergent firm, Artis Proficio Capital.

There was nothing to lose, the way Arbab sold it.

He was promising to take only 15 percent of profits made on investments using the money. There were no fees, and he would absorb all losses up to $15,000.

His firm, he told his former high school classmate, managed more than $2.2 million and had made a 22.7 percent return year over year.

Still, Miller had at least a nagging doubt.

Over the next month, Miller testified in a court declaration, he would make a series of additional investments, totaling roughly $5,000.

Now, that investment is almost surely lost as Arbab - who graduated with a degree in cellular biology and never enrolled in UGA's MBA program - faces a lawsuit from the Securities and Exchange Commission alleging he was running a frat house Ponzi scheme.

Miller is one of at least eight investors that Arbab is accused of defrauding out of almost $270,000 in just months.

RELATED: After being impaled by javelin, UGA sprinter said athletic training kicked in

Other victims allegedly included a 25-year-old pharmacist from South Carolina who was told the firm was growing by an incredible 56 percent year over year, and a 30-year-old fellow Bulldog who works in private equity in Atlanta and invested more than $100,000, only to get back about $60,000 of it.

The SEC says Arbab took investor deposits for roughly a year, beginning in May 2018, and squandered them on expensive Las Vegas gambling trips and exorbitant trading losses in excess of $300,000.

On Monday he consented to a preliminary injunction order from the SEC freezing his assets.

“We are working with the SEC to resolve the issues between us and we expect to successfully do that,” his attorney, Robert Loventhal, told 11Alive in a statement.

According to court documents, Miller was left in the dark until he heard from an  Atlanta private equity director who, like Arbab, had graduated from UGA.

The director testified in a court declaration that he made his six-figure investment with Arbab in March, with the understanding that he would get it back in two weeks with six percent interest and another $7,162 as part of a “bond agreement” with Artis Proficio.

He was planning to put the money toward buying a house and football tickets, he testified.

The two weeks came and went, though, without Arbab paying him back.

Instead, he said he started receiving transfers for varying amounts from the bank account Arbab used for Artis Proficio, as little as $100 and as large as $10,000.

Then in April, he started getting sent cash from random people on payment apps like Venmo and CashApp, in the hundreds and thousands of dollars.

The director received money from Miller, and messaged him believing he was acting on Arbab’s behalf to make the repayments.

“Hey man! Are you able to Venmo any more on behalf of Syed now? I’m still owed a lot from my investment,” he wrote, in a Venmo message screenshotted by Miller and sent to Arbab.

According to Miller’s court testimony, Arbab had told him that the pro was a manager for his firm, and he believed he was depositing his investment in the firm through the Venmo payment to the equity director.

“Whats he talking 'bout,” Miller asked Arbab separately in a text after he got the message.

“He was f****** with you lol that’s my boy,” Arbab, who had told Miller that the director was a manager for his firm, replied.

Miller and the equity director then pieced things together.

According to an SEC press release issued Monday, “no hedge fund existed, Arbab’s claimed performance returns were fictitious, and he never invested the funds as represented.”

“Arbab also allegedly used portions of new investor money to pay earlier investors who had asked for their money back, the hallmark of a Ponzi scheme,” it said. “Arbab even instructed some new investors to send their money – unwittingly – to existing investors through payment applications such as Venmo, Zelle, and Cash App, and misleadingly told them that the existing investors were either a ‘partner’ or ‘manager’ in the fund.”

Miller, according to his testimony, has never gotten back any of the $4,950 he ultimately invested with Arbab.

The last contact he said he had with his former schoolmate was in mid-May, a text “urging me to ‘get in Tesla.’”

“I have not invested again with Arbab,” he testified.