Judge Timothy Walmsley said he would "watch very carefully" the situations surrounding the case as they develop. 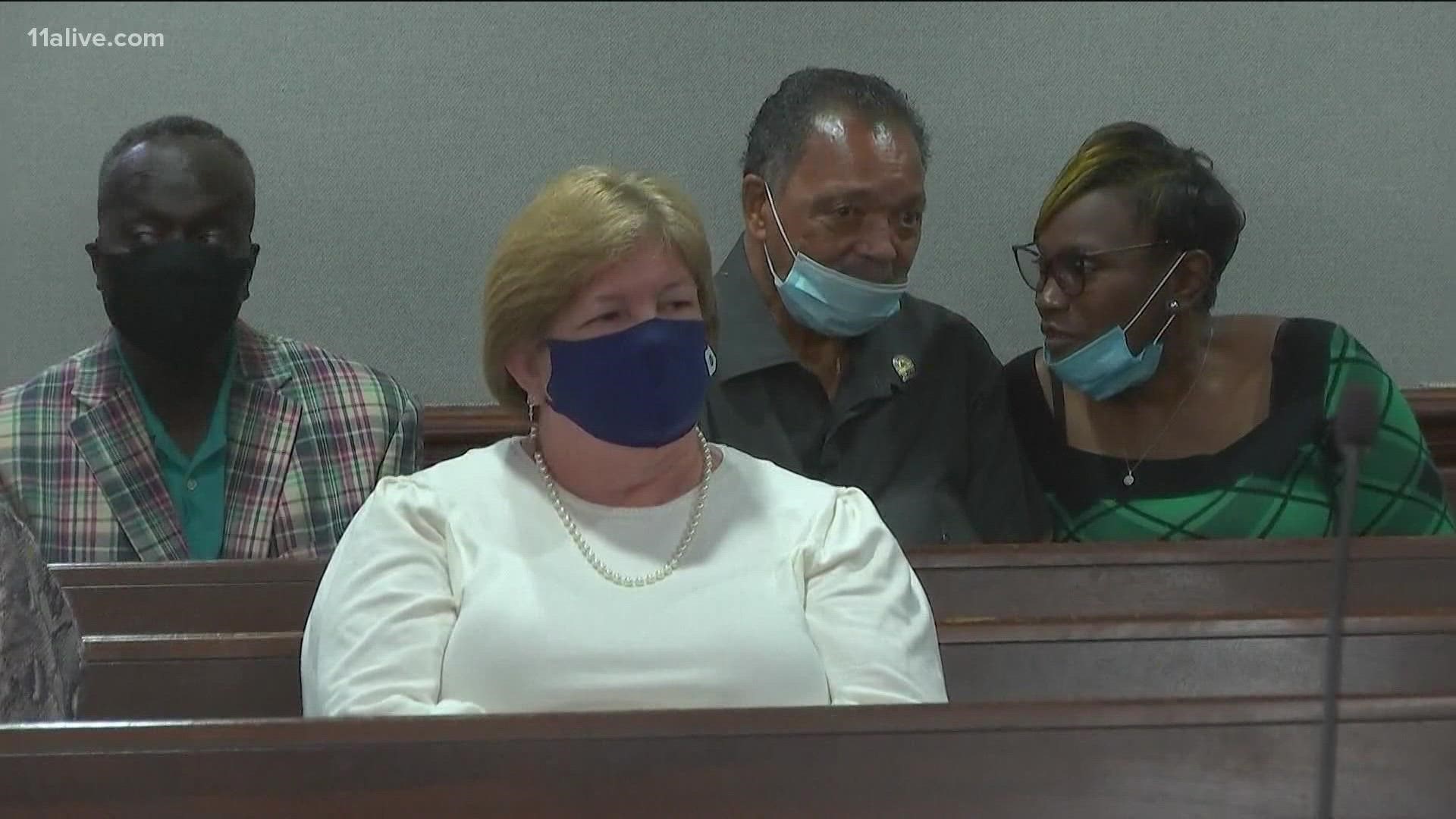 GLYNN COUNTY, Ga. — Dramatic courtroom maneuvering over the presence of Rev. Jesse Jackson and Ahmaud Arbery's mother weeping in the gallery at one point, which led to a motion for mistrial, highlighted the proceedings in the trial of Arbery's killing Monday morning.

The attorney for William "Roddie" Bryan, Kevin Gough, received several rebukes from Judge Timothy Walmsley, first, over bringing up the presence of Jackson.

Jackson came into the court with Arbery's mother, Wanda Cooper-Jones, just after the first break in proceedings.

On the return from that break, Gough brought up Jackson's presence and an exasperated Judge Walmsley said: "Mr. Gough at this point I'm not exactly sure what you're doing."

The judge said he would not remove Jackson or exclude anyone from the court unless they were causing a disruption with their behavior.

"I have already ruled on this court’s position with regard to the gallery, and with all candor, I was not even aware that Rev. Jackson was in the courtroom until you started your motion," the judge said. "I have indicated the court's position, the position hasn’t changed. At this point, it's almost as if you're trying to continue this for purposes other than just bringing it to the court's attention, and I find that objectionable."

After telling Gough his ruling was "unchanged," the attorney began to speak in response - with Judge Walmsley cutting him off.

"I'm done talking about it Mr. Gough," he said. "I'm telling you that the court's position has remained the court's position - unless anyone in the gallery is disruptive or here to cause some demonstration that would distract from the presentation of evidence in this case, this court is not going to single out any particular individual or group of individuals as not being allowed to be in this courtroom as a member of the public.

"That is consistent with my prior ruling and will remain my ruling."

Later, the issue of a mistrial was brought by Gough and the defense attorneys for Greg and Travis McMichael, the father and son who initiated the chase of Arbery on Feb. 23, 2020, with Travis ultimately shooting him dead in a struggle over his shotgun.

It came after a neighbor of the Arberys testified in court, and a picture of a young Ahmaud was shown as evidence. In that moment, Arbery's mother began weeping in the gallery.

The defense lawyers argued that the jury would have been improperly affected by the sight of the mother weeping.

"I don't think it gets any more difficult at moments like this, for family members to have to sit through the evidence," he acknowledged. "This moment feels unique, in that the one piece of evidence the state put up (the photo) was not so inflammatory, but there were several jurors who did look over - their faces changed, the emotion, the sympathy they felt. And to see then Mr. Rev. Jackson... the ultimate figure of fairness and justice and equality, to see that I don't think it gets any higher in terms of the impression that that makes."

Bryan's defense attorney received significant backlash last week for making comments about not wanting "any more Black pastors" to show up - referencing Jackson by name, and seemingly inspiring him to come to the trial on Monday in response.

"I don't mean to suggest that Al Sharpton or Jesse Jackson or any other pastor belong to a mob, but at the same time we are talking about organized behavior by whoever outside the court... community leaders are fearful the city will burn down," Gough said. "This isn't a mob case - if you testify against a gangster, they might burn your house down, might burn your business down, they won't burn your whole city down."

Judge Walmsley rejected the motion for a mistrial, and said he would "watch very carefully" the situations surrounding the case as they develop, but that it was his intention to continue to ensure the defendants receive a fair trial.

He also directed blame for much of the circumstances at Gough, saying some of the outside commotion "is directly in response to comments you made, that I find reprehensible... is something maybe has influenced what is going on right now."

"The court is faced with balancing a lot of things going on outside this courtroom," he said. "So my measured response at this point is to balance all of that out and try to move forward with the trial. I am not granting a mistrial at this point based on these arguments that are being made."

On Monday afternoon, the jury saw, for the first time, the 12-gauge Remington shotgun used to kill Arbery, and the cell phone video of Travis McMichael shooting Arbery with it.

The prosecutor asked if Kelly could see from the video if Arbery was armed.

“It doesn’t appear that there’s anything in Mr. Arbery’s hand at any point while he’s running,” Kelly said.

Next, the medical examiner will testify about the details of the autopsy and exactly how Arbery died from the gunshot wounds.

Once the prosecution rests, the defense attorneys will disclose if any of the three defendants will testify.