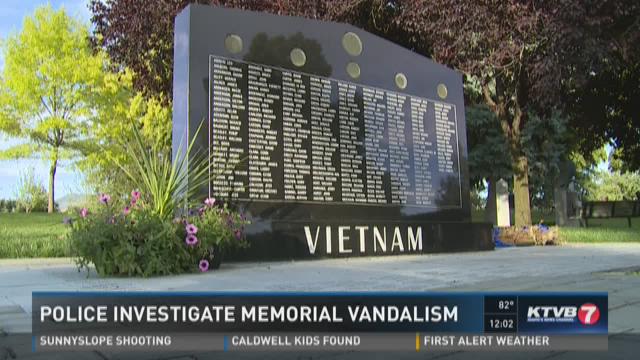 BOISE - Just weeks after it was dedicated on Memorial Day, the new Vietnam Veterans Memorial in Boise has been vandalized.

Someone pried six medallions off the face of the black granite memorial in Veterans Memorial Park.

J.D. Poss, the president of the veterans group that sponsored the memorial, said the medallions cost about $3,350 total, and each was custom made.

One medallion represent the Vietnam Veterans of America organization, while the five other medallions represented the branches of the armed forces. Poss said the larger VVA medallion took about six months to create.

"I was sick to my stomach when I saw it," Poss said. "I couldn't believe that somebody did it."

Joe Chandler, owner of Memorial Monuments, says he was shocked someone would tear anything from a memorial and that his company is already working on a replacement set.

"I haven't seen anything like this in the 40 years I've worked here," said Chandler. "We have already started working on new medallions and hope to get them installed in about two weeks."

Police were on the scene investigating Sunday evening.

Hundreds of people attended the memorial's dedication ceremony on May 30 - Memorial Day - including Maj. Gen. Gary Sayler, the commander of the Idaho National Guard.

The memorial honors Idaho's 217 fallen Vietnam veterans, and is reminiscent of the Vietnam War Memorial in Washington, D.C.