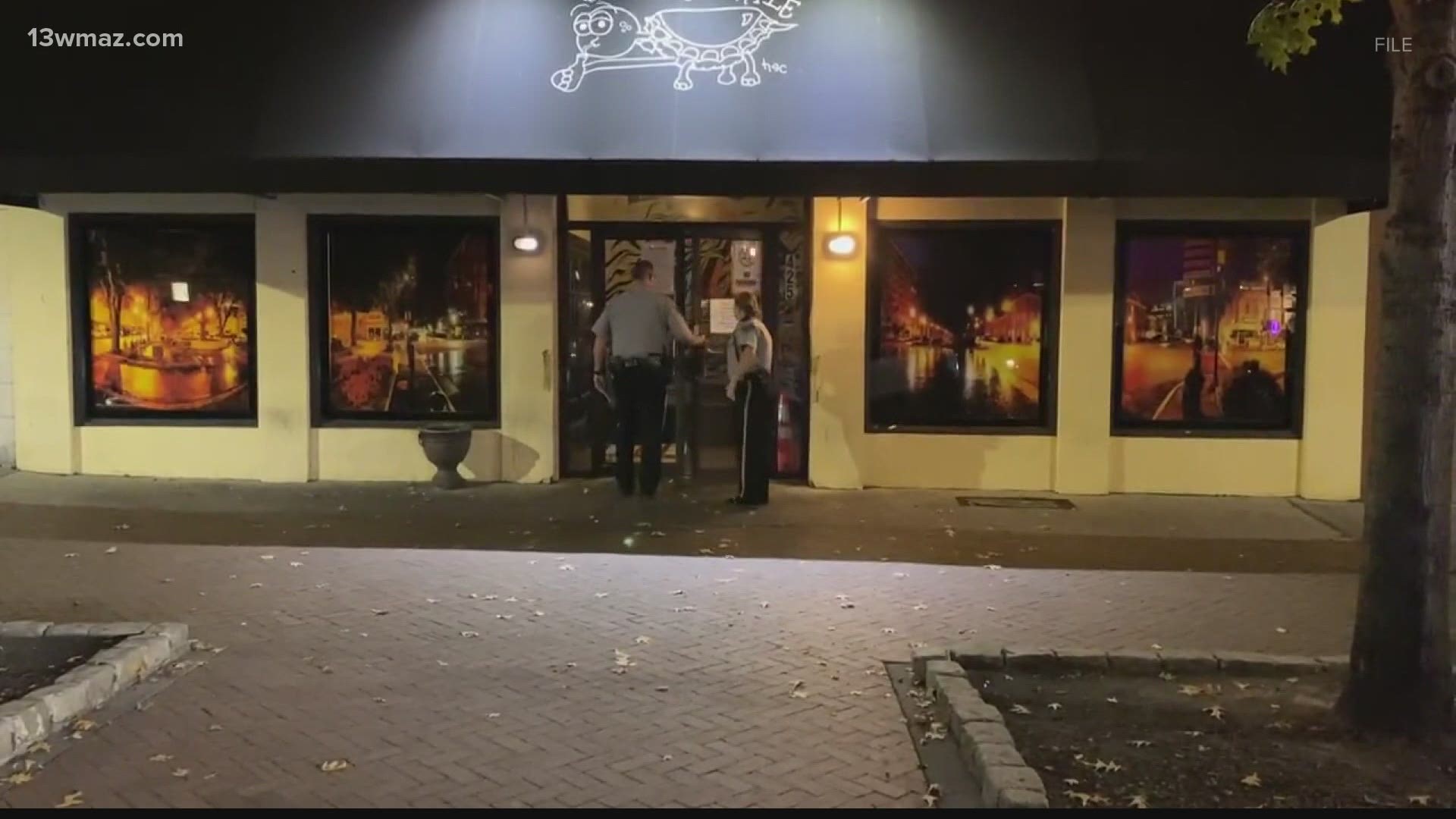 MACON, Ga. — A Macon man is charged with murder after a shooting along Cherry Street that left one dead and at least seven injured. Deputies arrested 29-year-old Durand Faulk around 3 a.m. Tuesday.

Faulk is charged with one count of murder and four counts of aggravated assault, according to the Bibb County Sheriff's Office.

With this arrest, we received more details from the sheriff’s office on what they say happened Friday morning on Cherry Street. However, Thirsty Turtle owner Tim Obelgoner and general manager Matthew Obelgoner are disputing the sheriff's office's statements about an alleged fight at their bar and where the shooting started.

According to the Bibb County Sheriff’s Office, Durand Faulk got in a fight Friday morning at a downtown bar, the Thirsty Turtle. Now, the sheriff’s office has not said whether that fight happened inside or outside the bar, but they do say Faulk was cut in the face. You can see the wound in his mugshot released Wednesday.

Investigators say Faulk then got a gun and fired into the crowd of people, hitting several people, including 22-year-old Jhacaya Mann, who later died.

Owner Tim Obelgoner and General Manager Matthew Obelgoner say the fight did not happen inside their bar.

Matthew said he was working that night and that nobody could have gotten a knife into the club.

"We had 11 people [security guards] working that night. We do thorough pat-downs -- for males, females, search all the bags. If you get caught with a weapon, you get turned away and we don’t let you back in," Matthew said, but the father and son also dispute some other statements by the sheriff’s office about where the shooting started.

"The car came out this way, hooked a left, onto oncoming traffic," the general manager said, pointing out the intersection of Cherry and Third streets next to the Telegraph building where Matthew says he saw the shooting start.

"The witnesses the victims, the evidence, all indicate everything happened at the Third and Cherry. Started there, continued down the street and we just happened to be here," Tim said.

On other hand, the Bibb Sheriff’s Office says after the fight, a person drove down Cherry Street firing into a crowd outside the Thirsty Turtle, and continued firing down at the intersection of Cherry and Third Street, a little less than 100 yards from the bar.

The Bibb County Sheriff’s Office temporarily suspended the Thirsty Turtle’s alcohol license Friday night. Sheriff David Davis says it was because their cameras in the bar were not working and that violated county rules, but the Obelgoners argue that their business is being singled out.

"There are many other businesses that were actually closer to the crime scene than the Thirsty Turtle and no action has been taken against them," Tim said.

As for the investigation, the Bibb County Sheriff’s Office says they are still interviewing people and following leads, and there may be more arrests.

The sheriff’s office says they will not release any more information until this investigation ends. Anyone with information can call the Bibb County Sheriff’s Office at 478-751-7500.