A federal judge heard arguments in court last week and handed back the decision, Tuesday. 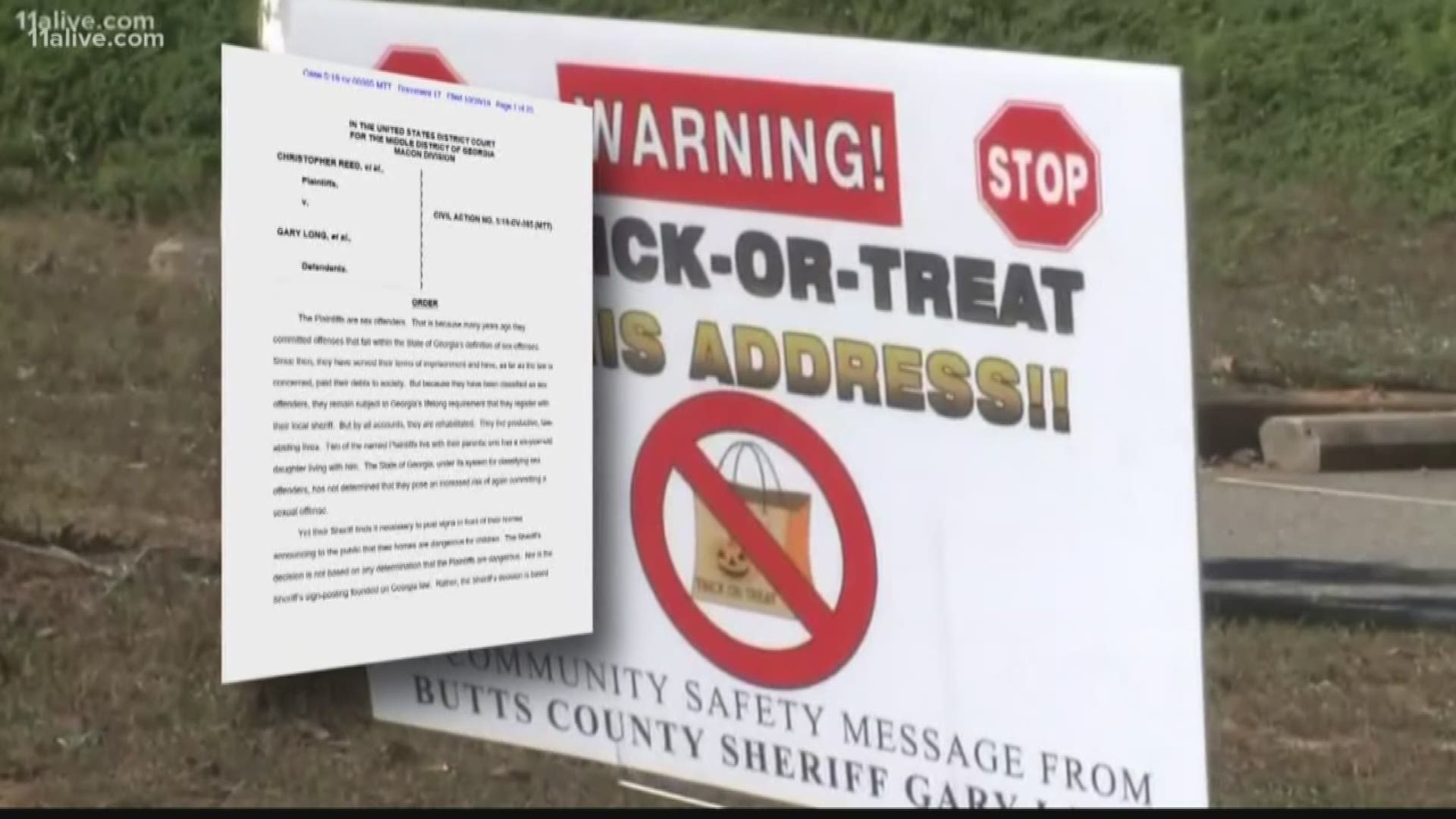 ATLANTA — A federal judge has issued a ruling favoring - in part - three registered sex offenders who sued the Butts County Sheriff, calling the "no trick-or-treat" signs the sheriff placed in their yards an abuse of power.

Last year, Butts County Sheriff Gary Long had deputies place the signs in the yards of the registered sex offenders in the days leading up to Halloween, alerting parents and trick-or-treaters that they should avoid those homes.

"My office took precautions and placed signs indicating 'No Trick-or-Treat' at each registered sex offender’s residence in the County," Sheriff Long said. "This was done to ensure the safety of our children."

Georgia state law prohibits registered sex offenders from placing Halloween decorations on their property. But several of the sex offenders objected to the signs, saying it made them a target and was an overreach by the sheriff. Three of those offenders ended up filing suit, arguing that the yard signs went too far - breaking the law in the name of enforcing the law.

“State law does require him to notify the public in very specific ways, and none of those ways includes placing signs on registrants’ lawns," explained Mark Yurachek, one of the attorneys representing the plaintiffs.

According to the lawsuit, the offenders questioned whether the sheriff "exceeded his authority" in putting up the signs and whether deputies trespassed on their properties in doing so. The suit also says the deputies' actions caused harm, including "anxiety, embarrassment and humiliation," and damaged their ability to trust law enforcement. They sought a jury trial and damages.

A federal judge heard arguments in court last week and handed back the decision, Tuesday. 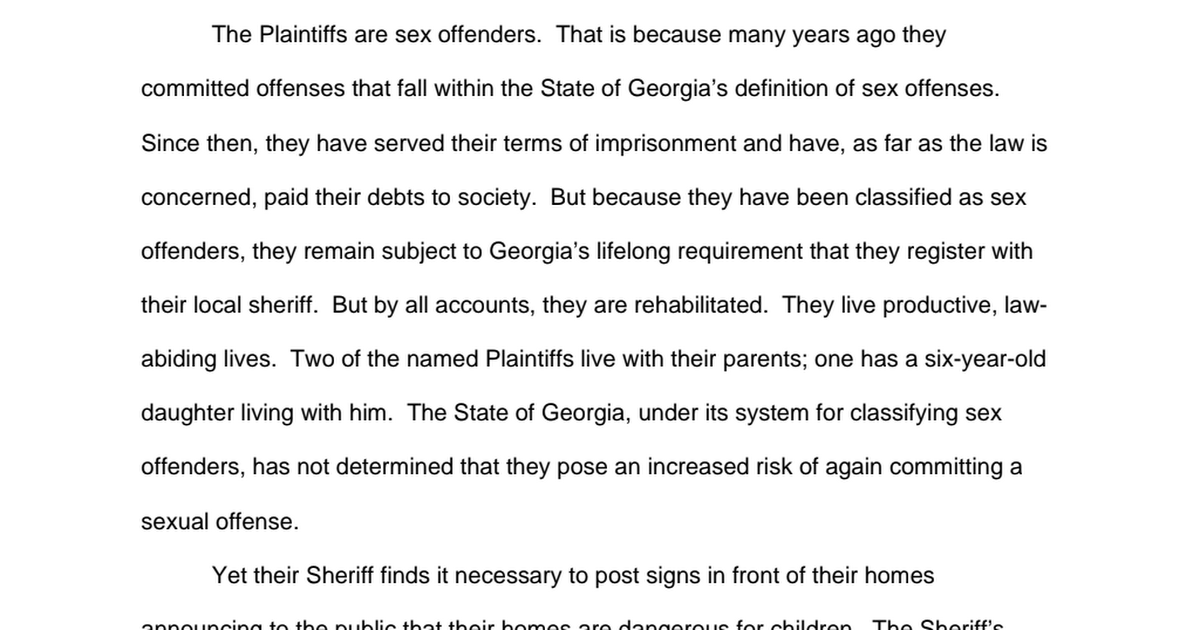 In the ruling, the judge granted the named plaintiffs' motion to prevent the sheriff's office from posting the signs in the named plaintiffs' yards. However, the judge declined to offer damages. The court also declined to enter into a sweeping injunction in favor of all registered sex offender, but warned the sheriff's office "should be aware that the authority for their blanket sign posting is dubious at best and even more dubious if posted over the objection of registrants."

The court continued, saying that the ruling does not limit the sheriff's discretion "to act on specific information suggesting a risk to public safety. But he cannot post the signs over the named Plaintiffs’ objections simply because their names are on the registry."

In a statement to 11Alive following the judge's ruling, Yurachek, the attorney, said his clients were "thankful" to the court's "thoughtful and measured decision."

"There is a long way to go in this action and, although we decline further comment specifically addressing the litigation, we are hopeful that this decision indicates that, as with this preliminary issue, we will prevail in the permanent injunction action and the lawsuit in general," the statement continued. "We hope for and wish that every child in Butts County and in every community in the country enjoys a joyful and safe Halloween and note, as the Court’s opinion did, that the lack of signs in front of registrants’ homes will not affect either their joy or their safety this year or any other year."

He added that he would hope the ruling gives the sheriff "pause about putting up signs this Halloween or in the future."

11Alive reached out the sheriff's office for a comment on the ruling. They posted a response on their Facebook page saying they will continue to fight the lawsuit, but will not put up any yard signs while the suit is pending.

"The judge in this matter has ruled that I can NOT put signs on the right-of-way of the three offenders that filed the lawsuit. While I respectfully and strongly disagree with the judge’s ruling, I must abide by the ruling," the sheriff said.

The sheriff added that he sought advice from the Prosecuting Attorneys Council in 2018 before deputies placed the signs, who gave specific instructions on how to place them in compliance with Georgia Law.

In lieu of the signs, the sheriff said he will keep a "very strong presence" in the neighborhoods where there are known sex offenders. He also added that while some may be disappointed with the ruling, he strongly encouraged they "NOT take matters into your own hands this Halloween."

"We understand frustration with the Judge’s ruling, but we all must abide by it unless it is overturned on appeal. Unfortunately, there is no time to appeal before this Halloween," the sheriff said. "My promise to the citizens of Butts County is to protect the public, especially the children."

You can check the Georgia sex offender registry by visiting the state's website.