What does that mean for insurance claims? 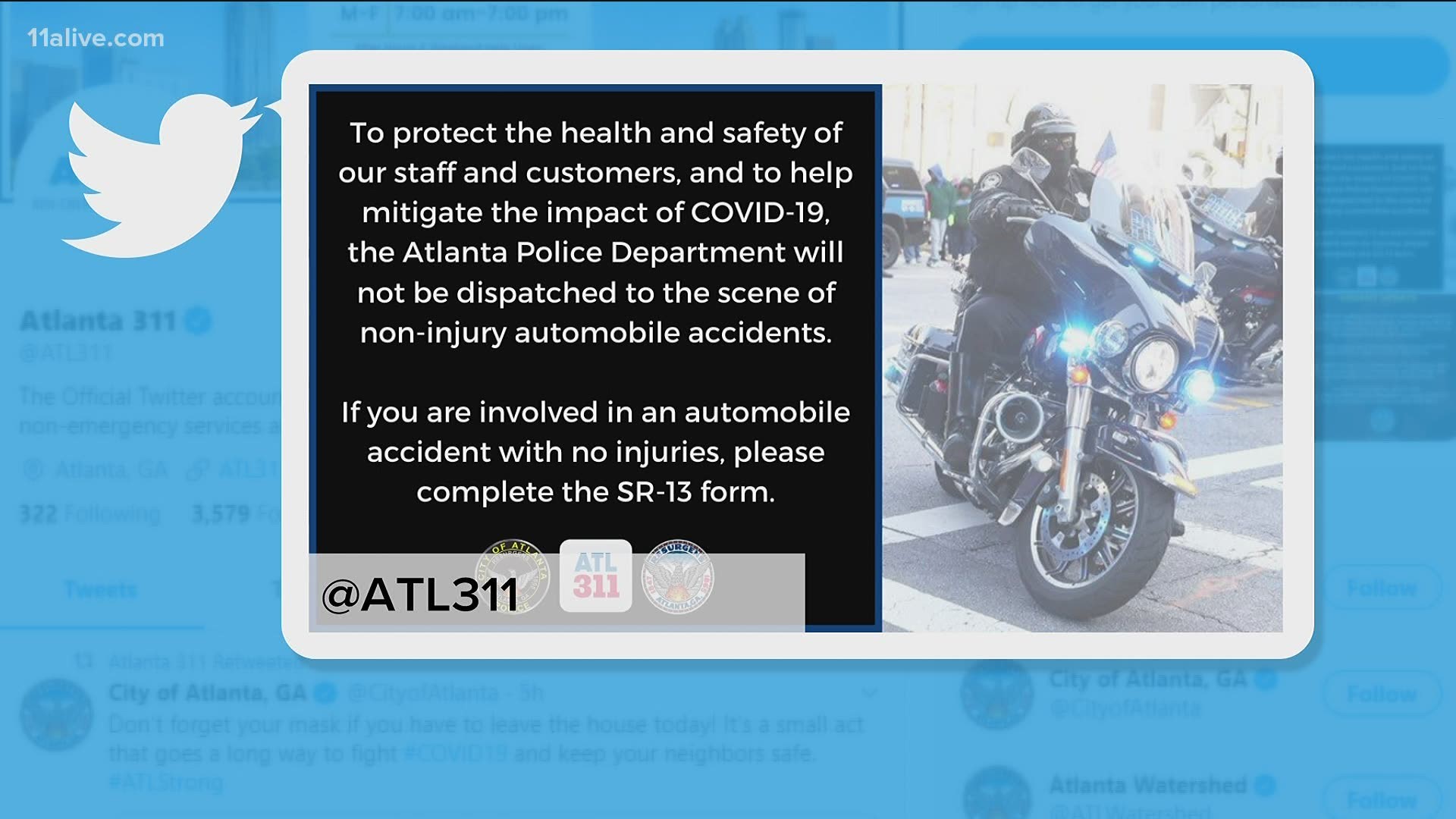 ATLANTA — As daily life continues to change during the pandemic, here's another twist that turns an already bad situation into a far reaching financial and legal problem.

The Atlanta Police Department has suspended the response to non-injury crashes as a result of following social distancing guidelines due to COVID-19.

"Whether on public roads or private property Atlanta Police Officers will not be responding to vehicular accidents where there are no reported injuries and all vehicles are drivable," the department said in a release to 11Alive.

► READ | List of steps for drivers in crash, at bottom of this story

They say the procedure for drivers after a crash, is to move to the side of the road, exchange information with the other driver, take photos, and fill out a SR-13 form.

But is the form enough for insurance purposes?

Local insurance agent and member of Independent Insurance Agents of Georgia (IIAG), Andy Siegel points out those self-documented forms really aren't the same as an actual police report and could cause some problems.

Insurance companies use the police report as official documentation to decide liability and fault.

"The he said she said is cleared up by witnesses, as well as the police report as far as which lane someone might have been in, what color the traffic light was," explained Siegel.

Even if you aren't in a crash personally, a lack of police reports can still hurt financially, according to Siegel.

"The way insurance companies set their rates is based on levels of risk -- if they know that the accidents in certain territories, geographic regions aren't being managed that well, they might tend to charge higher rates for people who live in those areas," said Siegel.

Atlanta is known for it's traffic and statistically has been rated one of the highest for vehicle crashes in the nation.

Atlanta Police say they average about 1,080 crashes each month, with more than 100 involving serious injuries.

"While it is difficult to break down the remaining 980 monthly accidents to determine the number involving minor injuries, it is safe to say we respond to a significant number of fender bender accidents each month where no injuries have occurred," said Atlanta Police Public Information Officer John Chafee.

.@Atlanta_Police will not be dispatched to the scene of non-injury automobile accidents. If you are in an accident with no injuries, complete the SR-13 form found here: https://t.co/FS8X1rpXAd pic.twitter.com/oGvIsCwL9F

The department says they will still respond to hit-and-run accidents, injury crashes where safety is a concern, including when the vehicle is creating a "dangerous traffic hazard" to others.

When asked about drunk driving crashes, Atlanta Police do say they will respond to "incidents involving criminal activity."

You can still call and request an officer, and one "may" respond to a non-injury crash, but their procedure, as of March, is to not respond. But that's not a guarantee.

"It's tricky because you wanna be safe, you don't wanna get COVID, the police are stretched thin as it is," said Siegel.

The department says if you have drivers have a question about insurance claims or legal procedures "they should speak to their insurance agent or an attorney for professional advice."

Atlanta Police say you should do the following after getting in a fender bender in the city limits:

Healthcare workers from 59 counties send Gov. Kemp a letter. Here's what it said