Georgia is missing a large portion of data for positive COVID cases including location, age, race and ethnicity. 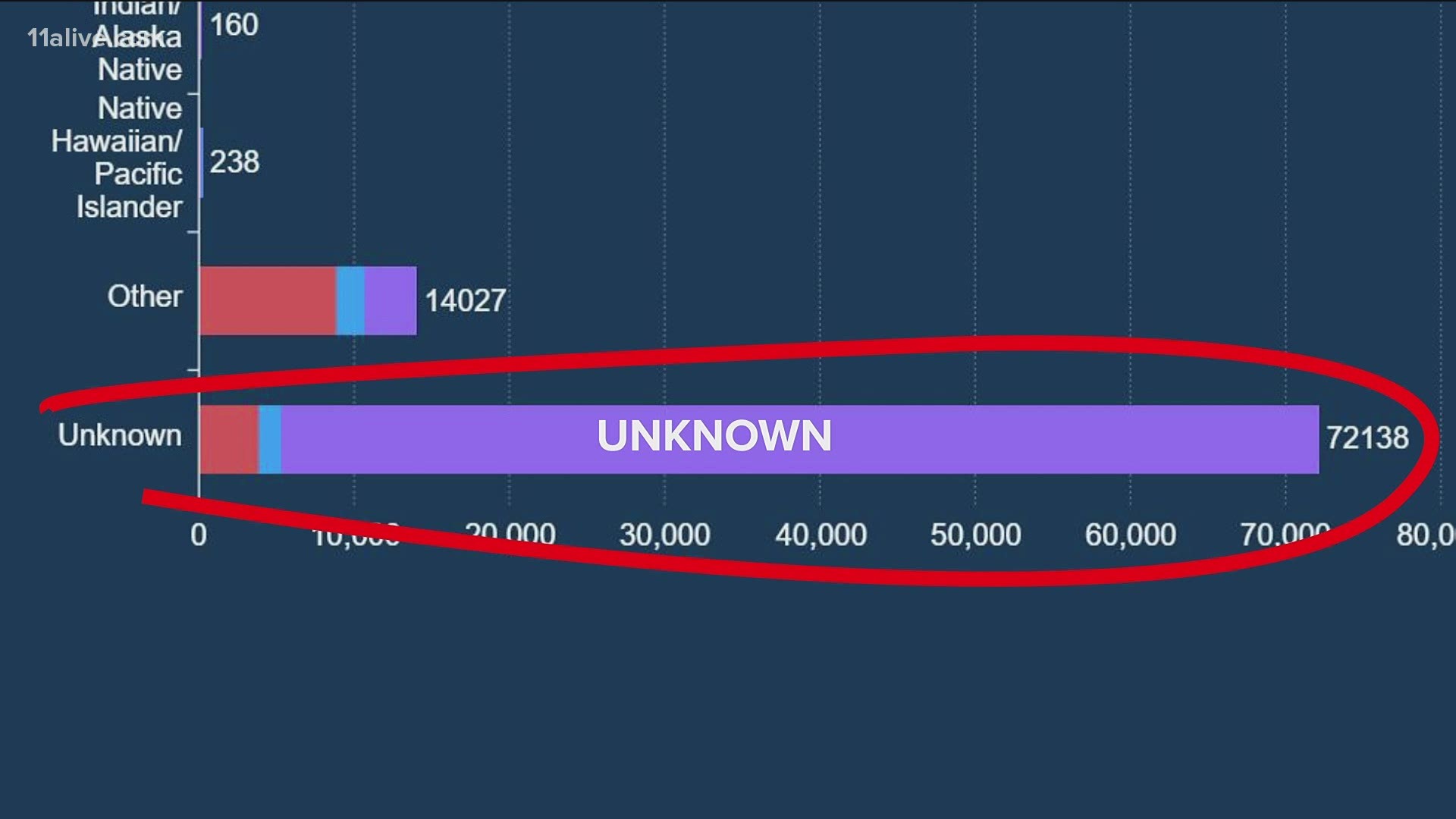 ATLANTA — Many of the decisions surrounding whether to open schools or businesses rely on COVID data. It’s also a key factor in where to put testing sites and how to staff hospitals.

Behind each data point there’s a name. Someone recovering from COVID, or a loved one lost. But there’s one data point that has no face.

“As we’ve had an increased number of tests coming in, rather than knowing more about each case, we’re knowing less,” says Dr. Harry Heiman, an associate professor at Georgia State’s School of Public Health.

Dr. Heiman has been concerned about what is referred to as "the unknowns," ever since they started appearing in our data. He’s not talking about the things we don’t know about COVID. Heiman is referring to the data that is missing information. Those cases get lumped together, because we simply don’t know where else to put them.

Four months into the virus’ reach in Georgia and of the confirmed cases, we have no idea where 2,549 of the people behind those positive test results live. That makes it more difficult to track hot spots. It’s a similar problem for age, where on Tuesday 2,020 cases were labelled unknown. That data point is becoming increasingly important as we look to track COVID’s spread in schools.

Heiman’s biggest concern, is the biggest unknown category on the state and most counties’ reports, race and ethnicity. The Department of Public Health (DPH) says it has no information on either for 37-percent, or 72,138 of our confirmed COVID cases.

“I think we don’t know the data because we’ve never put in place the systems to ensure that we collect the data," said Heiman.

Dekalb’s Public Health Director, Dr. Elizabeth Ford agrees that in the effort to improve testing access, communities neglected to ask all the questions we wish we had answers to.

“We were not consistently collecting racial and ethnic data up until about April, May,” said Ford.

The sicker someone gets,  the more we do know. Hospitals are able to survey the patient or family members to fill in some of those blanks. But the idea is to stop cases before they ever reach the emergency room doors.

If we had all of the information, public health officials agree, the data charts would magnify the real toll of this virus on Black and Hispanic people.

“There are a certain number of people who just don’t, don’t answer or they think it’s too complicated. They’ll say well my father’s Hispanic, my mother’s Black,” pointed out Fulton’s Public Health Director, Dr. Lynn Paxton.

RELATED: New signs that hospitals outside Atlanta are under strain to keep up with COVID-19 hospitalizations

Fulton County has the highest number of cases in the state. Despite the county’s 19 page report, which breaks down everything from zip codes to hospitalization, one third of its data related to race is still missing.

Missing race data leads to gaps in understanding the virus. That's why public health officials are trying to shift strategies, to make sure every case counts.

“So that we know where to target our intervention,” said Ford. “We’re working on some telehealth options to make sure that even if you can’t get to a doctor, maybe we can get to you,” Paxton added, discussing ways the county is trying to address health disparities in the long-run.

While counties may now be asking for this information, Heiman says not all private labs are onboard.

“What we need right now is leadership from our state commissioner at the Department of Public Health to say, this is critical data that we need collected and reported on each and every patient," said Heiman.

Southwest to no longer disinfect seat belts, armrests before every flight

China, WHO in talks on plans to trace coronavirus origin