'I hate the mornings when I have to wake up': Mom describes long-term health effects of COVID-19

Some studies estimate 10 percent of those who contract COVID will have lingering side effects. That’s 2.7 million people in the US alone, and counting. 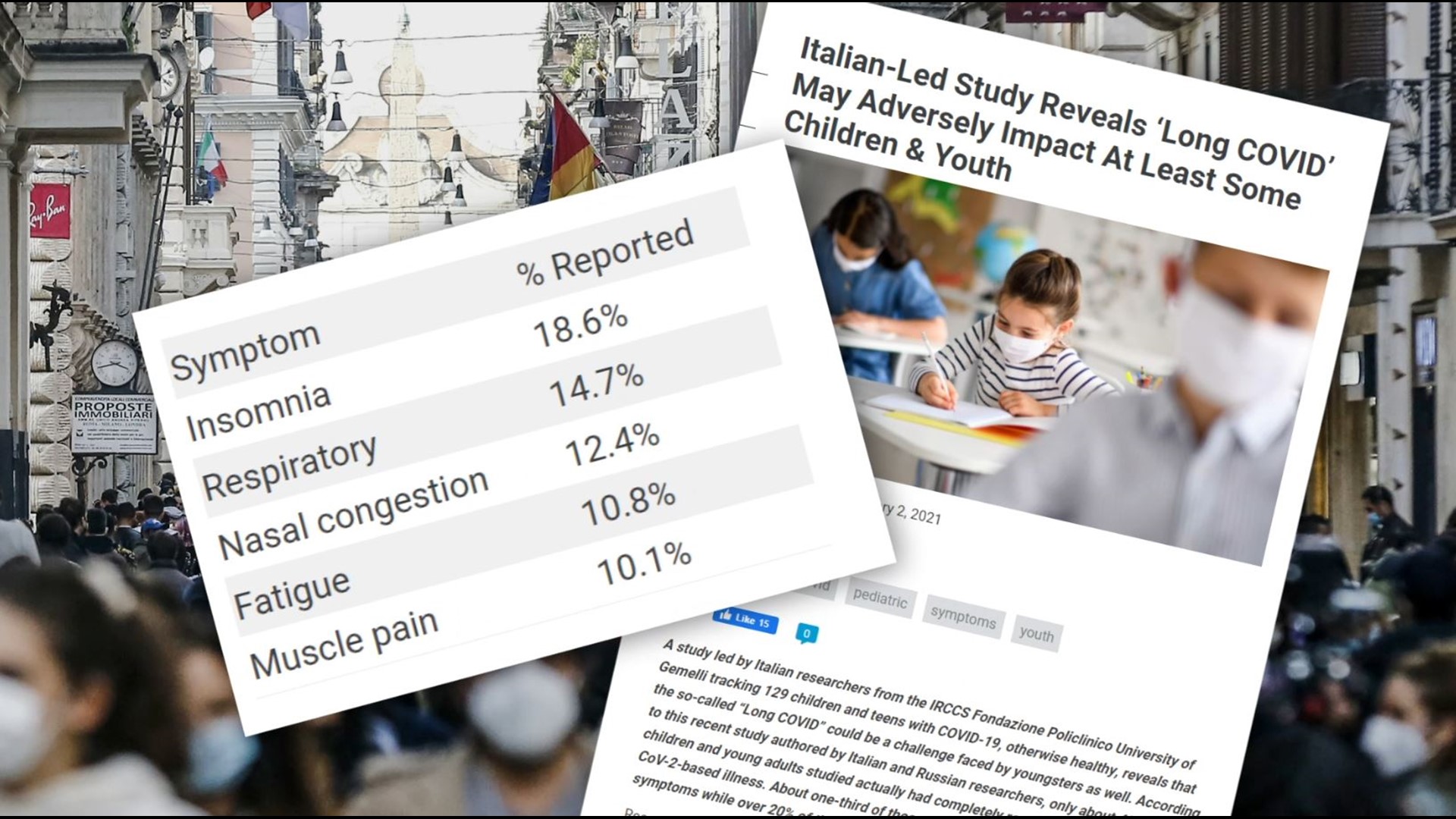 ATLANTA — With so many people speaking out about the long-term health effects of COVID-19, one woman is disheartened the medical community and insurance companies have done so little to figure out how to treat the next phase in recovery.

Caroline Wallis tested positive for COVID-19 last March. She remembers feeling so tired and restricted in her breathing, she actually wrote two letters, one for each of her sons. The letters were her final words, should she die.

“Because I didn't know if I was going to make it through the day or not. And so it's been scary,” Wallis said, still emotional at the thought.

That was 11 months ago. Wallis still has those letters because even though she’s technically COVID free, she still struggles to breathe and stay focused. Once an avid runner, it is an effort to walk up a hill.

“I don't know if I'm going to get any better. I look forward to nighttime when I can sleep. And I hate the mornings when I have to wake up because you're in pain and that's no way to live,” Wallis said.

Wallis is the Executive Director of FAITH, a domestic violence, sexual assault, and child advocacy center in Rabun County. She has had to lean on her co-workers to get the job done. Her husband has had to pick up the slack at home.

Wallis said she has spent thousands of dollars on tests and treatments that insurance wouldn’t cover. Her medical chart shows that she’s fine. At least one doctor told her it was all in her head.

“One puts me on this medicine, the other one puts me on another medicine. And I feel like I'm a pharmaceutical at the end of the day. And yet nothing's really helping. So I don't know. I'm lost," Wallis said.

Pulmonologist Jermaine Jackson sees that desperation every day. Studies affirm the problem. Seventy percent of patients in a Chinese study continued to have at least one COVID-related symptom six months later. An Italian study found a similar trend in children.

RELATED: Allergies or COVID-19? Immunologist breaks down the different symptoms

“One of the things I like to stress to the patients and reassure them that what they're experiencing is real,” Jackson explained.

While the illness is not made up in someone’s head, the impacts of COVID-19 can be mental. Post-traumatic stress disorder, anxiety, and depression are real physiological problems that can be caused by the virus.

Dr. Jackson is helping to create Piedmont Healthcare’s COVID Recovery Clinic. He admits, figuring out how to treat the ongoing symptoms is trial and error.

“We're building the plane as we fly it. With each passing day, we learn more and more," Jackson said.

The doctor stresses that Piedmont’s program is not a study, but they are trying to collect information in a way that they can look back on it to find trends and better ways to treat the fatigue, brain fog, and breathing problems that so often plague people months later.

Long haulers are often young, perfectly healthy and physically fit. Many were never admitted to the ICU for COVID-19, let alone intubated.

“It's important that we don't allow them to just fall by the wayside, that we treat it like a chronic disease process,” Jackson explained.

He said Piedmont has received calls from across Georgia and even outside of it, people all hoping the clinic can help. Long haulers say what they need is a doctor or case manager that can help coordinate one plan of care from neurology to physical therapy and explain to insurance providers why they should pay for it. It's unlikely even Piedmont will be able to offer that.

RELATED: A mom had concerns about the COVID vaccines. She spoke to the experts herself, and here's what she found.

Emory and Wellstar Health Systems said they too have or are in the process of creating post-COVID care units. Redmond Regional in Floyd County and Augusta Medical have created outpatient rehab programs for the physical impacts, but most hospitals are still leaving it to individual doctors to figure out.

“My hope is, is that we can provide a way and be pioneers for a lot of those programs that are out there looking to start up,” Jackson said.

However, that help won’t come soon enough for Wallis. Last fall, she called around to several hospitals that had created long COVID programs, but none would take patients from out of state.

After learning this winter about the program at Piedmont, she called for an appointment, but canceled a few days later.

In an email she said, “I have given up hope…and am trying to learn to live and work full-time in a new way. I just can’t keep up the fight and cost of it," Wallis said.

Diana Berrent has her own COVID-19 story and long-term health impacts. After months of treatment at Mt. Sinai and plenty of home remedy efforts, she said she’s feeling 95 percent back to herself.

But some impacts, like COVID onset glaucoma, will continue to impact some of the things she loves, like photography.

“We are tracking infections, we are tracking hospitalizations and we are tracking mortality. And so with that comes the assumption that everybody who has survived has recovered. And unfortunately, that is far from the truth,” said Berrent.

“We are mobilizing an army of survivors to donate their plasma and to support science in every way possible… because so many of the answers to the mysteries of this virus lie in the bodies of survivors," Berrent said.

But Survivor Corps now has a second - unofficial purpose. A support group. Berrent says those stories represent the largest data set on non-hospitalized patients in the world.

“We have created a community of 150,000 strangers who are helping each other, who are there for one another in the middle of the night and answering each other's questions when doctors don't have answers.”

Berrent said, whatever the tool, the medical community needs to pay more attention to the needs.

“They did not receive anti-coagulant, interferons, antiviral steroids, et cetera, and so they are having a very different disease trajectory,” Berrent explained.

Short-term memory loss, brain fog, and fatigue are the most common, certainly for Wallis who instead of celebrating as her sons graduated from high school and college this spring, laid miserable in bed.

“I have been an absent parent during some pretty cool times,” she said in a tired and now raspy voice. “Those letters will stay on my computer until I get better."