'It really is a miracle': Former teacher survives double-lung transplant that came after COVID-19

COVID nearly killed him, but a former teacher has a new lease on life. 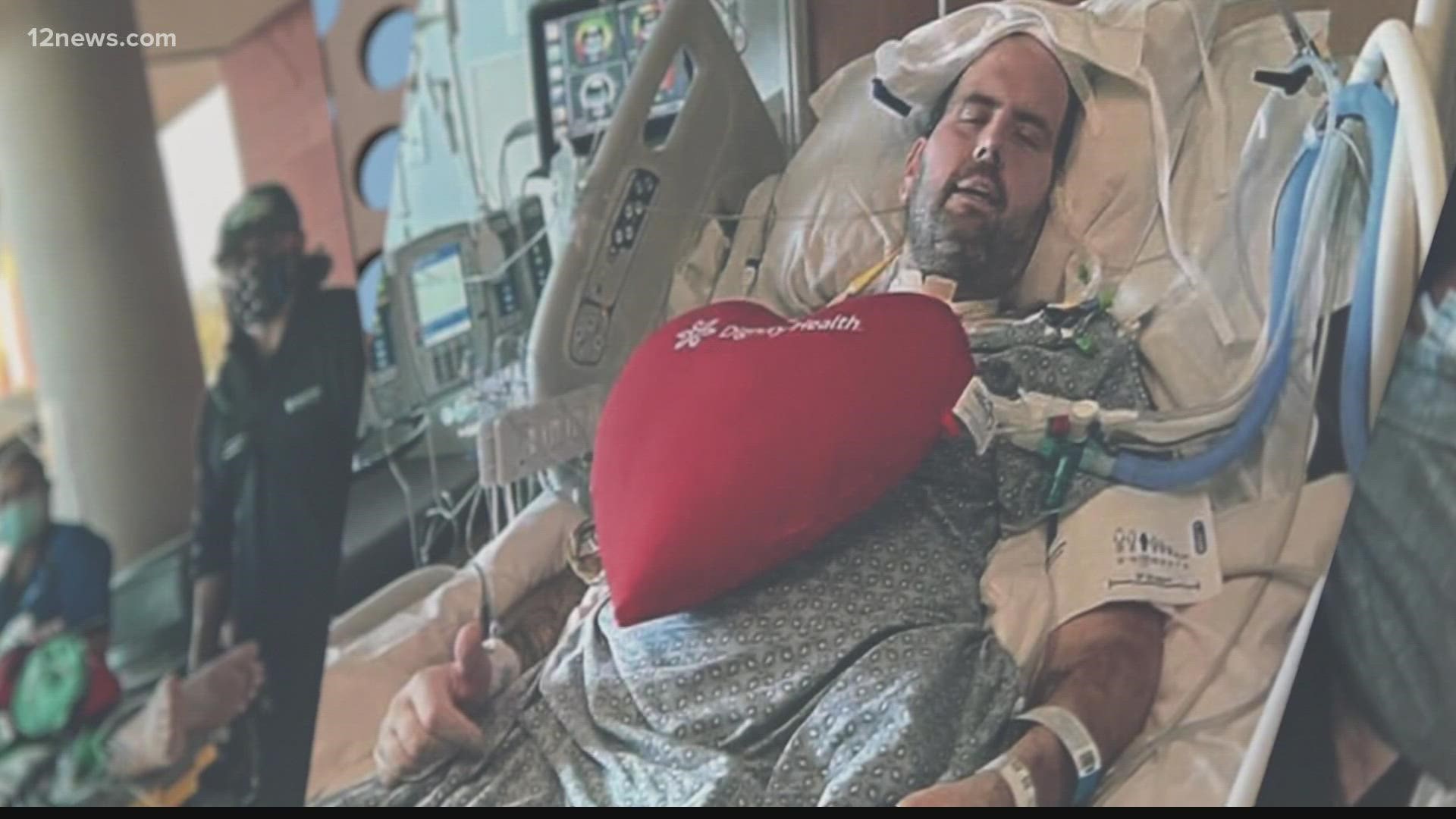 PHOENIX — The Horbaczewski family had never been one to take it slow. Their social media pages are filled with pictures of hikes, races and other outings, showing off their jam-packed schedule.

So, when Monique Horbaczewski dropped her husband Bob off at the emergency room in December and watched him walk through the hospital doors, she never expected what would be coming next.

"The last person I ever thought this would happen to is my husband, Bob. He is an ox," she told 12 News earlier this year.

Monique, Bob and their three kids all contracted COVID-19 in early December 2020. Everyone recovered except Bob, which prompted that ER visit on December 17, 2020.

His worsening condition surprised his family, as he'd recently been a teacher and coach with Dysart Unified School District in Surprise. He worked out all the time and had no underlying conditions.

"Looking back, part of me still just feels so numb," Monique shared in September.

RELATED: Respiratory illnesses on the rise in children, and not just COVID-19

Bob was admitted to the ICU and later moved to Scottsdale Shea Medical Center, to have access to an ECMO machine. He was intubated on Christmas Day in 2020.

At first, Monique says he showed signs of improvement but then quickly took a turn for the worst. He'd be teetering on the verge of death for months, and Monique and his family had to watch it all unfold over Facetime, with the hospital rules forbidding them access inside.

On multiple occasions, Monique thought she was going to lose him.

As Bob's stay in the hospital grew longer, Monique worked hard to manage everything on the outside, including taking care of three kids and their home.

"My mind, my body was in survival mode," she explained.

"I realize that there are several instances that my husband should have died," Monique said.

RELATED: Yes, the delta variant can be detected through genomic sequencing, but that's not the test you get at a clinic

But Bob had other plans.

After a lot of ups and downs, his damaged lungs were stable enough to try for a double-lung transplant, the only way doctors thought he'd have a shot at surviving.

"It is just mind-numbingly difficult when you’re in that hospital bed," Bob recalled. "And you’re just locked in, in that prison of your own body."

He was moved to St. Joseph's Hospital and Medical Center in Phoenix on March 2 and went under the knife just a week later on March 9 after the hospital got an organ donation.

The team at St. Joe's says they’ve done 11 double lung transplants for COVID-19 patients to date. The procedure is risky and it’s not easy to retrieve healthy lungs, with only about 15 to 20% of donors being lung donors, according to Dr. Rajat Walia, who was part of Bob's care team.

"Organ shortage is a big problem nationwide," Dr. Walia explained. "A lot of patients don’t make it off the waitlist."

Monique and Bob said their donor remained anonymous, but they're forever grateful for this person's generosity.

"Somebody was amazing enough to donate their lungs and give me a second chance at life," Bob said.  "And it's just it's amazing every day to think about that, to realize that somebody else gave of themselves so that I would have an opportunity to live."

RELATED: Arizona poised to be in 'better position' with COVID-19 in near future, expert says

Each breath with Bob’s new body is a gasp filled with gratitude, but it hasn't been an easy road.

In the weeks following the surgery, it was tough for Bob to adjust to his new body.

"I lost 90 pounds from when I first came to the hospital to post-transplant," he shared. "I could barely lift my arms or move my legs."

Then a few weeks after that, he was transferred to rehab to try and rebuild his strength.

"Relearning how to walk, how to move, how to swallow," he explained.

Monique was his biggest cheerleader as he worked toward recovery.

"I remember coming into the rehab after watching Bob just struggle to breathe," she said. "And I was amazed. What a small thing to take a breath, but what a huge, huge milestone for him not to suffer."

Bob's progress was also met with the stark reality.

Not everyone is as lucky. Bob and Monique explained that dozens of families have reached out asking for help or tips on how to advocate for the same kind of treatment for their loved one battling COVID-19.

Hearing the other stories that mirror her own family is heartbreaking.

Monique detailed that three different people all reached out to her and lost loved ones just in the past week.

"Sometimes there's that survivor guilt that like, why, why do we get a second chance?

RELATED: Can kids get ‘long COVID' after coronavirus infections?

On April 28, Bob was finally discharged from inpatient care and was strong enough to go home - where he hadn't been since mid-December.

It was a dream come true, especially for his youngest daughter.

"I don’t think there was one minute or one second where she wasn’t just talking to me in the backseat the whole way home," he said.

But those sweet moments were met with more immense difficulty.

"Our family will never be what it was before we got COVID, ever," Monique said.

The family that was once busy with school, schedules and sports is still adapting at home as Bob adapts to the new lungs.

There are more appointments, more surgeries and more limits.

But they've learned to not take the little things for granted.  The couple was able to drop their eldest daughter off at GCU for college earlier this summer. Bob's son is in high school and his youngest daughter just started first grade.  Monique marveled that he's regained enough strength back to pick his little one up.

"It's just all these different moments," Bob said. "Being able to be here makes that struggle worthwhile."

"And I have to remind him you are never my burden," Monique shared.  "You are my miracle."

Subscribe to the 12 News YouTube channel to receive notifications on the latest videos about the latest information on the coronavirus.