South Carolina has seen a dramatic spike in cases over the last several weeks. 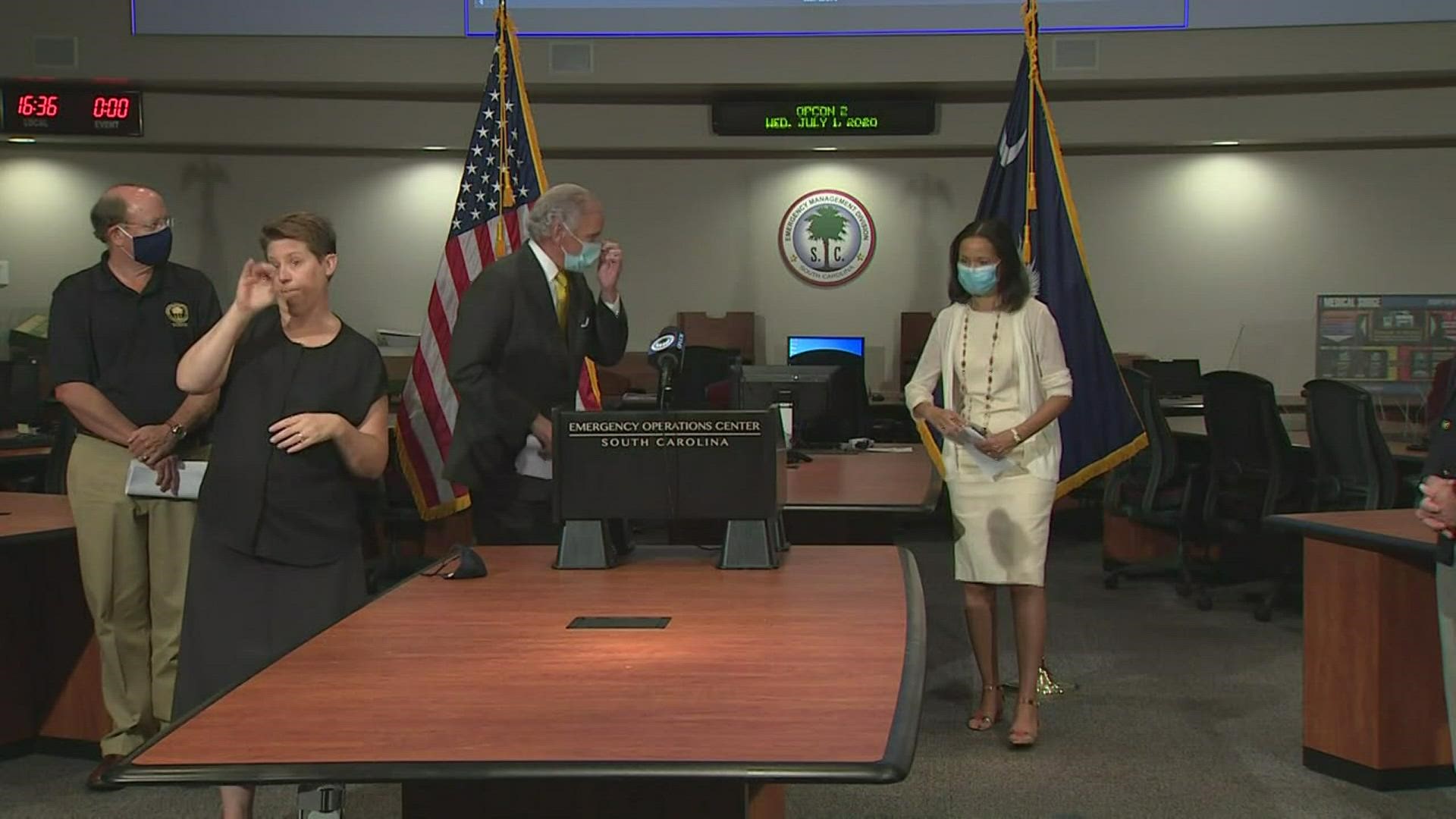 COLUMBIA, S.C. — South Carolina Gov. Henry McMaster said now is the time for the public to make up their mind if they're going to take action to stop the virus spread as the state's health agency said numbers could soon spike to previously unseen levels.

McMaster spoke alongside health officials on the same day the state set the one day record for deaths in a day with 24.

Over the last 10 days, the state has seen multiple days with over 1,000 cases, including 1,497 on Wednesday. The state also saw 1,160 hospitalizations, a record for the pandemic so far.

"Unless we do something dramatically different, we will look at projections far worse that what we are seeing now," said. Dr. Linda Bell, the state epidemiologist. "We must do better to get these escalating numbers under control."

Bell said she's especially worried with the upcoming July 4 weekend, since the current spike began in the days following the Memorial Day weekend in late May.

"We could see cases levels that none of us could have previously imagined," she said. "This is a public health crisis...if we don't take action now, we are going to see more of our friends, community members hospitalized and die."

McMaster echoed those concerns,  saying not only will be a toll on life, but also lifestyle, saying many fall traditions may not happen if things don't change. That includes college and high school football. Right now, those events, as well as nightclubs, still aren't permitted under the governor's executive order.

"This is what's in the balance," McMaster said. "We won't life restrictions if these numbers continue to rise and the dangers persist. I can't do it. I won't do it."

McMaster said people who try to violate that order for large events could be exposing themselves to lawsuits by people if they get sick.

"I wouldn't want to be the one trying to explain to a jury why I did that sort of thing," McMaster said.

Still, Dr. Bell offered some hope when asked if the curve can be reversed.

"We absolutely could turn this curve around, if we had universal use of masks, if businesses limited the number of patrons," she said.

State health officials have said while some of the rise can be attributed to increased testing, much of the gain seen since early June is due to community spread. Young people are the biggest reason for the jump, with the majority of new cases being people under the age of 30. But many of their symptoms appears to be mild.

McMaster has said that a statewide mask rule would be impractical but did not oppose local jurisdictions passing their own version of the rule, and has strongly encouraged mask wearing. Multiple cities in the Midlands have passed mask requirements, and more continue to do so each day.

On a conference call with reporters Wednesday, Prisma Health, South Carolina's largest medical group, said while it has seen a doubling of COVID-19 patients in recent weeks, its well equipped to handle the surge. They add that they have seen a decrease in elderly patients, who make up most of the deaths seen so far from the virus.