Over the weekend the Georgia Dept. of Public Health began releasing data highlighting the counties with the most cases per 100,000 peoplre 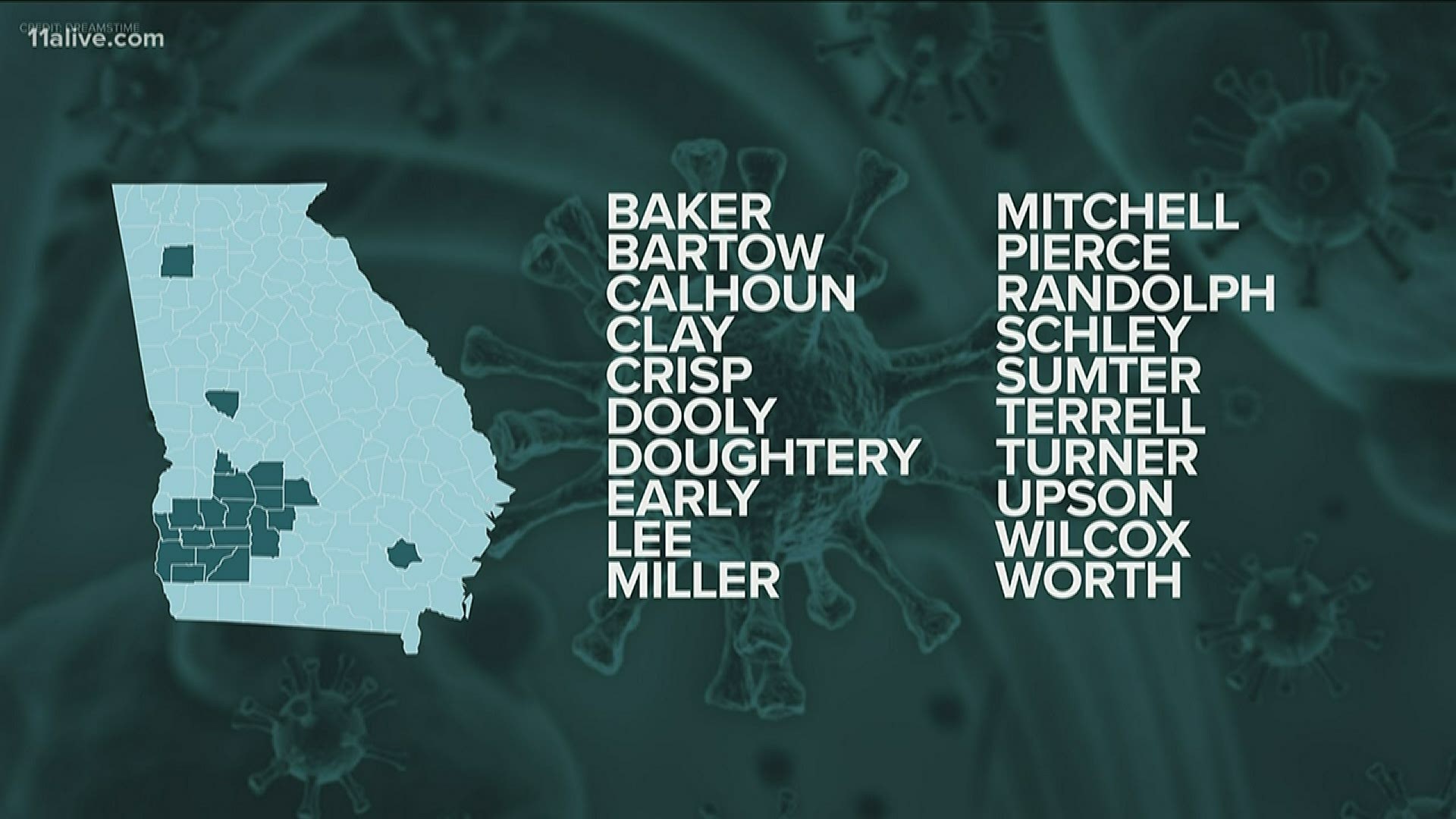 ATLANTA — For weeks, Dougherty County has been discussed in national news headlines as a hot spot for COVID-19.

NBC Nightly News, The New York Times, Los Angeles Times and other large publications have featured the county in news stories and articles looking at parts of the country hit the hardest by the deadly virus.

Despite only having a population of around 77,000 people, the county has the second-largest number of confirmed cases in the state with 1,217 and the largest number of deaths (77) related to COVID-19 in Georgia, as of noon Monday.

At Phoebe Putney Memorial Hospital in Albany, for weeks the cases and deaths increased almost daily.

"That number no longer appears to be increasing at this point and does appear to be flattening to some extent," Kitchen said. "This is not the time to let the foot off the gas. No time for complacency."

In newly released data from the Georgia Department of Public Health, several other rural counties have now being grouped with Doughtery County as having the highest rates for COVID-19 cases per 100,000 people.

Out of the top 20 counties in the state, the vast majority are in southwest Georgia. All of the counties in question have anywhere from 200 to around 1,700 cases per 100,000 people.

Credit: WXIA
Top 20 Georgia counties with highest confirmed COVID-19 case rates per 100,000 people, based on data from the Georgia Dept. of Public Health.

Doughtery, Early, Randolph and Terrell counties all have rates of more than 1,000 cases per 100,000 people. The counties named greatly outpace Fulton County.

In the Atlanta metro area, the state's largest county accounts for 1,598 confirmed COVID-19 cases, the most in Georgia. But Fulton County has a rate of only 147 cases per 100,000 people.

The 20 counties with the highest rates of confirmed COVID-19 cases, also account for more than a third of the state's deaths connected to the virus.

"You know that we are the hot spot," said State Rep. Gerald Greene, while describing some people in his district.

Greene, a Republican from Cuthbert, represents parts of Early, Clay, Randolph, Calhoun and Terrell counties -- each on the list of the top 20 counties.

"We've never lived through something like this. They're thinking it doesn't happen to me," Greene said on Monday, describing the attitude of some people in his district over the past several weeks.

Greene said that over the past few weeks he continued to hear of people attending funerals while disregarding social distancing or not limiting the number of people in attendance to fewer than ten.

Around towns in his district, Greene said he would see teens in groups and not social distancing.

He said he had recently heard of a business holding a grand opening ceremony and drawing a crowd. Greene said the business didn't notify local law enforcement or the area chamber of commerce about the ceremony.

Greene said all of the above happened despite local and county leaders putting out information about the virus and the need for social distancing. He added at the same time he added law enforcement has been very present in communities.

"In nursing homes, we've seen a tremendous volume of the virus and deaths," he said.

Lately, though, Greene believes attitudes are starting to change. He is beginning to see fewer people in public and at grocery stores, for example, he is seeing both the staff and customers wearing masks.

"Maybe the message is getting out. The tragedy of all this is making people realize that it can happen to me," Greene said.

President Trump says he has no plans to fire Anthony Fauci

With so many in lockdown and on social media, more suspect 'games' are floating around