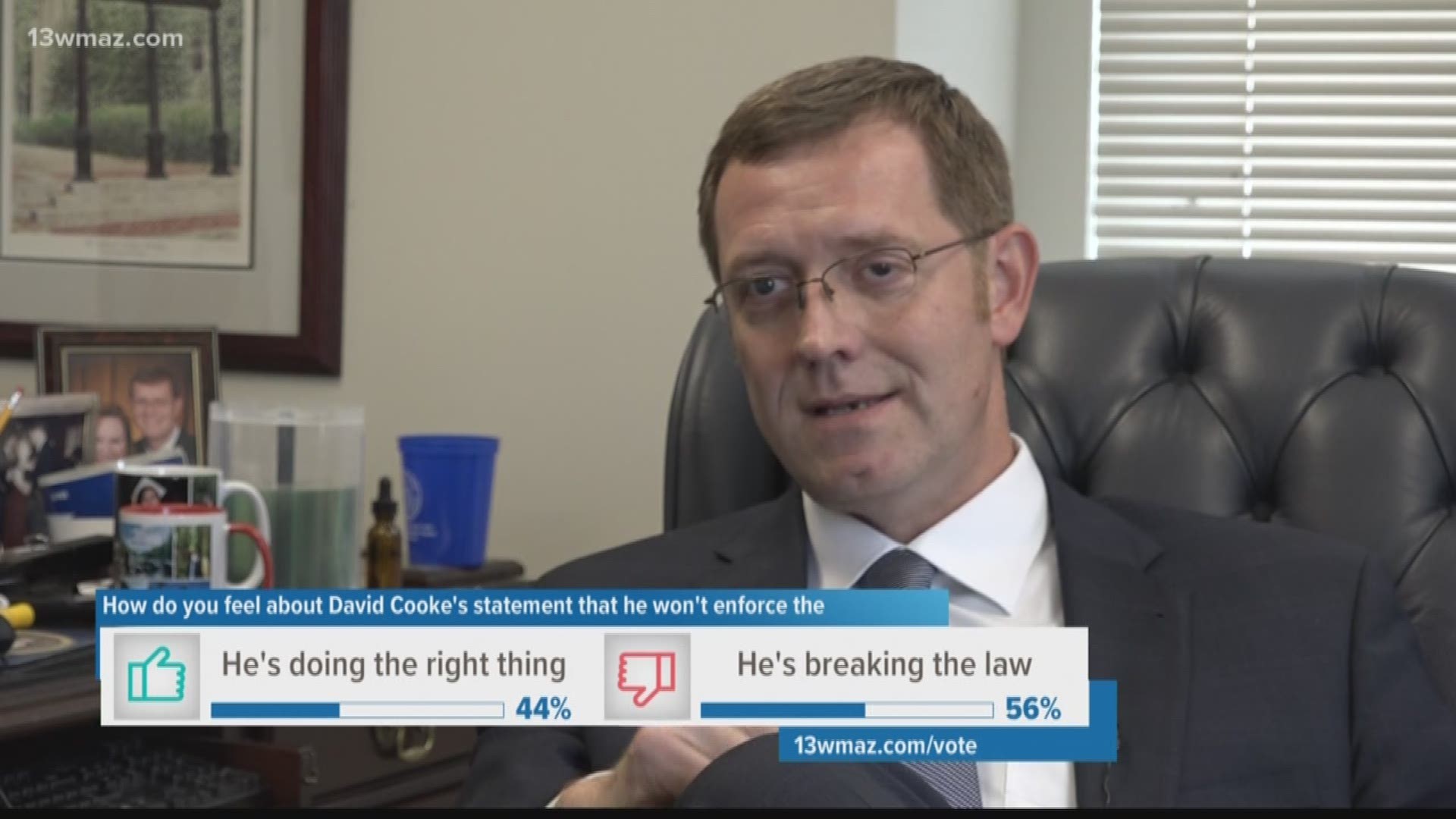 Amid Tuesday's announcement from Macon Judicial Circuit District Attorney David Cooke that he would not prosecute women seeking abortions under the bill, many 13WMAZ viewers asked about the thoughts of their judicial circuit's district attorney.

We've compiled all the statements we received yesterday and today from the area's district attorneys.

Houston Judicial Circuit District Attorney George Hartwig sent a statement to 13WMAZ that says, "My duty is to enforce the laws of the State of Georgia. It would be inappropriate to say that I would not enforce a law (or entire class of laws) enacted by the Legislature and signed into law by the Governor. Cases are always fact specific, and no two are the same. As with all other criminal cases, each case referred to the Houston DA's office charging a violation of this new law will be individually reviewed for prosecutorial merit."

Macon Judicial Circuit District Attorney David Cooke sent a statement to 13WMAZ that says, “As District Attorney, I swore an oath to uphold the constitution and I intend to honor my oath. My office will continue its long-standing practice of supporting and protecting women who are in crisis, rather than prosecuting them. I will exercise my discretion not to prosecute women and doctors for exercising their constitutional rights. It’s unfortunate that this law may turn a miscarriage into a crime scene and I will not allow that to happen on my watch.”

Oconee Judicial Circuit District Attorney Tim Vaughn sent a statement to 13WMAZ that says, "It would be premature for me to make any pronouncements in regard to this statute. I am sure the Appellate courts will have a lot to say about this statute before any of us are required to make charging decisions. At that time, I will do my best to apply the facts presented to me with law as it has been interpreted at that time."

Ocmulgee Judicial Circuit District Attorney Stephen Bradley sent a statement to 13WMAZ that says, "Neither the District Attorney nor any other citizen, can or should ignore a law. However, it would be irresponsible to speculate about a case that has not yet appeared. To my knowledge, there are no facilities in our circuit providing abortion services. In my twenty-five (25) years as a prosecutor I have not seen a case requiring prosecution under this new law. Nonetheless, as with all matters, if a case is presented to our office we will look at it carefully in light of the law and the facts as they appear at that time."

Towaliga Judicial Circuit District Attorney Jonathan Adams sent a statement to 13WMAZ that says, "My job as District Attorney is to uphold the laws of our state and to provide justice for our community. I support the efforts of our Governor and our legislature to protect lives in Georgia. Every criminal case we receive is different and every case will be reviewed on its own merits for prosecution. I do believe there are situations where our office would pursue cases against criminal abortion. The LIFE Act does not target mothers who get abortions under any condition and it also does not target anyone providing abortions in cases of rape, incest or medical emergencies. The new bill, along with the existing code, punishes those individuals administering the abortion. Our office will continue to enforce laws and protect our victims and our community."

Governor Brian Kemp signed the bill into law on May 7, officially banning abortions once a fetal heartbeat can be detected effective Jan. 2020. That's as early as six weeks, before many women know they're pregnant.

HB 481 makes exceptions in the case of rape and incest — if the woman files a police report first — and to save the life of the mother. It also would allow for abortions when a fetus is determined not to be viable because of serious medical issues.

Kemp said he was signing the bill "to ensure that all Georgians have the opportunity to live, grow, learn and prosper in our great state." He also emphasized that, "Georgia is a state that values life."

The bill is expected to lead to a lengthy and costly court battle over its constitutionality.

RELATED: Film studios after abortion bill: Don’t give your business to Georgia