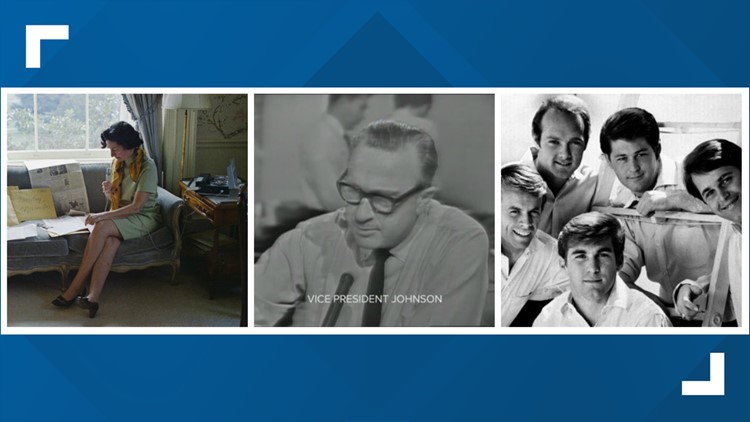 Nov. 22, 1963: The Kennedy Assassination through the eyes of the vice president's wife, a renowned anchorman, rock legends

DALLAS, Texas — Since the invention of mass media, every American generation has had a singular event, most often a tragedy, that every person remembers where they were when they heard the news.

These events changed the course of history and the country’s attitude. The assassination of Abraham Lincoln was a last sobering shot to end the Civil War and marked the beginning of a contentious Reconstruction Period. Pearl Harbor marked the beginning of the U.S. involvement in World War II, and the first steps toward becoming a superpower. The September 11 attacks made American fear a new enemy that seemed poised to attack the country wherever whenever.

However, there are few events comparable to the effect on popular culture and the country’s attitude as the tragedy that took place in Dealy Plaza.

In November of 1963, the attitude of America continued the optimism it had carried since the end of the Second World War. The first of the Baby Boomers were coming of age. Rock and roll was the new sound of America, “Lawrence of Arabia” won Best Picture at the 35th Academy Awards, Sandy Koufax and the Los Angeles Dodgers swept the Yankees in the World Series and NASA received the first space crafts that would be used for Project Gemini.

President John Fitzgerald Kennedy, an Irish Catholic World War II veteran from Massachusetts, would embody that spirit of optimism. Though not the youngest president in history, his good looks and charm seemed to exude the qualities of optimistic youth. He hosted the biggest celebrities, his First Lady Jacqueline was a fashion icon, he preached a future where Americans would walk on the moon and even vowed to work toward worldwide nuclear disarmament.

On Friday, November 22, 1963, Lady Bird Johnson was with her husband Vice President Lyndon B Johnson and the Kennedys as they toured the Johnsons home state of Texas. In New York, legendary CBS news anchor Walter Cronkite was in the CBS newsroom preparing for that evening’s broadcast. Brian Wilson and Mike Love of the Beach Boys rehearsed for a show in Marysville in northern California.

President Kennedy decided to take a trip to Texas to smooth over issues with the conservative wing of the Democratic Party in the South, less than a year before the 1964 election. On November 21, the President and First Lady departed on Air Force One to San Antonio, where they were welcomed by Vice President Johnson, his wife Lady Bird and Governor John Connally.  The group made their way to Brooks Air Force base to the dedication to the Aerospace Medical Health Center, then to Houston to meet with Latin American citizens and finally to Fort Worth.

Lady Bird, along with her husband and the Kennedys, woke up to a light rain moving through the area. President Kennedy briefly spoke to a crowd of people that had gathered outside the Texas Hotel before hosting a breakfast with the Fort Worth Chamber of Commerce.

Later that morning, the President, Lady Bird and their respective spouses boarded a plane from Carswell Air Force Base for a brief flight to Dallas Love Field, where they would drive to a luncheon at the Trade Mart.

With the rain now past, President Kennedy, the First Lady, Gov. John Connally and his wife would ride in an open car to greet the throngs of people lined along the 10-mile route. Lyndon and Lady Bird would be in the car directly behind them with Senator Ralph Yarborough.

“The streets were lined with people – lots and lots of people,” Lady Bird remembered. “The children were all smiling, placards, confetti, people waving from windows. One last happy moment I had was looking up and see Mary Griffith leaning out of a window waving at me.”

The motorcade made a sharp turn and headed down a hill in Dealy Plaza. Before the motorcade could reach the railroad overpass, a shot rang out.

“It seemed to me to come from the right above my shoulder from a building,” Lady Bird said. “There had been such a gala air that I thought it must be firecrackers or some sort of celebration. Then in the lead car, the Secret Service men were suddenly down.”

Lady Bird remembered someone in the car jumped over Vice President Johnson to shield him from the bullets. Meanwhile, Lady Bird and the Senator ducked their heads.

“The car accelerated terrifically fast – faster and faster. Then suddenly, they put on the brakes,” Lady Bird recalled. “I looked up and saw it said ‘Hospital.’ Only then, did I believe this might be what it was. Yarborough kept on saying in an excited voice, ‘Have they shot the President?’ I said something like, ‘No, it can’t be.’”

On CBS, the soap opera ‘As the World Turns’ was airing. The news team was preparing for coverage of several members of the Cabinet’s trip to Tokyo.

Then, a report came into the CBS Newsroom from a UPI teletype, “Three shots were fired at President Kennedy’s motorcade in Downtown Dallas.” It later said, “Kenney serious wounded […] perhaps fatally by assassin[‘]s bullet.” Ed Bliss shouted the shocking report across the newsroom, taking everyone by surprise.

Anchorman Walter Cronkite quickly rushed to a radio booth, as the CBS cameras were not in place yet for the CBS Evening News broadcast. Ten minutes into ‘As the World Turns,’ a bulletin appeared on television screens across the country. The voice of Walter Cronkite read:

The bulletin signed off back to the soap opera as the newsroom worked to pass along any details of the drama unfolding 1,500 miles away in Dallas. There seemed to be a sense of chaos both in Washington, with much of the government absent from the capital, and in the newsroom, where every member of the CBS newsroom attempted to gather all the information they could find.

Cronkite remembered it took only 15 minutes for cameras to show him in the newsroom passing along information and interviewing reporters who were on the scene.

“This is Walter Cronkite in our newsroom; and there has been an attempt, as perhaps you know now, on the life of President Kennedy. He was wounded in an automobile driving from Dallas Airport into downtown Dallas, along with Gov. Connally of Texas. They've been taken to Parkland Hospital there, where their condition is as yet unknown.”

By 2 p.m. E.T., 1 p.m. in Dallas, the president had been pronounced dead. However, the CBS newsroom received several different reports. Cronkite decided to address the rumors but ensured the public they had not confirmed whether the president was dead.

“There is the report in Dallas that the president is dead, but that has not been confirmed by any other source. And as late as 15 minutes ago, it was reported by aides outside in the corridor that he was still alive. The extent of his injuries is not known, either.”

Ten minutes later, Kennedy’s Assistant Press Secretary Malcolm Kilduff confirmed the news. Cronkite would say years later he would struggle to maintain his trademark composure as he prepared to tell the nation that President Kennedy was dead.

Once the announcement had been made, the focus of CBS shifted to President Johnson, who was already getting onto a plane with Mrs. Kennedy back to Washington. However, this was not known to Cronkite and the CBS news team in New York.

“It seems to me on this news desk, [we] have had no word from Dallas at all as to the location of Mr. Johnson, nor as to whether or not he has indeed taken the oath of office. It is assumed that he would have from a Dallas judge; a federal judge perhaps.”

Johnson indeed took the Oath of Office about 90 minutes after President Kennedy was pronounced dead. It would be another 90 minutes before Cronkite addressed the nation telling Americans from coast to coast there was a new President of the United States.

“We just got the word that Lyndon B. Johnson has been sworn in as the president of the United States. He was sworn in at 1:38 Central Standard Time. That was 2:38; and that's almost an hour and a half ago now, if this time is correct here. The oath was administered to him by U.S. District Judge Sarah T. Hughes.”

That night, the Beach Boys, coming off the release of their third album ‘Little Deuce Coupe,’ were preparing for a concert in Marysville, California. As the nation reacted to Kennedy’s death, the Beach Boys, along with their manager Murry Wilson and young concert promoter Fred Vail, debated whether the band would do the show.

“Local ticket outlets were already doing a brisk business in sales as all the schools had been let out early. Everyone agreed: we could 'go on with the show,’” Vail remembered years later. “It was not that they did not respect President Kennedy, nor the tragedy that had befallen our nation, it was that they were kids, it was the weekend, they'd waited a month the see their favorite 'surfing band' and that was - at that moment in time - their priority.”

The band flew to Sacramento then drove into Marysville, about an hour away. The concert would be held at Marysville Auditorium at 9:30 p.m. P.T., 11:30 C.T., eight and half hours after Kennedy was pronounced dead in Dallas, 1,700 miles away.

After a local band, Freddy and the Statics, finished an opening set, Fred Vail took the stage to introduce the Beach Boys. Though nervous, he asked the crowd of most junior high and high school students, to observe a moment of silence out of respect for the fallen president. Vail said he remembered the audience, who would be expected to scream at a deafening noise during the show, was completely silent. After a signal from lead singer Mike Love, Vail introduced the band and the Beach Boys took the stage.

He remembered the show broke attendance records without incident.

That night, Beach Boys frontman, lead songwriter, arranger, producer and falsetto Brian Wilson sat down with Mike Love, his cousin and frequent lyrical collaborator, in the Sacramento hotel room. Wilson and Love continued work on a song began that morning. The song took on a melancholy tone, one of loss and the search for comfort, as the two poured out their emotions into the tune. Wilson remember the experience of writing the song as “spiritual.”

The result was the song The Warmth of the Sun, considered as one of the Beach Boys finest performances before their mid-60s peak. The haunting melody, beautiful harmonies, and yearning lyrics that captured the feelings of a nation in mourning and one hoping to find comfort.

Little did the Beach Boys know the optimism their music captured before Nov. 22, 1963 would slowly fade. Like America, Brian Wilson and Mike Love had to grasp that the simpler times had past and the complexity of the 1960’s were just beginning.