An island without power: Why a massive Entergy transmission tower crumbled and all 8 sources of outside power were lost

Hurricane Ida’s intense winds turned one of the main transmission towers into a heap of twisted and rusted metal at the edge of Bridge City. 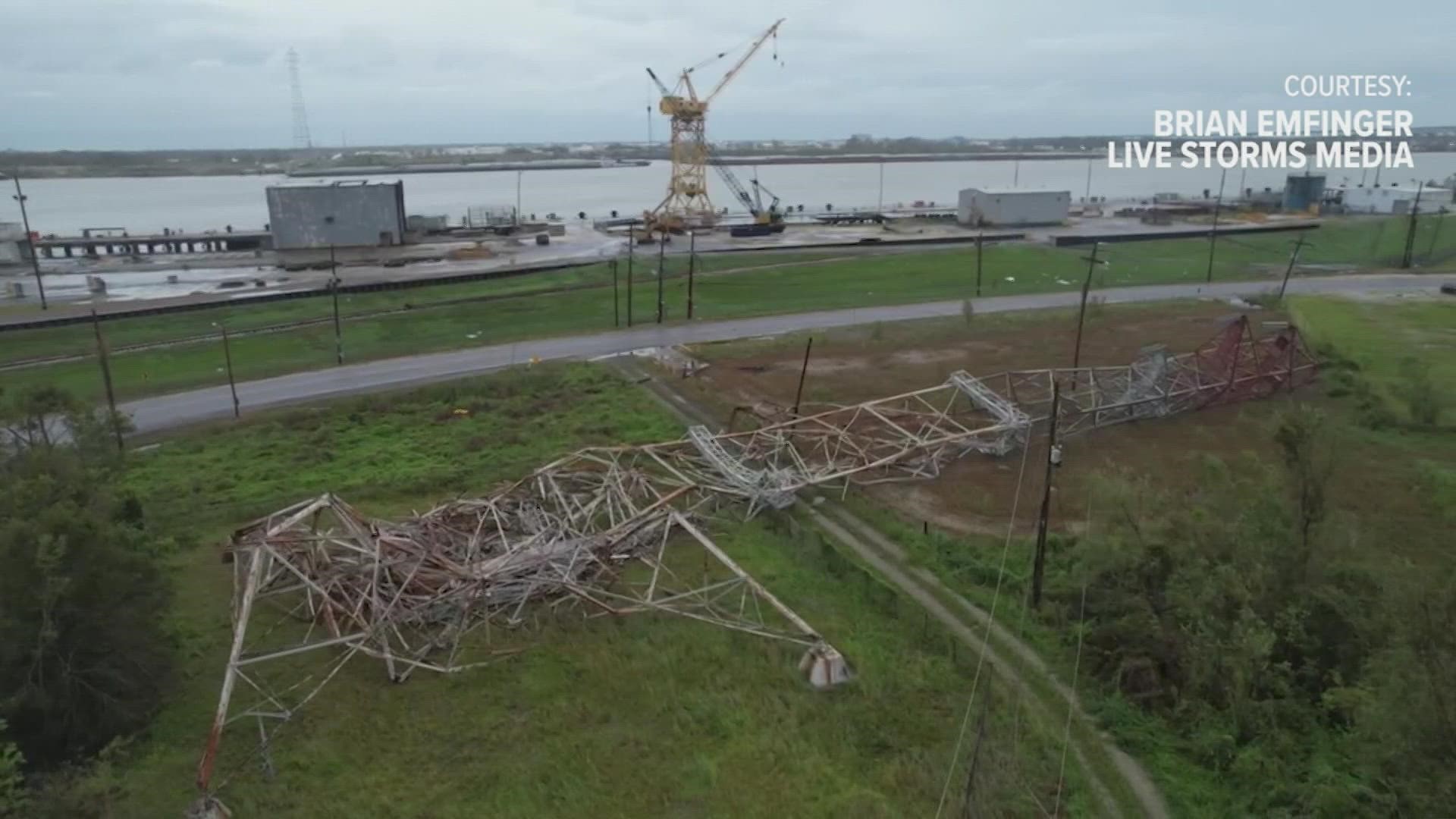 NEW ORLEANS — The entire New Orleans area south of Lake Pontchartrain is expected to be without power for weeks because all eight of Entergy’s transmission lines delivering electricity from the outside world failed simultaneously.

Hurricane Ida’s intense winds turned one of the main transmission towers into a heap of twisted and rusted metal along River Road at the edge of Bridge City.

It was a staggering sight for a tower that rose 400 feet above the Avondale Shipyard and supported power lines across a 3,800 foot span to a tower across the Mississippi River in Harahan. On Monday, those same power lines could be seen in drone footage overhead, dunked into the muddy river.

That’s only one of the entry points that failed, leaving Entergy customers on what the utility officially calls an “island.” Entergy says it’s trying to assess and investigate what it acknowledged was a “catastrophic transmission failure” and scrambling to figure out how to restore power.

Entergy Louisiana CEO Phillip May said that assessment period will take at least four days, after which more than 20,000 restoration workers will pursue at least two tracks to get the lights back on:

Getting at least one of the failed transmission lines back up and running, or by generating power from within the island itself, using the power station at Nine Mile Point, or by firing up the new power plant at Michoud, in New Orleans East.

May said he could not commit to a timeline for restoring power, but New Orleans City Council President Helena Moreno, who regulates Entergy New Orleans, said the four-day assessment period is sobering. She looked at the gnarled transmission tower in Avondale and said: “What I find unfortunate is that so often it takes something like this for changes to be made.”

May said Ida’s winds were simply too powerful for those transmission lines to bear.

“All of those towers went through Hurricane Katrina without wavering," he said. "But this wind event experienced much higher wind fields, much more devastating wind to those structures into our system than even Katrina.”

Moreno said Ida was certainly overwhelming, but the fact that all eight sources of outside power were lost at once raises concerns about how Entergy has managed its transmission system.

“I'm just wondering whether this could have been prevented. And that's what we're going to be looking into,” she said. “So, yes, the focus is on absolute restoration. That is what we're all about right now. But more will follow with investigations and getting to the bottom of how this happened and what can be done better by the company.”

May said the fees customers paid for hardening infrastructure were well-spent fixing previous storm damage and expanding with new structures that can take more of a beating in storms.

“Every time we build a new line, it's built to a higher standard,” May said. “It's using different engineered structures, things that would be able to withstand 150 mile an hour winds, that kind of thing, more robust foundations and so forth, so they can't be pushed over by the wind.”

But May said the higher fees weren’t used to improve or harden the transmission tower that fell in Avondale because it was already “robustly engineered” and had recently passed an inspection.

He emphasized that only one of the seven remaining transmission corridors needs to be restored to get outside power flowing back into the metro area from the regional power-sharing grid Midcontinent Independent System Operator, MISO.

May said that’s the first option. The second option, creating a self-generated power source from within the “island,” is not ideal, but will be pursued at the same time. First, to use the 230 megawatts of power that can be generated at the New Orleans Power Station, Entergy still needs to restore enough transmission lines to deliver electricity to customers.

That’s another point of frustration for customers, who remember that the City Council approved a rate increase to pay for the new power plant based on Entergy’s promises that it would let them make power “on an island” if the outside transmission sources were lost. The approval of those new charges was also tainted by revelations that Entergy hired paid actors to go to City Council regulatory meetings and speak in favor of the new plant.

In addition to the New Orleans Power Station, Entergy hopes to generate another 400 megawatts at the Nine Mile power station and use large generators to push the total electricity on the “island” above 600 megawatts. That would be enough to provide critical power to services and infrastructure but not enough for all customers to be restored, Moreno said.

Entergy’s two subsidiaries, Entergy Louisiana and Entergy New Orleans, are the monopoly electric utilities serving the “island” – stretching from Laplace in the west to the Twin Span bridge in the east, and south to Venice and Grand Isle.