In March of 2019, a Williamson County sheriff's deputy began chasing 40-year-old Javier Ambler after he failed to dim his headlights to oncoming traffic. 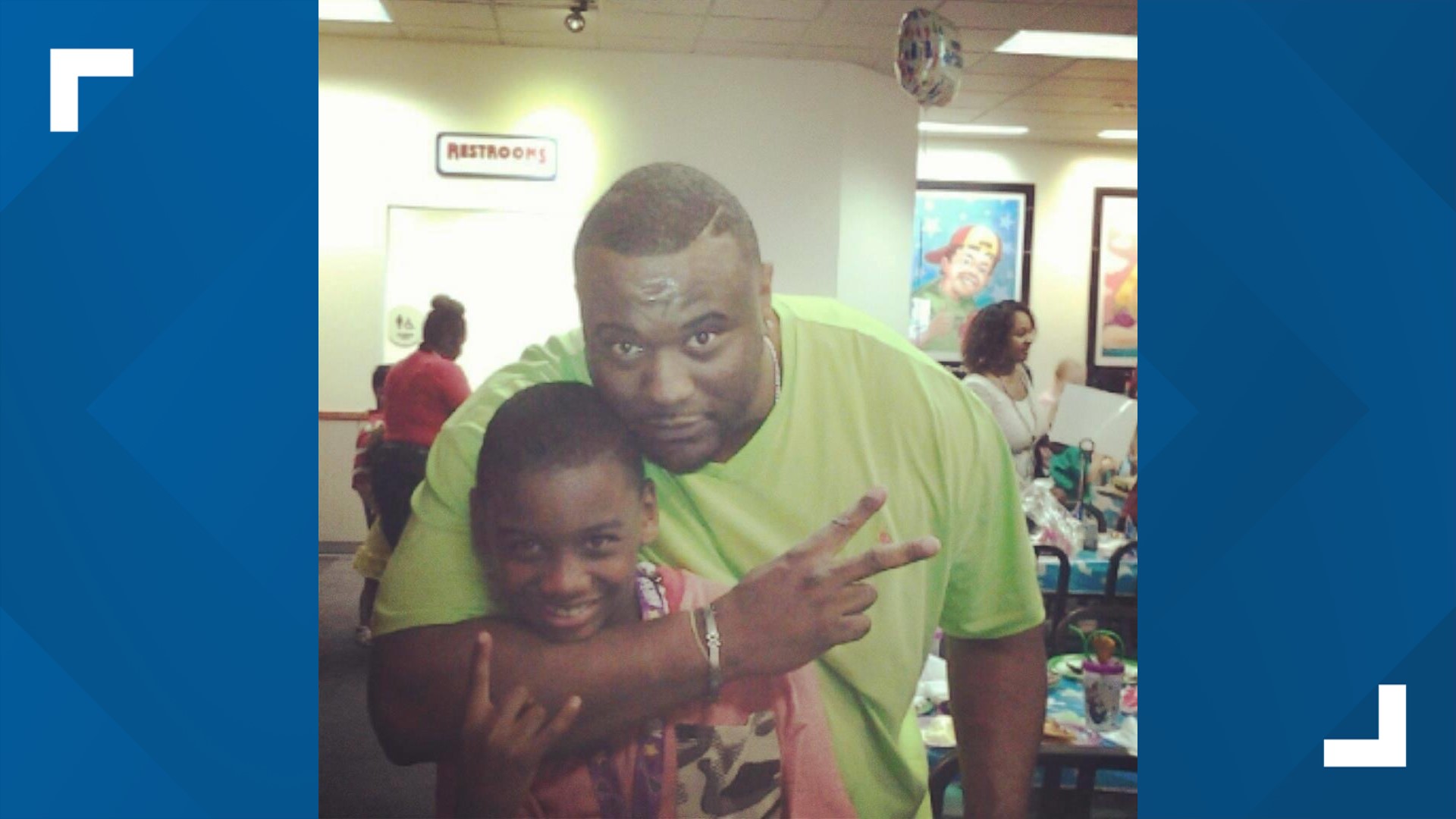 WILLIAMSON COUNTY, Texas — Javier Ambler was driving home from playing poker on March 28, 2019, when he failed to dim the headlights of his SUV to oncoming traffic.

A Williamson County sheriff’s deputy initiated a stop and began chasing him for the minor traffic violation. After Ambler apparently refused to pull over, a pursuit that lasted 22 minutes and ended when Ambler’s Honda Pilot crashed north of Downtown Austin.

Minutes later, Ambler, a 40-year-old father of two, was dying on a neighborhood street.

Records obtained by the KVUE Defenders and the Austin American-Statesman reveal that deputies used Taser stun guns on him at least three times, even as he told them multiple times that he had a heart condition and could not breathe.

The circumstances of Ambler’s March 28, 2019, death have never been revealed. The Williamson County Sheriff’s Office tried to shield information from release since receiving its first request in February.

Ambler’s death was ruled a homicide, which officials said include “justifiable homicide.” Medical examiners listed his cause of death as congestive heart failure and hypertensive cardiovascular disease associated with morbid obesity “in combination with forcible restraint,” according to an in-custody report filed with the Texas Attorney General's office. The report included no other details about Ambler's autopsy, which hasn't been released, but noted that he did not appear to be intoxicated by drugs or alcohol.

“What happened to my son?” Ambler’s mother, Maritza, asked in a recent interview with KVUE Senior Reporter Tony Plohetski. “He’s dead. How? I can’t have any closure because I need to know.”

“Dads should not have to bury their sons,” his father, Javier Ambler Sr., added.

Records give no indication about why Ambler fled. Documents show the most serious crime he would have faced before his death was for evading arrest, a low-level felony.

Because the chase ended in Austin, the Austin Police Department’s special investigations unit and the civil rights division of the Travis County District Attorney’s Office have been investigating.

District Attorney Margaret Moore said efforts to push the case forward have been hindered by a lack of cooperation by the Williamson County Sheriff’s Office. She said she also is troubled that the cable reality show, “Live PD,” which was riding with two deputies and appeared to have filmed what happened, has not provided any footage to investigators. Moore said that video could help reveal what happened that night.

But A&E, which airs "Live PD," denied reports producers were ever asked for footage or an interview by investigators. The network said it did not retain the unaired footage after learning the investigation had concluded.

"Video of the tragic death of Javier Ambler was captured by body cams worn on the officers involved as well by the producers of Live PD who were riding with certain officers involved," A&E's statement said. "The incident did not occur while Live PD was on the air but rather during the show’s hiatus, when producers are regularly out in the field gathering footage. The footage never aired on Live PD per A&E’s standards and practices because it involved a fatality.

"Immediately after the incident, the Austin Police Department conducted an investigation using the body cam footage they had from the officers. Contrary to many incorrect reports, neither A&E nor the producers of Live PD were asked for the footage or an interview by investigators from law enforcement or the District Attorney’s office.  As is the case with all footage taken by Live PD producers, we no longer retained the unaired footage after learning that the investigation had concluded.

"As with all calls we follow, we are not there to be an arm of the police or law enforcement but rather to chronicle what they do and air some of that footage and our policies were in place to avoid having footage used by law enforcement against private citizens."

Austin police officials said they could not comment on their ongoing investigation.

Williamson County Sheriff Robert Chody, whose agency has faced an array of criticism in the past year, much of it stemming from participation in the show, said that because of an ongoing criminal investigation into Ambler’s death, he was unable to comment. He added, however, that the department’s pursuit policy has changed since the incident to include more oversight.

Plohetski and the KVUE Defenders learned about Ambler’s death in February from frustrated investigators who felt stymied in their quest to understand what happened.

The Williamson County Sheriff’s Office sought to keep confidential internal affairs records in the case after a request for information in late February.

On May 18, however, the Texas Attorney General ruled that the agency had no legal grounds to withhold information and ordered that at least some materials be released. Ten days later, the sheriff’s office provided a three-page internal affairs investigative report that found no wrongdoing by deputies.

It confirms the chase started because Ambler failed to dim his headlights, which would have resulted in a ticket, and noted that Deputy J.J. Johnson, because "Live PD" was riding with him, described what he was seeing, his actions and what he thought of Ambler's mindset.

Nothing in any records released so far indicate why Ambler may have fled. He crashed his car four times before it became disabled after a fifth crash.

The investigative report, written by an internal affairs sergeant, describes what happened after Ambler’s car crashed near East St. John’s and Bethune Avenue based on his viewing of video evidence in the case.

It says Ambler got out of his car with his empty hands raised.

The investigative report states that Johnson, who had his gun out, holstered his weapon and pulled out his Taser. After Johnson told Ambler to “get down” five or six times, the report says Ambler appeared to move back toward his SUV. That’s when Johnson deployed his Taser, making Ambler go down partially.

The report says when Ambler appeared to try to stand, Johnson ordered him down again.

But Ambler did not comply with commands to put his hands behind his back.

At that point, backup Deputy Zach Camden also arrived on the scene and put his Taser into Ambler’s upper back “in a drive stun motion.”

According to the report, Deputy Camden used a knee-strike to knock Ambler off balance, and “at that time, another Taser deployment is heard, but it is unknown if it was from Deputy Johnson’s probe deployment or Deputy Camden’s direct contact/drive stun.”

The report said Ambler continued to resist the deputies for two more minutes, and that Johnson used his Taser once more.

Soon after, deputies noticed Ambler had gone unconscious. They originally thought he was still breathing, then began CPR until medics arrived about four minutes later.

Who was Javier Ambler?

Ambler was the father of 4-year-old and 15-year-old sons, the son of an Army veteran whose family settled in Killeen outside Fort Hood.

Ambler, who lived in Pflugerville at the time of his death, played football for Ellison High School and Blinn College before transferring to Texas Prairie View A&M University, according to his parents.

He worked as a rural route carrier for the U.S. Postal Service and UPS before getting jobs with two property management companies in Austin, his parents said.

He also enjoyed catering and would prepare and sell food, including Latin dishes or fried chicken and macaroni and cheese, to various venues in the Austin area that did not offer food.

"He had friends, black, white, no matter – all different nationalities, all kinds of race because that is the kind of person he was,” his mother said.

Along the way, Ambler had only minor run-ins with the law. He was convicted in 2001 for misdemeanor marijuana possession and in 2004 for driving with an invalid license.

Ambler's parents said they support the release of information about what happened to their son, including any video evidence.

Where is the case now?

Travis County District Attorney Margaret Moore said in a June 3 interview she intends to soon take Ambler’s death to a grand jury to learn more about what happened and to help determine whether a crime was committed.

She said investigators feel as though Williamson County officials have stonewalled the investigation by a lack of cooperation and she is troubled that "Live PD" has not released any footage they collected that night.

She said investigators have been attempting for months to obtain it.

Moore also said she is especially troubled that a minor traffic violation prompted the 22-minute chase that ended in Ambler’s death.

“It is of very serious concern to any of us who are in law enforcement that the decision to engage in that chase was driven by more of a need to provide entertainment than to keep Williamson County citizens safe,” she said.

RELATED: Timeline: A history of 'Live PD' in Williamson County

On June 9, one day after KVUE released the footage relating to the death of Javier Ambler, the Williamson County Sheriff's Office released this statement:

Furthermore, Sheriff Chody added extra context to the statement, tweeting "In her scramble to justify why it has taken her office so long to address the Ambler incident, the Travis County D.A. says our Department is stonewalling. Nothing could be further from the truth. We remain ready to assist the investigation in any way."

In response to the incident, the Austin Justice Coalition urged lawmakers to make a dramatic change to policing.

“Just days after Gov. Greg Abbott said he doesn’t want to see a death like George Floyd’s in Texas, new video shows that it already has occurred in Texas,” executive director Chas Moore said. “Javier Ambler died as a result of a Williamson County Sheriff's Deputy tasing him to death. His words – I can't breathe – were the same ones that George Floyd struggled to say as he was suffocated by a police officer. They were the same words that Eric Garner said. Abbott said Texas would respond to George Floyd’s death. Well, Texas should have responded long ago; it would have saved Javier’s life. It might have saved Sandra Bland’s life. Now more than ever we need our elected officials and lawmakers to make a dramatic change to our system of policing.”

LISTEN: 'I just want peace all over no matter what color you are' | Amplifying black voices during Austin protests