Marine mom works through heartache and humiliation to honor her son

After her son was killed by an active shooter on U.S. soil, she donated $135,000 to an organization to honor him. The organizer ended up using the money for a new car and sex toys. 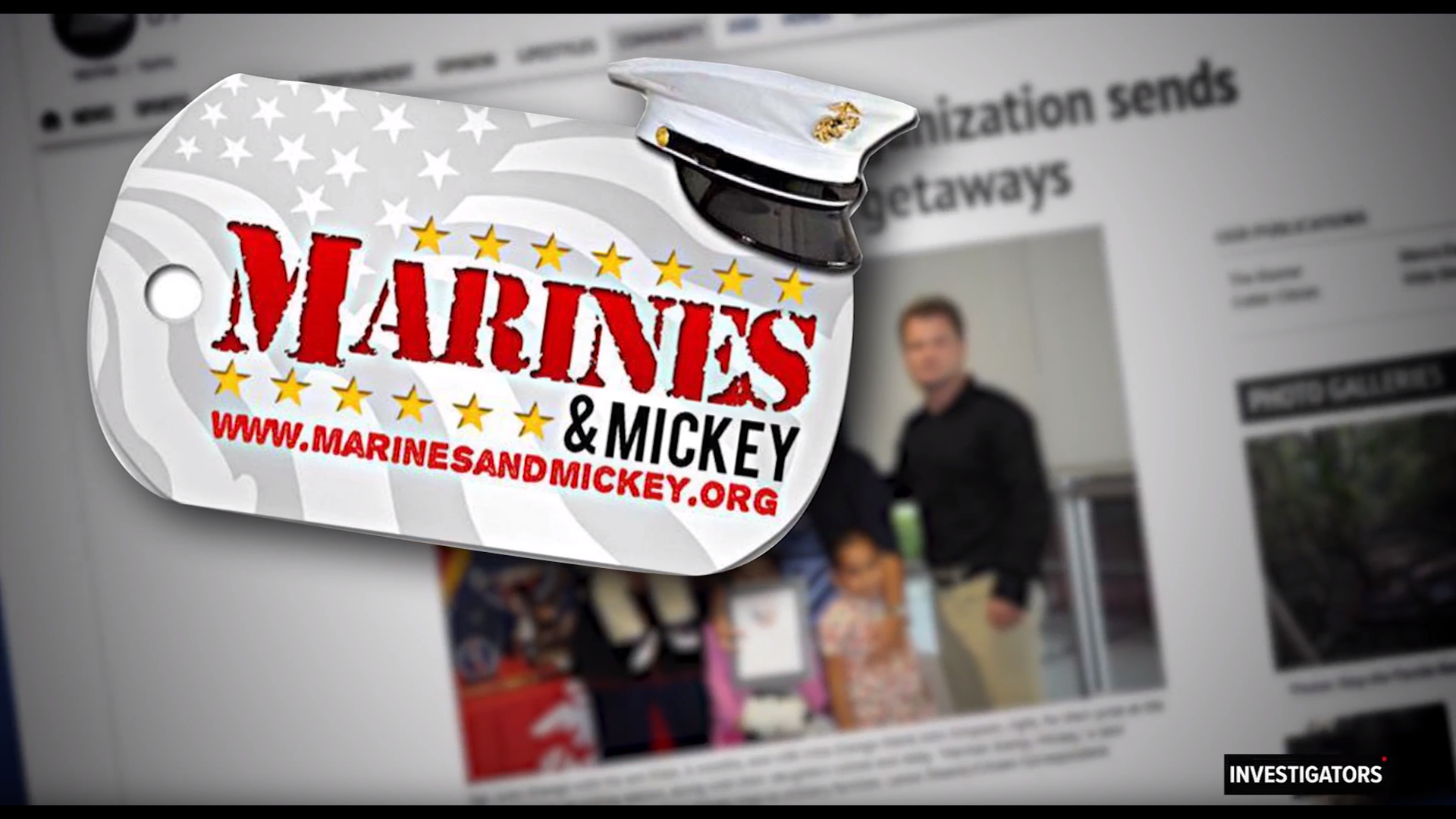 A man accused of targeting Marine families in their darkest hour has been stopped by a Marietta mom. John Simpson, the founder of Marines and Mickey, is currently behind bars, accused by federal prosecutors of wire fraud.

For the first time, Cathy Wells sat down to talk openly with 11Alive about why it was important to see this through.

Wells was a single mom with one child - Skip. No matter his age, the two had a summer tradition. Every summer, they went to Disney World. They took their first trip when Skip was 3 years old.

Memories of Disney with Skip

Flipping through the scrapbook and sharing her memories with 11Alive Investigator Rebecca Lindstrom, she’s reminded of Skip’s favorite ride - the monorail. Another caption read, “My favorite things at Disney: getting wet and the hotel room.”

In 2015, Skip, now an adult in the Marines, decided to swap roles. This time he paid for the trip. Sitting on a table outside his bedroom mom pointed to a frame. In it was a picture of Skip holding the American flag. On this visit, Skip was chosen service member of the day.

It was a magical day in the magic kingdom. Neither Cathy nor Skip have ever gone back.

Cathy asked her son, “Where?”

Here – was U.S. Navy Reserve Center in Chattanooga. Muhammad Youssef Abdulazeez fired at two military locations that day. This was the second. Cathy said her son died trying to warn others.

“He went back towards the garage area and yelled active shooter in an effort to get everyone over the fence and into safety.”

The text message is her last communication from him. She said she never imagined he would be injured or die in an attack on U.S. soil.

Her fears were more practical. She thought he might get into an accident on I-75, driving from Marietta to his post in Chattanooga. Wells said her son learned to drive later in life, so he had limited experience on the freeway.

As Cathy spoke, there was a softness in her voice. But it’s her son’s room that speaks her grief the loudest. Three years after his death, his clothes hang in the closet. His shoes are still lined up under the bed. There are trophies, pictures and a model of the Disney monorail on a shelf.

Tucked in with the memories of Skip’s life, are reminders of his death, including a pair of cleats worn by Peyton Manning who played football at the University of Tennessee in college. Written on one shoe it says, “In memory of Skip Wells. I am thankful for his service and sacrifice to our country.”

“My room looks into his room. I mean, grief comes in waves and I never know what’s going to trigger it,” Cathy said.

It was that grief, and a deep desire to honor her son, that led her to John Simpson. A family member ran a Google search, looking for ideas on how to put the donations made in his name to good use. What they found was "Marines & Mickey," a charity that seemed to embody the things her son loved most.

By February 2016, Cathy had donated or directed nearly $60,000 to help the non-profit do just that. She’d also donated $75,000 of her own money to help the Marines & Mickey founder, John Simpson, open a barbershop in her son’s name.

But according to the federal criminal complaint, Simpson used that money instead to pay his own rent, buy a car, groceries, go out to eat, purchase custom swim wear, makeup - even pay the tax bill for his ex-wife’s sex shop.

“What he actually spent the money on was twice as humiliating [as the fact] I even gave him the money. The fact he used it the way he did - sex shops!”

Court records list five different bank accounts used by Simpson to move the money. Most withdrawals are simply listed as ‘cash’, leaving it unclear how the money was actually spent.

But that’s exactly what Simpson is accused of doing, right from the start. Cathy said he introduced himself as a retired Marine master sergeant, a Parris Island drill instructor, and former Recon Marine. He wears a tattoo on his right arm usually associated with a Recon Marine – a jack of all trades.

But Jason Weeks, who served in the Marines himself had his doubts.

“His resume was pretty stout, but he wouldn’t look me in the eye,” said Weeks.

A tip from a friend who happened to live in Simpson’s hometown in Anderson County, South Carolina led them to confront Simpson about his background.

“He hit me up randomly, had no idea that there was an association or affiliation whatsoever and said, ‘Hey, I suspect someone from my hometown of stolen valor. Can you help me out?’ And he sent me his profile and that was the ah, ha. Like, I knew it,” Weeks said.

So, the two invited Simpson to the Semper Fi Bar and Grill in Marietta with a lie of their own. A check from a large donor. But when confronted, Cathy said Simpson denied it all.

Still convinced, she drove to South Carolina looking for proof. She found it buried in an old newspaper article. Simpson went AWOL 3 years into his tour. He was found driving on a suspended license, trying to get away with a phony fundraiser for a fire station.

“He was AWOL at the time, going door-to-door asking for money for something that didn’t exist,” she said.

Cathy took her findings to the FBI – and 11Alive. That’s when we found a trail of criminal and civil cases, fraudulent checks and business promises never fulfilled. We also found Maria Maldonando. She said Simpson raised money in her son’s name after he died of brain cancer - then tried to keep most of it.

The criminal complaint also details a fundraiser in New York for Penelope, a terminally ill daughter of another Marine. Her mother, Carina Stillwell, said Simpson promised her family one of those trips to Disney, but when her daughter’s health prevented them from going as scheduled, he gave the trip to another family.

In text messages shared with 11Alive, Simpson and another woman associated with the charity, Kimberly McDonough, continued to reach out, promising to visit and do something special for the family. But Stillwell said the organization never made good on those promises.

The effort, nicknamed No Marine Stands Alone, raised money to help families that couldn’t afford to attend their child’s graduation. On top of donations made by families to a GoFundMe account, Simpson would solicit donations from graduates themselves.

“He was getting into Marines' accounts, getting them to give him their account numbers and then they would just go in and start taking money,” explained Weeks.

Based off of the complaints reported to him, instead of approved donations of $10 to 20 dollars, Marines would find hundreds missing from their accounts.

During our 11Alive investigation, we also met Jack Hughes, a Vietnam veteran assaulted at the airport in Charlotte, accused of stolen valor. Simpson set up a GoFundMe account to raise money for him, after learning he was struggling financially.

Hughes said he never saw a dime. He counts himself as just one more face used on a GoFundMe page simply to deceive donors.

“There’s a lot of veterans out there that need what he said he had to offer. But he didn’t, he didn’t come through with any of it,” said Hughes.

When our stories first aired in 2016, Simpson reached out claiming he was innocent of the accusations. In an email, he claimed to have helped dozens of Marine families with trips to Disney and financial assistance to attend their child’s graduation from boot camp. But when Lindstrom asked for receipts, contact names and numbers, or pictures as proof, Simpson stopped communicating.

Lindstrom also tried to call all of the board members listed in the 990 tax filing from 2014, provided by Simpson. None of her messages were returned, and in some cases, she was unable to find working phone numbers.

Even with so many potential victims before her, Cathy believes it was Skip’s story that generated enough money and media interest to thrust Simpson’s actions into the public eye.

“I felt like this is what Skip wanted,” said Wells.

Wells has created her own foundation in her son’s name and welcomes any questions about it. She said they focus on transparency, the people and groups they help are obvious.

The Lance Corporal Skip Wells Foundation makes a donation to the band and ROTC at Sprayberry High School each year, where he attended. It also offers scholarships to students who may not have stellar grades, but do have the drive to attend college. Cathy said the foundation has been able to help eight students so far.

“Skip didn’t have a grade point average, he wasn’t a stellar student, but he was fun and he had the heart and the desire,” she said.

Wells has not been back to Disney World, but she still carries Mickey and her memories everywhere she goes. On her left arm, there’s a tattoo of the famous mouse. Above it, taken from a handwritten note from her son, is a tattoo that says, “It says I love you mommy. Love, Skip.”