Peter Van Sant takes an in-depth look at the disappearance of teacher and former beauty queen Tara Grinstead, who went missing from Ocilla, Georgia, in 2005. 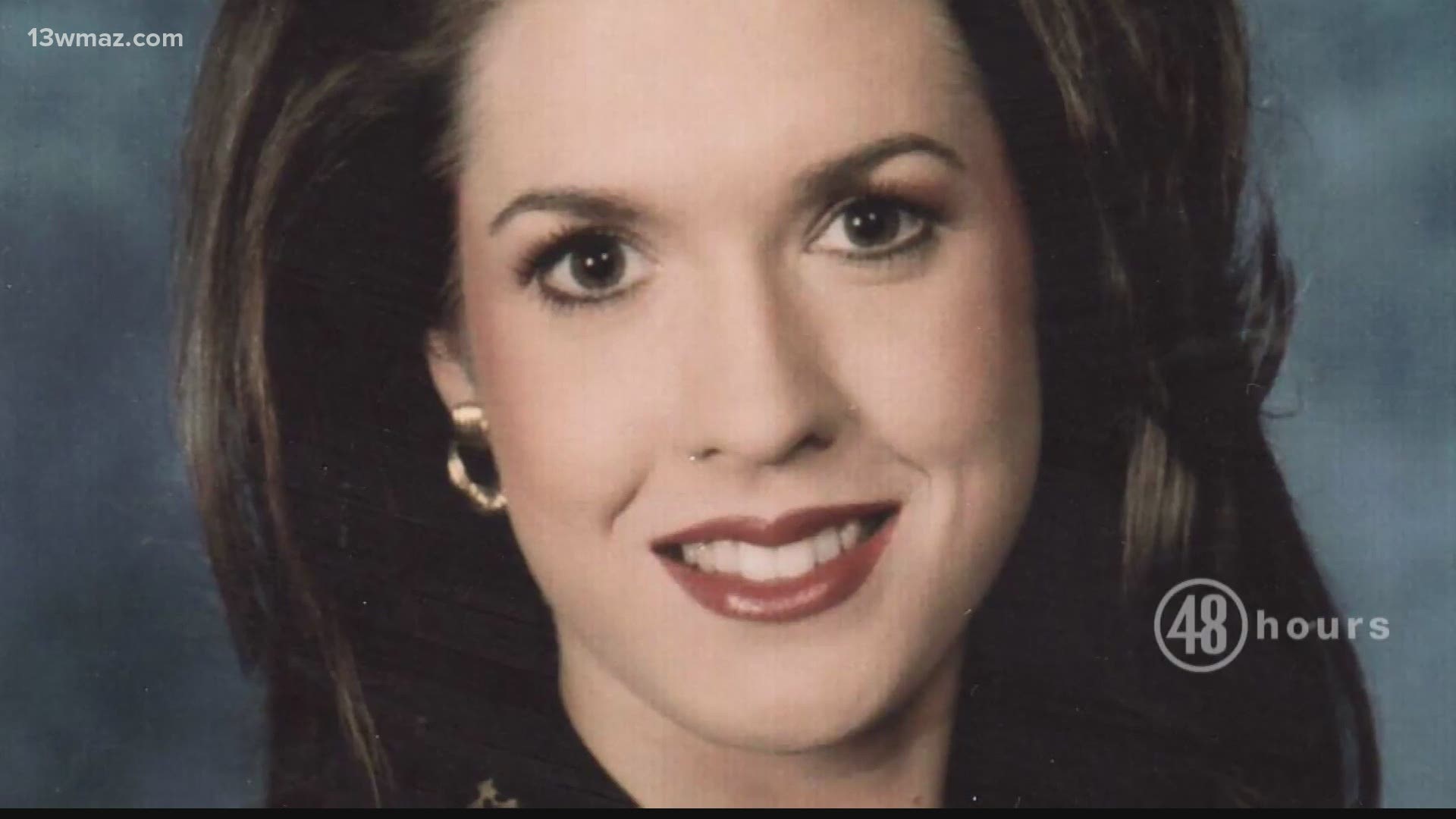 The CBS News investigative show, 48 Hours will air an in depth episode on the Tara Grinstead case Saturday, looking at crucial missed evidence that could have possibly lead to solving the case a decade earlier.

The episode airs at 10 p.m. on 13WMAZ in place of the third hour of the Andy Griffith Show marathon.

Since the popular teacher and beauty queen first disappeared, 13WMAZ followed the case of Tara Grinstead. For twelve years, there was no body, there were no arrests, and no answers.

Grinstead just seemed to vanish from her home in Ocilla in Irwin County back in October 2005.

A break finally came in the case with an arrest in February 2017. Here's a full timeline of what's happened since then

The Georgia Bureau of Investigation announced agents arrested Ryan Duke, who was 33 at the time. They charged him with murder more than a decade after Grinstead went missing. The bureau described him as someone who 'never came up on [their] radar.' At this point, Grinstead's body hadn't been recovered yet. Bo Dukes, the man accused of helping dispose of Grinstead's body, would be arrested in March of the same year and charged with three charges in Ben Hill County.

A few days later, more than 40 people started searching the Hudson Pecan Company pecan orchard in Fitzgerald for Grinstead's remains. Judge Melanie Cross also issued a gag order, preventing law enforcement and those involved in the case from speaking to the media. It would later be revealed human bone fragments were found at the orchard.

It came to light Duke faced previous charges for a DUI in 2010. He was released on bond, but the police report says his mother asked police to take him back to jail.

Judge Cross heard arguments against the gag order from several media companies, including WMAZ, who were saying the order was too broad and unnecessary. As a result, Cross let investigators and lawyers in the case comment on the court process, but not on possible evidence, pleas or confessions. The order didn't restrict the media from reporting on the case or block access to public records. Cross also backed off on her earlier order that said all hearings in the case would be held behind closed doors.

A little over a month after his arrest, an Irwin County grand jury indicted Duke on six charges: one count of malice murder, two counts of felony murder, aggravated assault, burglary and concealing the death of another.

Duke was not present when his then-defense lawyer, John Mobley, entered his not-guilty plea before Judge Cross. Several friends of Grinstead sat in on the hearing, and Anita Gattis, Grinstead's sister, gave 13WMAZ a statement.

13WMAZ and our Atlanta sister station, WXIA, along with other news outlets went to court again to fight the gag order in the case. They stood in front of nine Georgia Supreme Court justices, saying the order impeded on news outlets' first amendment rights. Grinstead's sister even supported the removal of the order. However, public defender for Duke said the coverage could prevent Duke's right to a fair trial. It would be several months until we heard back from the court.

Almost five months after the hearing, the Georgia Supreme Court finally threw out the gag order, originally enacted by Judge Cross. The order was in place for over a year. Duke's defense lawyers tried to appeal the ruling to reinstate the order a few days later, but the court ultimately rejected the appeal and upheld their opinion.

After Duke's public defenders filed 26 new motions in his case, he hired a new team of lawyers out of Atlanta -- Ashleigh and John Merchant. They took on his case free of charge. The motions included things like a request to prohibit Duke from being seen in jail clothing or shackles, disqualifying jurors who knew Grinstead, and dismissing the indictment altogether.

More motions were passed by Duke's lawyers, including asking for the trial to be moved out of Irwin County to a new venue and for a private investigator to help with Duke's defense. The motions were denied at the end of November, except the motion for change of venue, which was denied in December of the same year.

Duke appeared in court for the first time since February 2017. At this point, around 33 motions were filed for Duke, but his lawyers withdrew about a dozen. Irwin County Superior Court Judge Bill Reinhardt set the trial date for April 1, and asked the attorneys involved to create a questionnaire for people in Irwin County to fill out, to see if a qualified jury could be selected.

An 11-page confession showed up on the Up and Vanished podcast discussion page. The GBI could not confirm if the documents came from the case file, but it seemed to recount Duke's February 2017 confession to them. In the alleged confession, Duke explains how and why Grinstead was murdered.

Duke's attorneys filed a motion in January of 2019, asking a judge to grant him bond on the basis that he had no prior felony arrests or convictions, was arrested without incident after he was questioned about Grinstead's death and poses no threat of running away from the area. GBI Agent Jason Shoudel revealed new evidence at the hearing, saying Duke's DNA was found on a glove found in Grinstead's yard after her disappearance.

After Duke's bond was denied, he was back in court for a second day. This time the prosecution asked Judge Bill Reinhardt to require the defense to provide an alibi for Duke on the night Grinstead went missing.

Duke's defense team was given until March 8 to present their discoveries to the court, but Judge Reinhardt turned down their requests for the state to pay for an investigator to help them out. The lawyers filed a motion saying they couldn't compile information in the time given and needed more time to prepare for the trial. Their motion for a delay in trial was denied three days later.

A notice of intent was filed on March 11, saying Duke was at his mobile home in Fitzgerald the night Grinstead went missing. The document says Duke was with his brother, Stephen, Bo Dukes, who is a co-defendant in the case, and Ben McMahan, who is now deceased. At some point during the night, Bo and McMahan left the trailer while Stephen and Ryan were asleep in different areas of the trailer. During Bo's Wilcox County trial in March, Stephen testified, saying he couldn't confirm that happened.

During Bo Dukes' trial, it was revealed law enforcement had Bo and Ryan's names on file since 2005. Their names showed up at least twice, once in a 2005 Irwin County Sheriff's Office report and another time in a 2008 GBI interview. The special agent in charge at the time took the fall while on the witness stand, saying it was his fault it was not looked into.

Ryan's co-defedant in the case, Bo Dukes, had one of his trials in Wilcox County, where he was convicted of lying to the GBI and concealing Grinstead's death. He was then sentenced to the maximum sentence of 25 years. Bo still faces charges in two other counties.

Duke's trial was scheduled to start April 1, 2019, but the court delayed it in order to hear arguments from the defense regarding the state funds for an investigator and expert witnesses.

The Georgia Supreme Court said they don't have jurisdiction to act on whether Duke should be granted state funds for a private investigator. They can only do that with a trial judge's signature, so the matter was directed back to Reinhardt.

A court hearing for Duke set for Friday, September 13, revolved around whether the state can pay for private investigators for his defense.

After two and a half hours of arguments at the hearing, the prosecution and the defense told Judge Reinhardt they'd like the state's Supreme Court to hear the funding arguments before the trial begins.

The DA’s office says Reinhardt must sign a "certificate of immediate review" before the Georgia Supreme Court can hear the funding arguments. There is no estimate on when a trial date will be set.

They heard whether the state should pay for investigators and outside experts to help Duke's lawyers prepare for trial.

Now, over a decade later, Peter Van Sant takes an in-depth look at the disappearance of Tara Grinstead and where the case stands now. That's coming up Saturday night at 10 p.m. on 48 Hours on 13WMAZ.