Grady Patterson was overseas for over 3 months missing the birth of his third child. 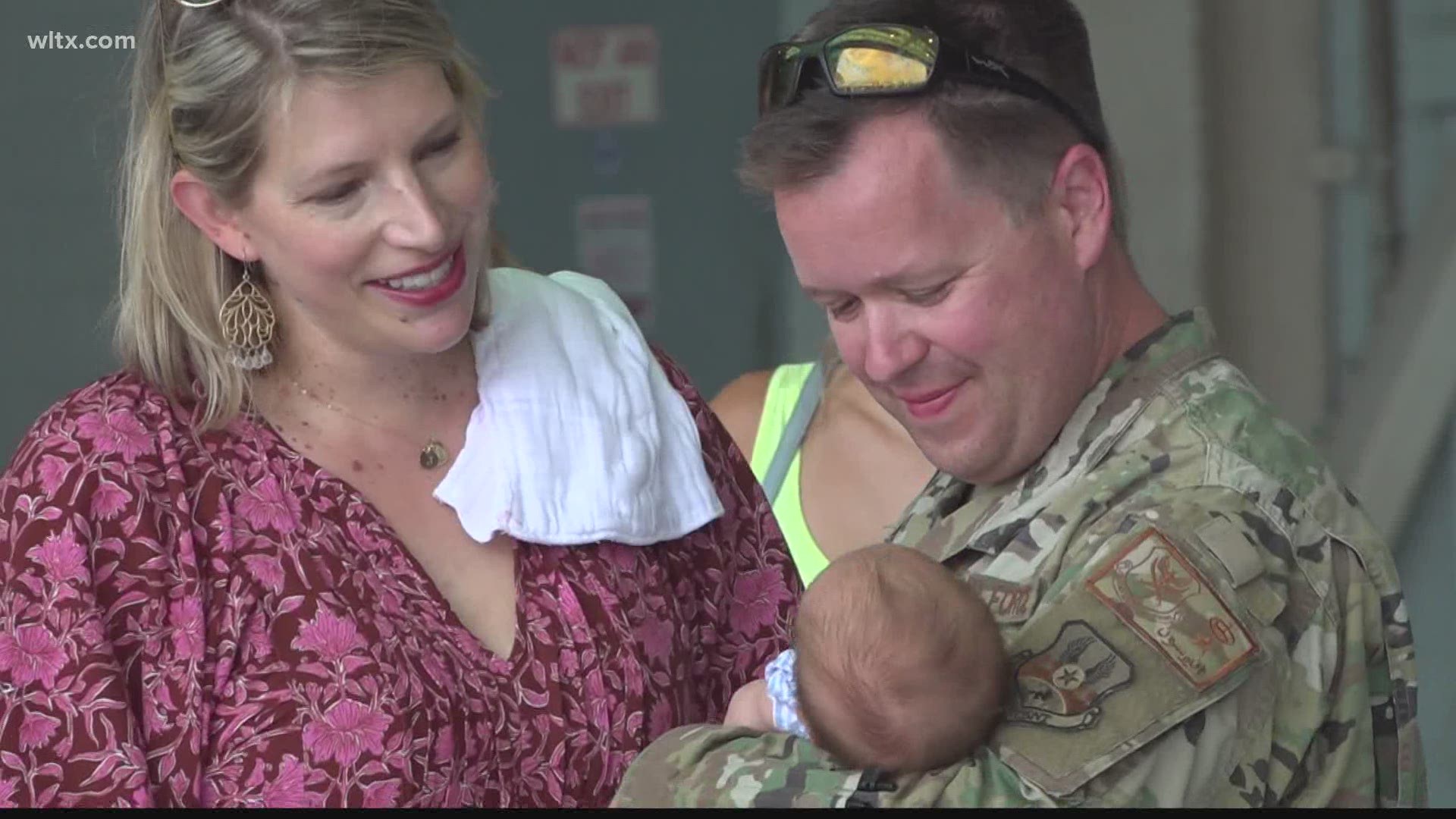 RICHLAND COUNTY, S.C. — At 12:23 p.m. on Sunday around 300 airmen from the McEntire Joint National Guard base landed on American soil for the first time in three months. One, however, had an extra special surprise awaiting him.

The men and women from the 169th Fighter Wing had been deployed in Saudi Arabia serving our country.  The McEntire hangar was full of happiness, tears, love and joy as hundreds greeted their missed loved ones.

“We’re waiting for my daddy," said Leslie Gallman, "I’m so excited because we’ve been waiting for him a very long time”

“I just know that he loves us so much and we mean the world to him and he means the world to us," Emily Culp said of her dad.

Families made signs and even dogs dressed up for their reunions.

This is Avalon, she is the best girl. pic.twitter.com/KHWrYrW3KF

One family, though, was very anxious to see their loved one again.

Kate Patterson and her 6-week-old son James waited for their husband - and dad - Grady to arrive Sunday.

“Baby James was born while he was gone, he is 6 weeks old so this is the first time that Gray is meeting James and James is meeting Gray," Kate said smiling.

While many first meet their newborns in the hospital, Grady was giving back to his country. So, when he stepped off the bus after landing at McEntire, his welcome home was extra special.

This is Grady Patterson meeting his 6-week-old son James for the first time today as he arrived home from Saudi Arabia. Full story on @WLTX at 6 p.m. pic.twitter.com/MwiM9cRWQv

“It’s just a rush of joy and thankfulness that we were able to go over there and do what we needed to do but get home and see him and see her and see the rest of the family," Grady said. "It’s just incredible thankfulness and joy.”

A reminder of the sacrifice these men and women make to keep our country safe.

“Politics are politics," said Colonel Akshai Gandhi, the 169th Fighter Wing commander. "But, at the end of the day, these men and women have stood to support the Constitution of the United States and they go when called and they do their duty and do it extremely well."

I mean come on.... the cuteness! pic.twitter.com/TS0XncZPFy