Among first in her family to graduate high school, teen breaks cycle of parents' substance use disorder

“The best day so far (in my 18 years) is probably graduating,” said Makayla Whyde. 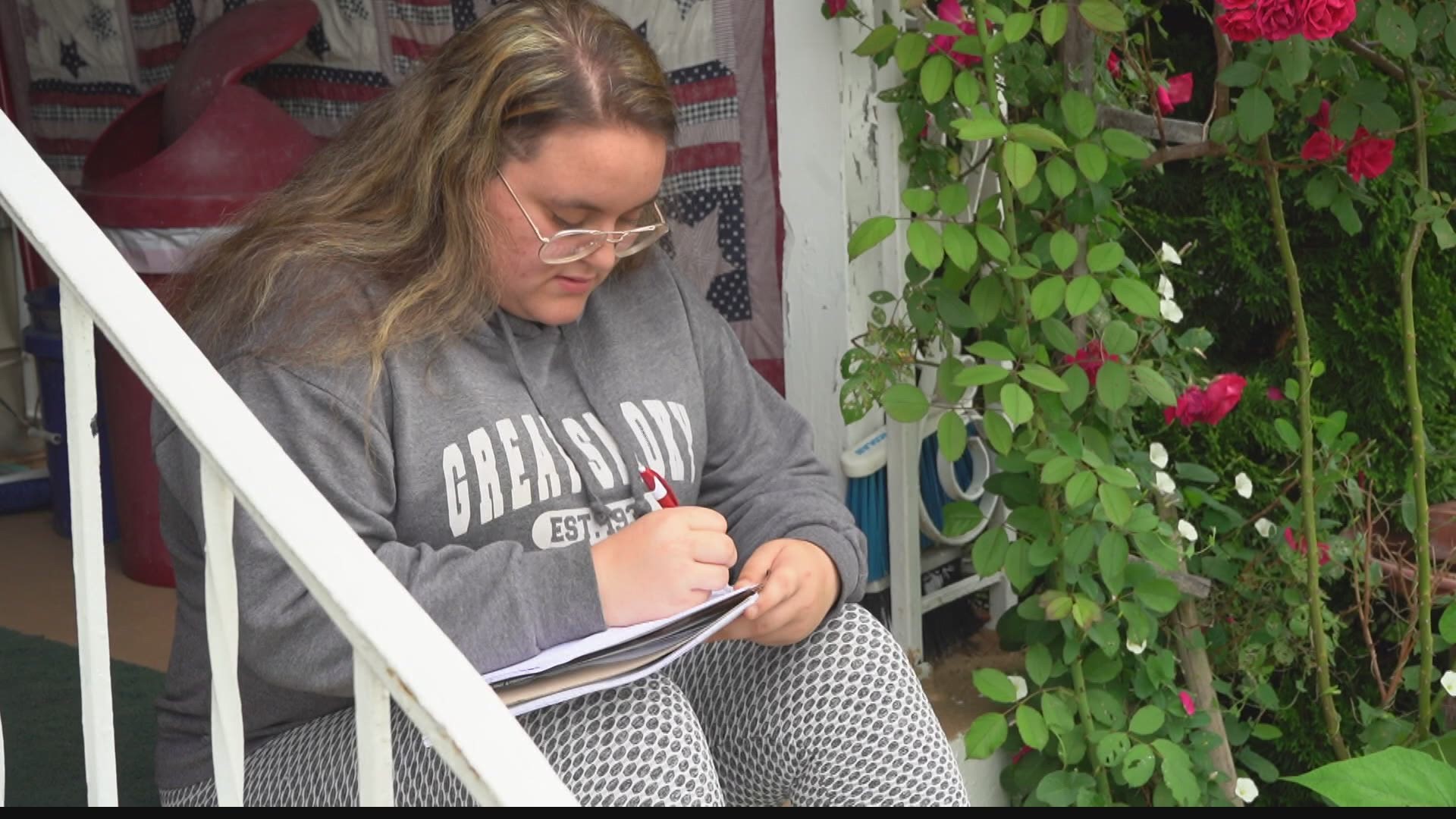 INDIANAPOLIS — As she walked across the graduation stage at Eastern Hancock High School, all Makayla Whyde could think of was how happy she was to be done with high school.

“We’re all like a family there, but it’s time for me to leave the nest,” said Makayla, sticking her arms out like a bird ready to fly. "The best day so far (in my 18 years) is probably graduating."

She said the bad days were too many to count.

“I don’t think I've had just one hard day. I’ve had a lot of hard days,” she said. “The day of my mom’s funeral and the day of my father’s cremation,” were two days that were among the most difficult.

Whyde said she gets through the tough days through her love of writing.

“I don’t know how to express how I feel when I’m writing because I’m zoned in, but when I’m done, it’s like a whole weight has been lifted off my shoulders,” Whyde said.

“She overdosed,” said Whyde, referring to her mother. “It was right after my ninth birthday and I had just started fourth grade, and I found out the first weekend of school.”

A photo of her mother holding Makayla as a baby sits framed in her grandparents' house.

“I had that photo in my graduation photo slide,” said Whyde.

Her grandmother said Makayla’s mother certainly knows all her daughter has accomplished.

After her mother passed, Whyde said she lived with her father for about ten months. She said the beginning of those months were going well. He was present and “was making pretty good money at this landscaping company. Then (he) just kinda started making the wrong decisions, hanging out with the wrong people and started getting into drugs again,” said Whyde.

“I actually spent my tenth birthday sleeping in a van (with her father)” after his girlfriend had kicked him out. She told him that Makayla could stay with her but Whyde’s dad wanted his daughter with him.

“Everything was good until he started getting back on the drugs,” said Whyde.

Whyde’s grandmother flipped through a photo album which included a photo that seemed almost frozen in time. Whyde’s mother and father were smiling.

“That’s when they were happy,” said Whyde’s grandmother.

Losing her father and the meaning of family

“I was supposed to go to my aunt’s house for the summer. I was supposed to be there for a week. (Her father) dropped me off there and never came back because he went to jail. I stayed there over summer. He was supposed to come get me for school. He never did,” said Whyde.

She said her Aunt Lisa texted her father to ask if he was going to come to get his daughter or if she should enroll Makayla in the same school as her daughter and son, Makayla’s cousins.

“My dad was like ‘I don’t have a place for her right now, enroll her in school, do whatever you got to do,’” Whyde recalled.

A few years later, when Whyde was 16, her father passed way.

“He passed away of an overdose, too,” Whyde said. “He had heroin laced with fentanyl. They found him outside the gas station,” said Whyde.

She said a makeshift memorial was created at the gas station “but I’ve never been. I can’t bring myself to go,” said Whyde.

But throughout it all, Whyde never gave up on her studies.

During middle school, Whyde said she transferred between Greenfield-Central and Eastern Hancock schools and back again.

“It was hard to get adjusted back to the curriculum that the schools teach because they were at different places, so that was the most confusing thing about moving back and forth,” said Whyde.

Makayla lived her aunt for “about four years” and then moved in with her older brother “for about three or four years.” She is now back with her aunt. She shared a room with her cousin Hannah. Their relationship is much more like sisters than like cousins, and it’s with support of her cousins, other family and “self-motivation more than anything” that Whyde was able to stay on target with her studies and graduate high school.

“I love learning, it expands my mind,” said Whyde. “I like science facts, and history.”

She says her favorite subjects are “social studies or writing, any kind of language arts or reading. I like that I can express myself with writing.”

But for most seniors in 2021, it wasn’t just “senioritis” they had to worry about, but also the pandemic.

“I didn’t want to do any of my work. My time management was terrible,” said Whyde, reflecting on e-learning.

But she did her work, and Whyde, along with her two cousins, are the first in their family to graduate high school. Whyde said it is possible for people to “break the cycle.” She said she has some family members in recovery and that seeing them in recovery makes her proud.

“I’m proud because I can imagine it being my parents,” said Whyde.

She said she knows any child of a person who struggles with substance use disorder and is in recovery is proud of their parent and that it's possible for children to break the cycle.

“It doesn’t have to be, 'Oh yeah, people that have drug-addicted parents are going to fall into the same trap.’ That’s not necessarily true,” Whyde said. “Try to break the cycle. Try to be your own person. Try to be your best person."

Whyde said she is now college-bound. One of her cousins is working with his father and the other is currently job hunting.

“I want to be a psychologist. I’m going to Ivy Tech and taking general classes and transferring to IU in the fall,” said Whyde.

Makalya's story was initially reported by the Greenfield Daily Reporter.

What other people are reading: