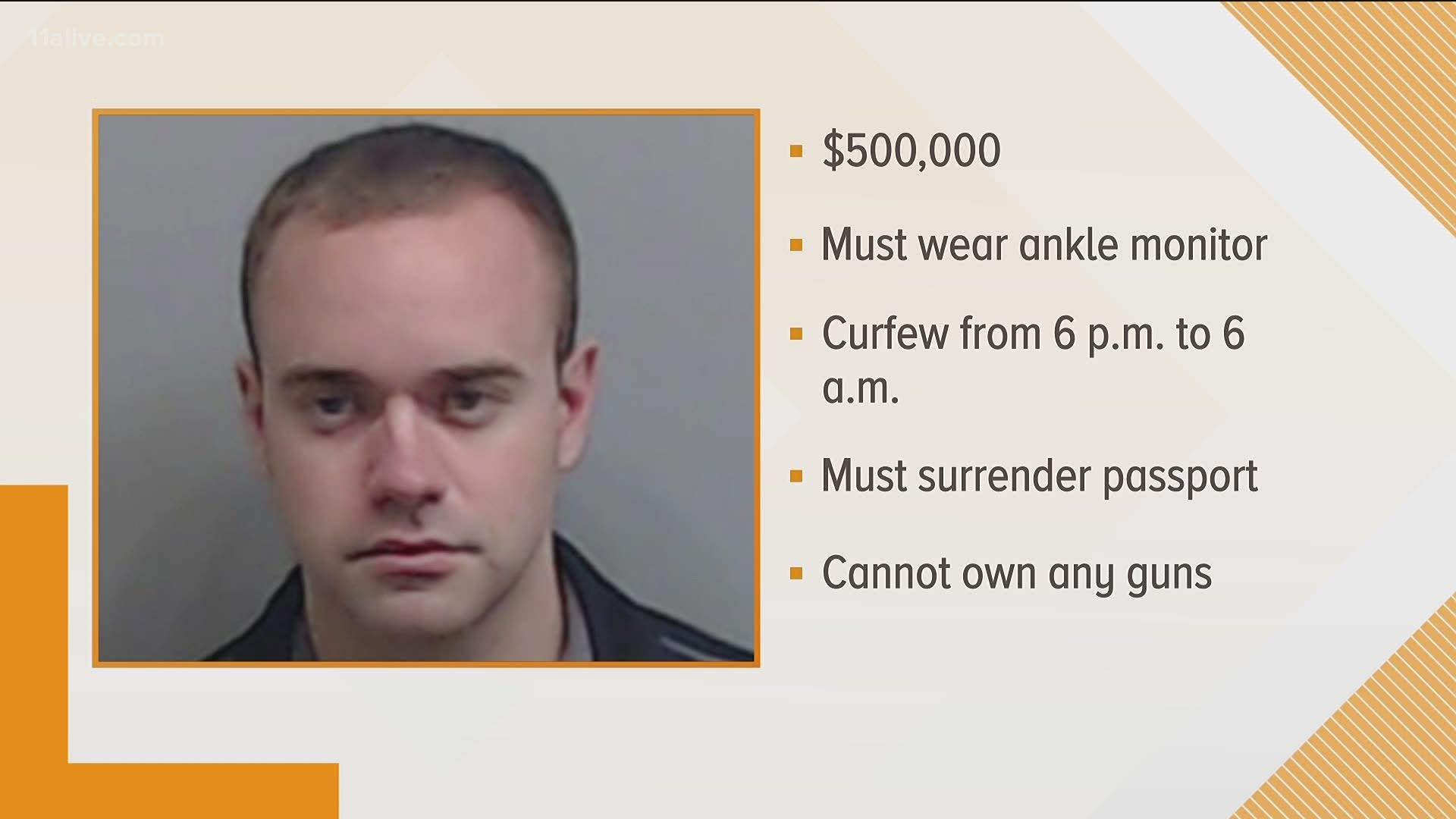 He will now wear an ankle monitor and must adhere to a 6 p.m. - 6 a.m. curfew, among other conditions.

He also had to surrender his passport, can maintain no possession of firearms and have no contact with the witnesses of the June 20 shooting or other Atlanta Police officers.

A judge granted the bond for Garrett Rolfe, 27, during a virtual appearance in court Tuesday. He was originally scheduled to be in court last week, however, it was rescheduled because it was supposed to happen the same day as Brooks' funeral.

The fired officer faces felony murder and 10 other charges in the shooting of Brooks on June 12 during a DUI stop at a southeast Atlanta Wendy's.

Rolfe struck him twice in the back with his service weapon when Brooks fired a Taser in his direction while running away after a struggle.

During the hearing, Rolfe's defense made the argument that the former officer was a stand-out employee with the department, citing his police record and quoting character statements made by his former co-workers, friends and others.

"(Rolfe) treated all suspects with respect," one character statement said.

His team said that Rolfe's actions - shooting Brooks - were within reason for the situation because Rolfe was defending himself. But the state disagreed.

Brooks, the state argued, was "not a threat to Officer Rolfe in any way" because he was running away when he was shot twice in the back. The state then reiterated its belief that Rofle and the other officer on scene, Devin Brosnan, did not act quickly enough to render aid, a fact that the state said contradicted claims of Rolfe's "good character."

The state asked for Rolfe not to be granted any bond, a request Brooks' widow Tomika Miller echoed in an emotional statement to the court.

"My husband did not deserve to die," Miller said through tears, her voice cracking throughout her statement.

She admitted that her husband was not perfect, but she explained how she and her children would forever struggle without Brooks to help support them.

The judge presiding over the hearing ultimately ruled in favor of the defense and granted Rolfe a bond, though it was much steeper than their request for a $50,000 signature bond - but less than the state's $1 million bond request.

The state pushed for the court to also compel Rolfe to hand over the passcode to his phone and outline communications he may have had between him and any officers, but the judge deemed that to be unnecessary.

In a statement, Brooks's family said that while they are disappointed that his accused killer was granted bond, they understand it's just "one step in the long quest for justice for Rayshard."

"Rather than looking at this process as a series of 'wins' or 'losses,' it's imperative that we continue to push for systemic change within our criminal justice system," they said. "We will be diligent in our pursuit of justice for this family and will do everything in our power to make sure that Rayshard Brooks did not lose his life in vain."

Granting bond is indeed the latest step in the controversial case involving the former officer. One of the attorneys representing Rolfe lambasted Fulton County District Attorney Paul Howard for what he characterized as "unethical" pursuit of charges to benefit Howard's reelection.

The attorney said that Howard's decision to bring charges before the Georgia Bureau of Investigation finished examining the case was "rash," and that there is no legal basis for the 11 charges Rolfe faces. He insists that his client's actions were justified.

The Law Enforcement Legal Defense Fund told 11Alive it will be paying for all the costs associated with defending Rolfe against the murder charge. The national nonprofit based in Virginia chose Rolfe's case - like many that they take on - because they believed he was wrongly charged.

He's also getting funding for his legal team from the Georgia Law Enforcement group, which said it has already raised all the money needed for the former officer's defense.

Officer Devin Brosnan, who faces a total of four counts in the same incident, is out of jail on a $30,000 signature bond.

Re-watch the entire hearing below.