Is the rise of lumber prices causing a spike in thefts?

CMPD records show 16 lumber thefts over the last month, between May 3 and June 3. In each report, lumber was stolen off job sites under construction. 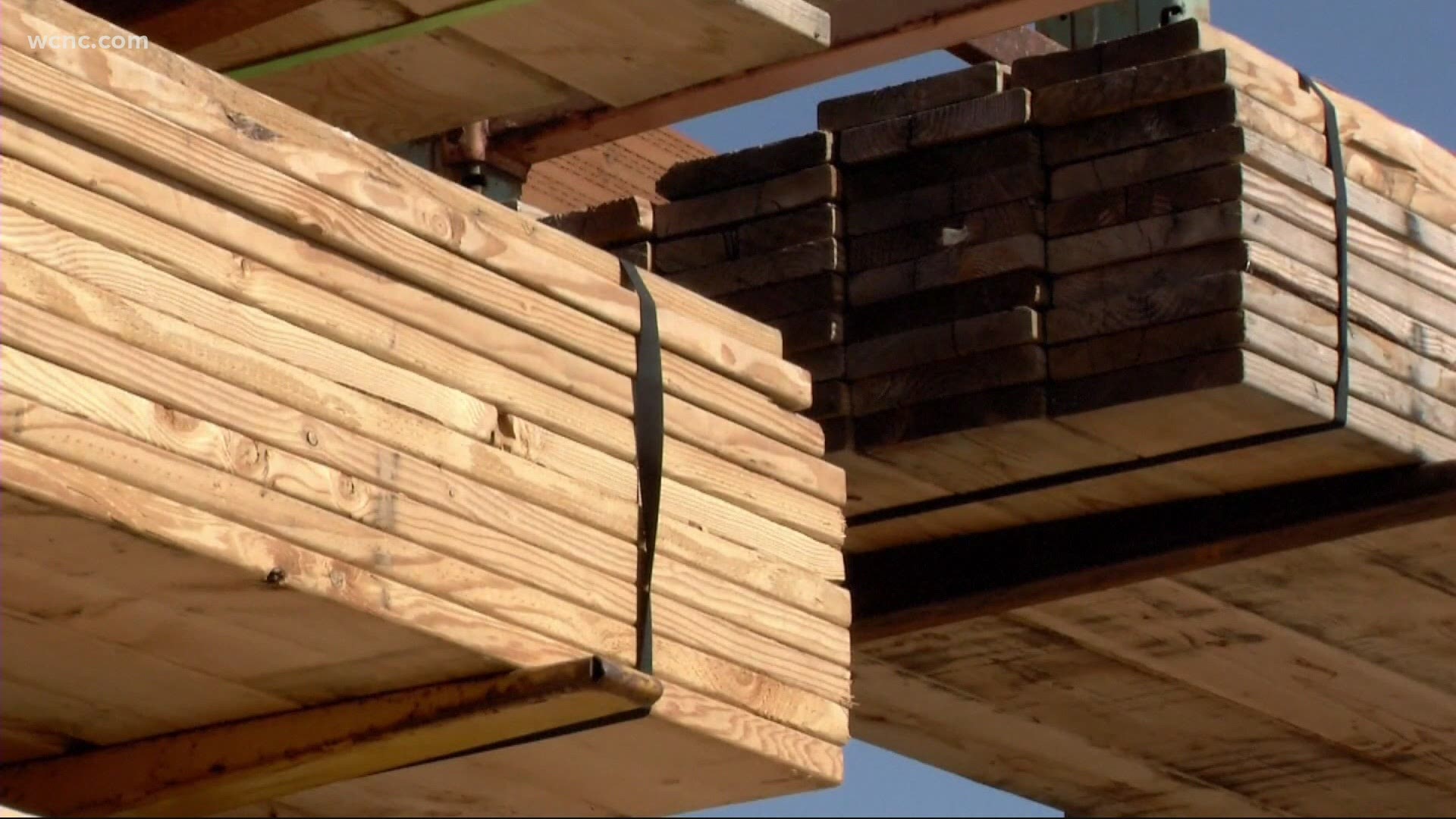 CHARLOTTE, N.C. — The price of lumber has tripled since the start of the pandemic and remains high, despite a slight drop in stock futures. For example, what used to cost $350 a year ago per thousand board feet, now costs $1,200.

According to the National Association of Home Builders, those high prices have led both new and existing home sales to slow, as some have been priced out of the market. Now, some fear another consequence is emerging, theft.

Charlotte-Mecklenburg Police records show 16 lumber thefts over the last month alone, between May 3 and June 3. In each report, lumber was stolen off job sites under construction. Police say they need to evaluate more data to know if those numbers are higher than usual or not.

But Web Hatley, whose family has owned Queen City Lumber since 1946, said he wouldn’t be surprised.

“Oh, I wouldn’t doubt that a bit,” Hatley said, “I knew that would be a problem because when you got a stack of plywood that’s worth that much money it will get gone in a hurry.”

In one police report, a home builder claimed $4,700 worth of sheets of OSB boards were stolen. In another, more than 160 pieces of two-by-fours were swiped, valued at $3,500.

Also gone, valuable lumber, stolen from the site of a Habitat for Humanity home under construction.

Police reports show the site was hit three times over the last month.

“More than I have ever seen as long as I’ve been here,” Hatley said, saying in the 37 years he’s been running the business, he’s never seen prices this high.

“At first when the pandemic started there were shortages and the prices went up and maybe doubled, and then it kind of went back down for a while and we thought everything was fine, and then when everything started opening up, some of the prices tripled,” he said.

As an example, Hatley told WCNC that Oriented Strand Board (OSB), first went up to $20 but is now near $45 to $50, while half-inch plywood was less than $20 before the pandemic, but is now $60. He said the pandemic has also caused lumber shortages.

More stories on WCNC: US jobless claims drop to 444,000, a new pandemic low

“You can’t get material, treated plywood, OSB, across the board,” he said.

Hatley admitted, like everyone else, he has no idea when lumber’s high prices might finally start to fall -- saying it could happen once people stop buying lumber – but said he’s hopeful prices drop soon.

“I hope it’s not going to last much longer, but I said that four and five months ago,” he said.

Wake Up Charlotte To Go is a daily news and weather podcast you can listen to so you can start your day with the team at Wake Up Charlotte.
SUBSCRIBE: Apple Podcasts || Spotify || Stitcher || TuneIn || Google Podcasts

All of WCNC Charlotte's podcasts are free and available for both streaming and download. You can listen now on Android, iPhone, Amazon, and other internet-connected devices. Join us from North Carolina, South Carolina, or on the go anywhere.