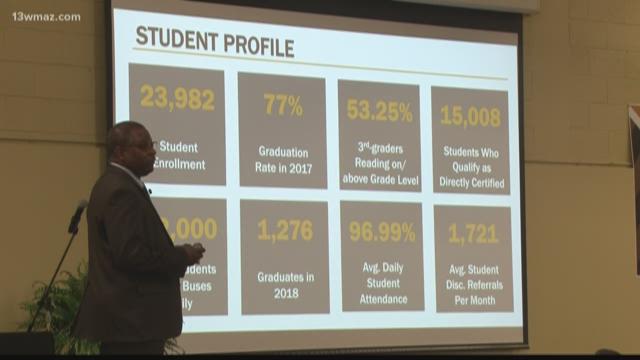 "A failing school system is one that the state says has a grade of F. We don't have an F grade, we haven't had an F grade in three years. People need to get out of what they do and recognize where we are today," Jones said.

Since his arrival in 2015, Jones says the district has seen major improvements.

Their average daily student attendance is almost 97 percent and the school buses are running effectively.

"We couldn't get buses to schools on time. We couldn't pick students up and get them home on time. Now, we're able to say that they arrive at school or are able to get to their place of departure with a 90 percent on time rate," Jones said.

Even with these milestones, Jones said third grade reading levels still need a lot of improvement.

"We still need to continue to focus on getting students to read. Even though 53 percent of third graders are reading on grade level, that's not good enough. You would not like it if your child was in that other 47 percent. We've got to continue to do that," Jones said.

Jones said enrollment dropped a bit since last year, but that graduation rates on the rise. It was about 77 percent in 2017, and this year's update will be released soon.

"Our graduation rate is supposed to go forward, correct? If it goes backwards, you get disappointed. When it comes out September 19th, we're going forward," Jones said.

The district's 212 community partnerships are another improvement.

One of them being MidSouth Community Federal Credit Union. President Roy Bibb received the Superintendent VIP Award and said he felt optimistic after Jones's speech.

"The leadership that we have, and the direction we're headed in is something to get excited about," Bibb said.

Jones said they're on track to hit an 80 percent graduation rate by 2020.