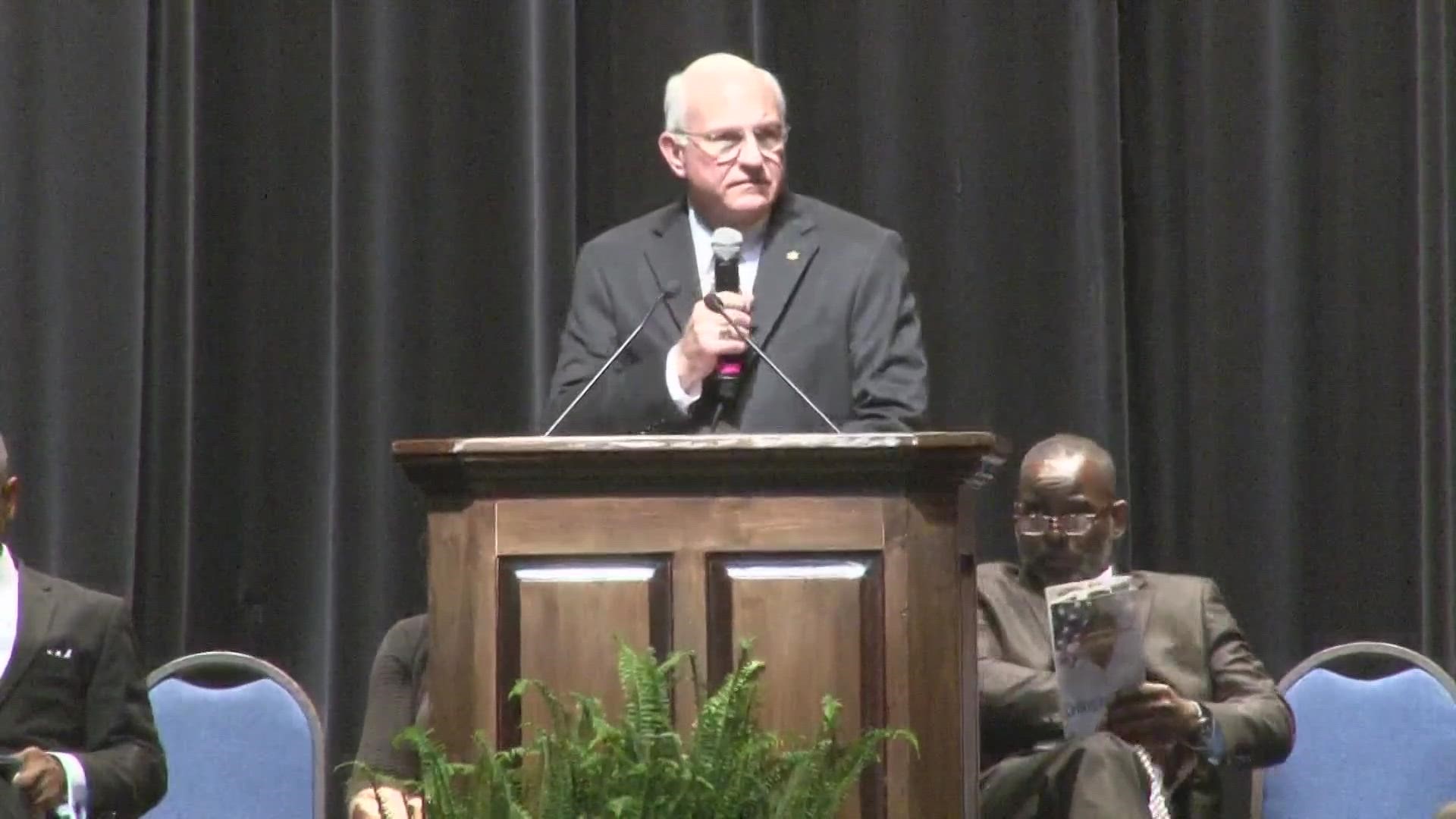 Knight was fatally stabbed and another deputy was injured in a fight with an inmate at the Bibb Law Enforcement Center last week.

After a processional and final viewing, Rev. James Head lead the service with a prayer and scripture reading of Psalm 23 before a selection by the Union Baptist Church Praise Team.

“The Lord is my shepherd; I shall not want.

He makes me to lie down in green pastures; he leads me beside the still waters.

He restores my soul: he leads me in the paths of righteousness for His name’s sake.

Yea, though I walk through the valley of the shadow of death, I will fear no evil: for you are with me; your rod and your staff, they comfort me.

You prepare a table before me in the presence of my enemies; you anoint my head with oil; my cup runs over.

Surely goodness and mercy shall follow me all the days of my life, and I will dwell in the house of the Lord forever.”

“Everyone you see around here is here to grieve with you and support you in this time of deep sorrow,” said Davis.

He said Deputy Christopher Knight began his career at the Bibb Sheriff’s Office in July 2018 and seemed to have corrections work in his soul.

“He established himself to be a dedicated and resourceful member of the team…worked to foster a community environment among inmates and other deputies,” said Davis. “[He was] known as a go-to guy for other members of his squad and other members of the department when they were having problems or needed advice.”

Davis concluded by saying Knight was becoming a leader and will forever be remembered as a young man on the move. He vowed the department will never forget Knight's commitment to the sheriff’s office and his contributions to the field of law enforcement.

“While the nation is in upheaval over incidents involving law enforcement, we are here in Macon, Georgia celebrating and honoring the life of Deputy Christopher Knight who lost his life in the line of duty, seeking to secure protection of others,” said Miller.

He shared a story about when he recently ran into Deputy Knight at the grocery store. Miller said he thanked him for his service and dedication to the department.

“I could look in his eyes and tell he loved what he did, and no one was going to take that away from him,” said Miller. “We don’t always understand the concerns of those daily in law enforcement, but the reality of their burden is made plain to us… we are all in great debt…words are not adequate.”

Knight’s co-worker Lt. Chance Eady concluded the reflections portion of the service. He shared a story about when he was transferred and met Knight for the first time.

“He walked in with a confident walk. He said, ‘I’m going to be your go-to person,’ and he was correct,” said Eady. “Anything I needed, I called Mr. Knight. He would always call me back and let me know when everything was completed.”

Eady also said Knight was a family man who deeply loved his 2-year-old daughter Zemirah, or as Knight sometimes called her, ‘Z-Force.’

“He loved his family. During the weekends -- when he was off -- he always looked forward to spending time with his little baby girl. He always talked about being with his family; his little angel,” said Eady.

A silent reading of Knight’s obituary followed and was accompanied by a recording of his favorite childhood song, the ‘Theme from Jurassic Park’ as composed by John Williams.

Knight was then eulogized by Pastor David L. Stanley, the senior pastor of Union Baptist Church, who decried the pay disparity between law enforcement officers and professional athletes.

The service concluded with a recessional to the song ‘You’ll Be in My Heart’ by Phil Collins. Knight will be interred in a private ceremony at the Macon Memorial Park Cemetery on Mercer University Drive.

The complete ceremony can be viewed here:

'He was my best friend': Bibb deputy's family speaks after his death