"It wasn't World War III, but, doggone it, man, it was pretty bad," said Rodger Moore.

It was a more than $5 million derailment--Georgia's most expensive train wreck on record, according to Federal Railroad Administration reports that begin in 1975.

The cost could be even higher, too. That figure represents only damage to the train and the track.

Neither the state Environmental Protection Division nor the Norfolk Southern railroad would say what the total cost will be, partly because the cleanup is still underway.

But the train company says they're footing the entire bill.

That Norfolk Southern train came off the tracks near Perry in October.

Nobody was hurt, but 13WMAZ has learned it may have been a closer call than initially believed.

We asked Houston County Fire Chief and EMA Director Chris Stoner,."How close of a call was it to being a real catastrophe?"

"Five, 10 seconds maybe," he answered. "If it was another three or four cars back that derailed first, who knows what would've happened?"

Stoner says the train had toxic chemicals aboard.

"I believe it was some acids, some ammonia maybe," he said. "But it was significant enough hazmat that we would've had to evacuate a large area."

When we asked Norfolk Southern what, specifically, was on the trains, they declined to say. Instead, a spokeswoman said, "For safety and security reasons, Norfolk Southern does not release information regarding our train schedules and routes to the public."

Stoner says the cars containing those chemicals weren't among the 32 that derailed.

We definitely said a prayer and some thanks that afternoon," he said.

According to the chief, trains carrying hazardous material are common there.

"Day and night, day and night," he said. "There's tons and tons of hazardous materials that go down that rail." 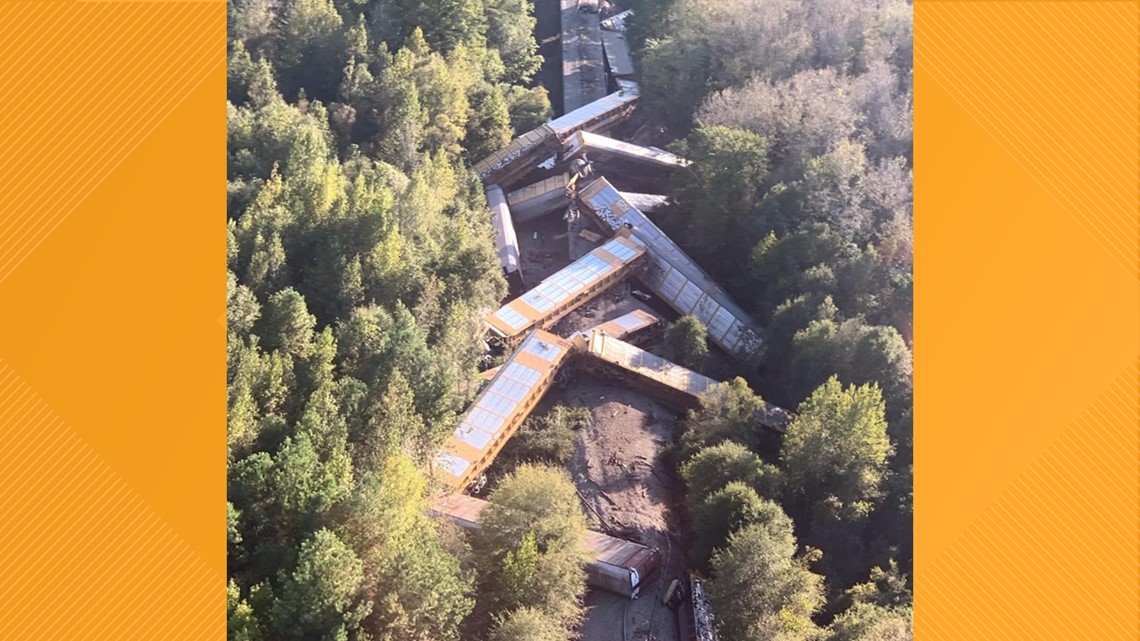 "The track goes through a heavily-populated area of Warner Robins in front of pretty much the heaviest-populated industrial area in the state at Robins Air Force Base," he added.

By email, a Norfolk Southern spokeswoman told WMAZ that:

"Even if they had derailed, there's a pretty significant chance they wouldn't have ruptured unless it just hit a valve, or something would've had to happen just right for those chemicals to be released," he said.

Norfolk Southern stressed that their accident rate is low. Their spokeswoman said. industry-wide, "99.99 percent of hazardous materials shipments moved without a train-related incident."

Federal records also show the total number of rail accidents among all rail companies has declined since 2000.

However, those same records show that in the last 5 years on record, there have been at least 55 reported train accidents in Central Georgia, involving at least 6 different companies.

The amount of reported damage to track and train caused by those accidents varied widely, from just hundreds of dollars to millions.

However, it's a different kind of potential cost that may have been on Chief Stoner's mind that day in October, as he sat high up in a helicopter, looking down on destruction.

"Honestly, it was just, 'Wow,'" he said. "You sit there and look at something like that and it's amazing, in a bad way."

We invited Norfolk Southern twice to speak on camera for this story, but they declined.

The company's spokesperson answered many of our questions but not all of them.

All of the questions we asked Norfolk Southern, as well as their answers, are below.

WMAZ's first round of written questions is below. Norfolk Southern's response are in bold.

As our reporting continued, new questions came up. Below are the second round of questions we sent to Norfolk Southern:

This is Norfolk Southern's full response:

There were three cars on the train carrying hazardous materials. These three cars, however, were not involved in the derailment.

"The transportation of hazardous materials by rail is subject to strict oversight by the Federal Railroad Administration (FRA), the Pipeline and Hazardous Materials Safety Administration (PHMSA), and the Department of Homeland Security (DHS). Railroads work in partnership with these and other local, state, and federal entities on train routing, security, tank car design, emergency response, etc., to ensure hazardous materials are transported safely and securely. In addition to following federal regulations, railroads apply their own special operating procedures for trains carrying hazardous materials. Visit the AAR website for additional information on hazmat transport by rail. You might find this AAR fact sheet useful as well.

The freight rail industry has an impressive safety record, with 99.99 percent of hazardous materials shipments moved without a train-related incident. These materials are found in many products that people use every day, such as bottled water, garden fertilizer, hand sanitizer, paint, batteries, and household cleaners.

Norfolk Southern provides information about the hazardous materials we transport to state agencies and first responders. We also offer training to first responders in communities near our rail lines to help ensure they are prepared to respond safely and protect the public in the unlikely emergency event involving hazmat transport. For safety and security reasons, Norfolk Southern does not release information regarding our train schedules and routes to the public."

RELATED: 'It kind of threw me off:' Drivers take detours on day 2 of train derailment clean up on Georgia 247 Spur