“If somebody was looking for a job right now, productions can’t hire enough crew at this point... It’s a good opportunity for someone to make a career change." 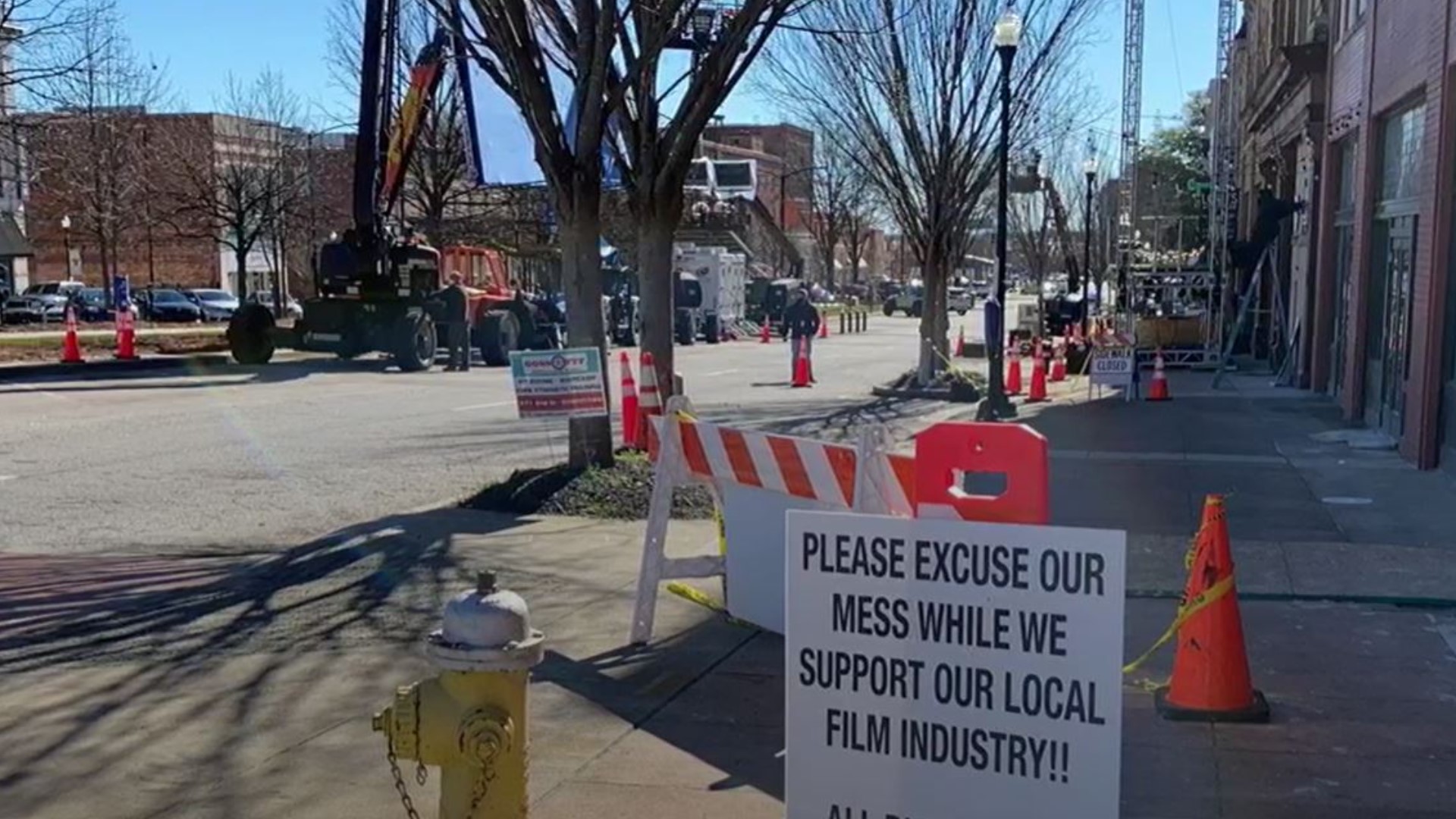 The film industry is booming again in Georgia with 50 productions currently working in the state, according to the Georgia Department of Economic Development.

“There’s so many filming in Atlanta right now there’s not space for anyone to move and we want to take advantage of that,” said Aaron Buzza, vice president of development for Visit Macon and the county’s prime contact for the film industry.

While productions typically work under code names shrouded in secrecy, the FLOTUS signs posted near First Baptist Church of Christ give a major clue at what is being filmed through Saturday at the church and atop Grant’s Lounge on Poplar Street.

Last year, Showtime announced “First Ladies” a one-hour drama series that will feature Viola Davis as Michelle Obama. Davis also is the executive producer of the show that highlights Betty Ford, Eleanor Roosevelt and Obama in its first season.

“This is a longer project that may come back,” Buzza told members at Thursday’s Visit Macon board meeting. “We may see them again… We’d love to have them longer but they have scenes all over.”

A number of movie and TV productions that were put on hold due to the COVID-19 pandemic have resumed shooting while other new programs and films are in development.

Large sums of money are being spent to adhere to coronavirus restrictions and protect cast and crew from the deadly virus.

“If a film is spending $60 million they might spend another $20 million on COVID protocols,” Buzza said.

The pandemic is affecting another movie prospect eyeing Macon but “still may be in play,” he said, but could not release further details.

Cameras will definitely be back next month to work on a Christian film that deals with pornography and sex trafficking.

Light of Life Films out of Joplin, Missouri, has booked Luther Williams Field, the old Municipal Court in the Macon-Bibb County Government Center, Rosa Parks Square and a railroad underpass on Poplar Street for filming next month.

Haynes, who has appeared in “Stranger Things,” “Necessary Roughness” and “Teen Wolf,” will star as an aging, addiction-riddled baseball player at the end of his career. He has a life-altering encounter when he crosses paths with a trafficked girl, said co-producer and director Matt McCaulley.

“If he makes the wrong decision there, he can cost that girl her life,” McCaulley said in a phone interview Friday from snow-covered Missouri. “So there’s an element of life and death there.”

Jasha Balcom, a star baseball player from Dublin who doubled for Chadwick Boseman in the Jackie Robinson story “42,” also will be working as the baseball coordinator on the film.

McCaulley, who had hoped to spend about three weeks filming in Macon, said the pandemic forced them to alter plans.

“We bit off a lot, but it will get done and we’re shooting for the fall of this year to winter for release,” McCaulley said.

Buzza is anxious to see Marvel’s “Black Widow,” which was filmed at the Terminal Station in fall of 2019 and is set for a COVID-delayed release on May 7.

“That was fun and it shows Macon in a fun way,” Buzza said of the superhero flick starring Scarlet Johansson.

“Black Widow” was the last major motion picture to film in Macon-Bibb before the new coronavirus began spreading across the globe and curtailed movie-making.

Last summer, TBS’s “Go-Big Show” gave Macon an opportunity to lure filming back to town for the extreme talent competition. Cameras captured the action inside the nearly empty Coliseum while the drive-in audience outside was watching a big screen while socially distanced.

Buzza believes that if the show gets renewed the county stands a good chance of being in the spotlight once again. The proximity to the Marriott City Center allowed the cast and crew to isolate themselves as COVID-19 cases were on the rise last summer.

With the backlog of production, there could be even greater opportunities ahead.

Because crews are looking for a variety of architectural styles and time periods, he wants to have potential sites and property profiles already available for busy scouts.

Anyone interested in offering up their building or property to filmmakers should email maconfilmcommission@gmail.com with contact information and a few good pictures, including a wide shot of the front of the structure and any remarkable features on the property.

Even vacant farm land could be a prospect for certain films.

With movie scouts so busy these days, having more options readily available could speed up the process and seal the deal.

“The more I can provide on the front end, the easier it is for them to come to Macon,” Buzza said. “Just because you sent me information doesn’t mean you have to say yes.”

He would also like to hear from caterers and other businesses, such as portable toilet rental agencies, that could come in handy on a film set.

Industry representatives tell him that business is booming and they are looking for help.

“If somebody was looking for a job right now, productions can’t hire enough crew at this point,” he said. “It’s a good opportunity for someone to make a career change.”