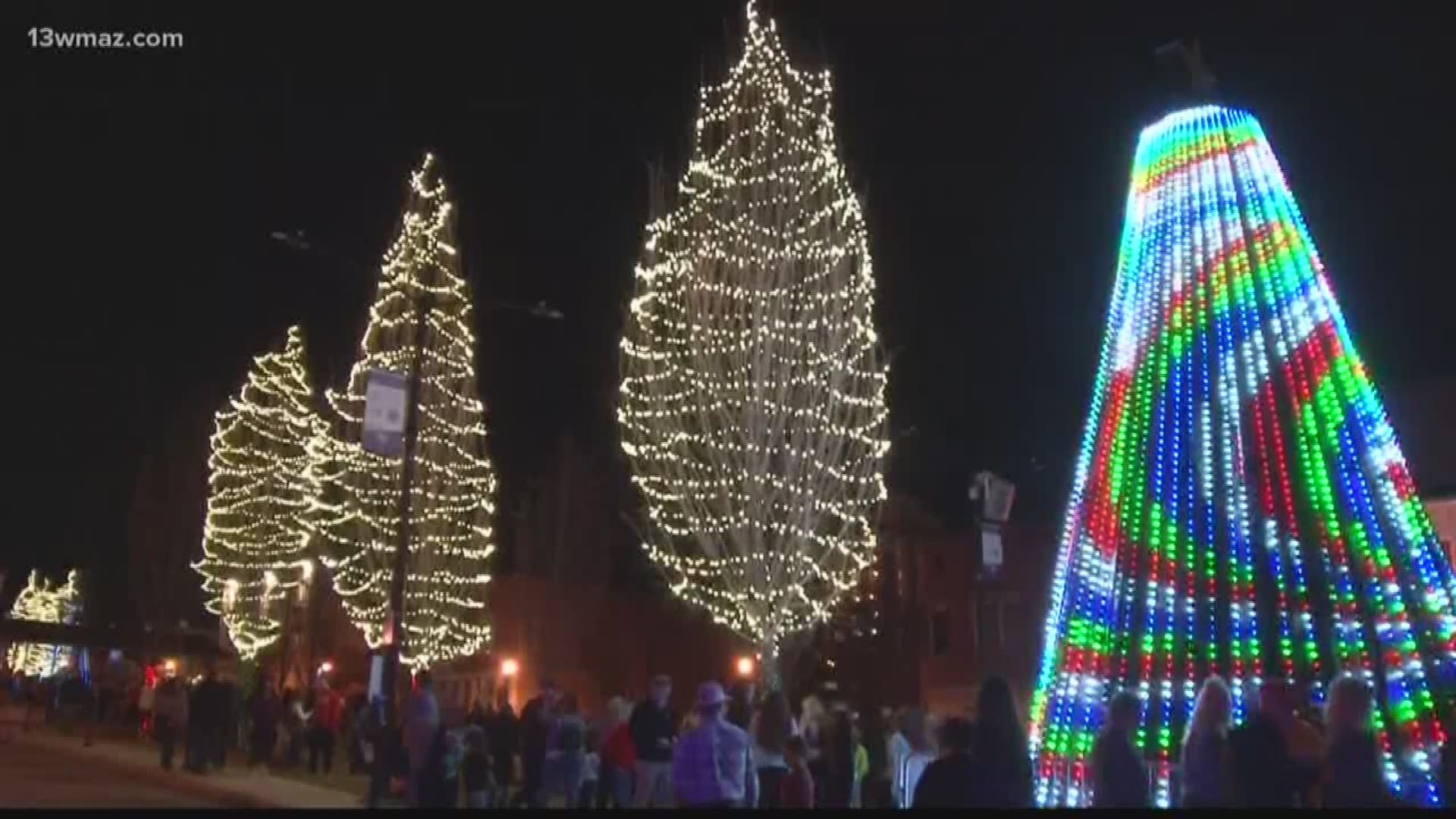 First, he worked around the more than 3,000 people the Macon Beer Fest brought to downtown. Then Halloween packed the sidewalks with thousands of trick-or-treaters.

Wednesday afternoon, Nichols was looping wires on the limbs during a rare lull in activity.

Throngs return Sunday for the Blossoms & Bacon Veterans Parade at 3 p.m. and celebration at Luther Williams Field at 4 p.m. A free Rodney Atkins concert follows at 6 p.m. and fireworks at 7:30 p.m.

As Nichols worked on a lift in the Poplar Street median, he said: “When I first started this, I didn’t have to worry about working around anything. There was nothing here, you know, it’s a great problem to have. It has changed.”

Beginning Black Friday, the Main Street Christmas Light Extravaganza, features a half-million brilliant bulbs dancing to Macon Pops music playing on four and a half city blocks. The lights draw about 400,000 people during the holidays, but organizers think it will be even more popular this year as people emerge from pandemic isolation.

With six new songs, Nichols is creating two nightly shows that will alternate hours between 6–10 p.m. from Nov. 26 until Jan. 2.

The very first light show of the season kicks off to live music at the Macon Pops Opening Concert at the corner of First and Poplar streets.

The art of Shopping Small

From her perch at Macon Arts Alliance, gallery assistant Karen Hix listens to the music during sound checks.

“It’s such a joy to hear and it really puts you in the spirit,” Hix told the November meeting of the Downtown Macon Community Association she chairs.

November’s art show at the gallery at 486 First St. launches the holiday gift-buying season with a showing of “Small Works” by several artists. The exhibit will be up from the First Friday reception until the end of the month.

All of the 50 paintings are less than 12 inches, which makes them perfect for unique presents, Arts Alliance executive director Julie Wilkerson told the board last week.

The Arts Alliance offers more gift-buying options from 40 artists at the annual Fire & Ice ceramic and blown glass exhibition and sale Nov. 12- 20 in the Round Building of Carolyn Crayton Park.

“Shopping local is one of the ways you can ensure your gifts are actually going to be in the hands of people you’re giving to,” Hopkins told downtown entrepreneurs.

Nov. 27 is officially known as Shop Small Saturday where merchants are expected to offer deals and incentives after the frenzy of Black Friday.

NewTown is sponsoring a scavenger hunt of sorts where shoppers will search for Shop Small stickers hidden in stores. Finding one enters you into a drawing for a $500 shopping spree.

“If they’re looking for the sticker, odds are they will find something as a gift for someone or something they’d like to purchase,” Hopkins said.

The Market, a seasonal open-air collection of vendors, holds its final event of the year Sunday, Nov. 21.  Instead of setting up exclusively in Addison Tinsley Park along the Poplar Street median, booths will be dispersed through downtown so shoppers can stroll the streets and be lured into stores and restaurants, Hopkins said.

Christmas Made in the South returns to the Macon Coliseum and Wilson Convention Center this Friday through Sunday.

After Travis Tritt in concert Nov. 4 at the City Auditorium, there’s plenty of other opportunities to hear live music at downtown venues in November.

On Saturday, Nov. 13, the Grand hosts the cabaret “Broadway Does Holiday” as the venue is not waiting until December to get into the spirit.

John Fogerty is in concert Nov. 17 at the City Auditorium and Jamey Johnson also plays there Nov. 27.

The Macon-Middle Georgia Black Pages also has been working with NewTown to encourage more minority participation with this year’s Bringing African Americans Downtown, or Project BAAD.

Along with the Rhythm N Jazz Foundation, the group will be at Cherry Street Plaza, between the Tubman Museum and Georgia Sports Hall of Fame, from 4-8 p.m. on Nov. 20. The event features food, entertainment, vendors and an opportunity for socializing.

Also that Saturday at 7:30 p.m., The Tribe Macon drag troupe presents its largest show to date at the Grand Opera House.

To learn more about activities in downtown, visit macon365.com.