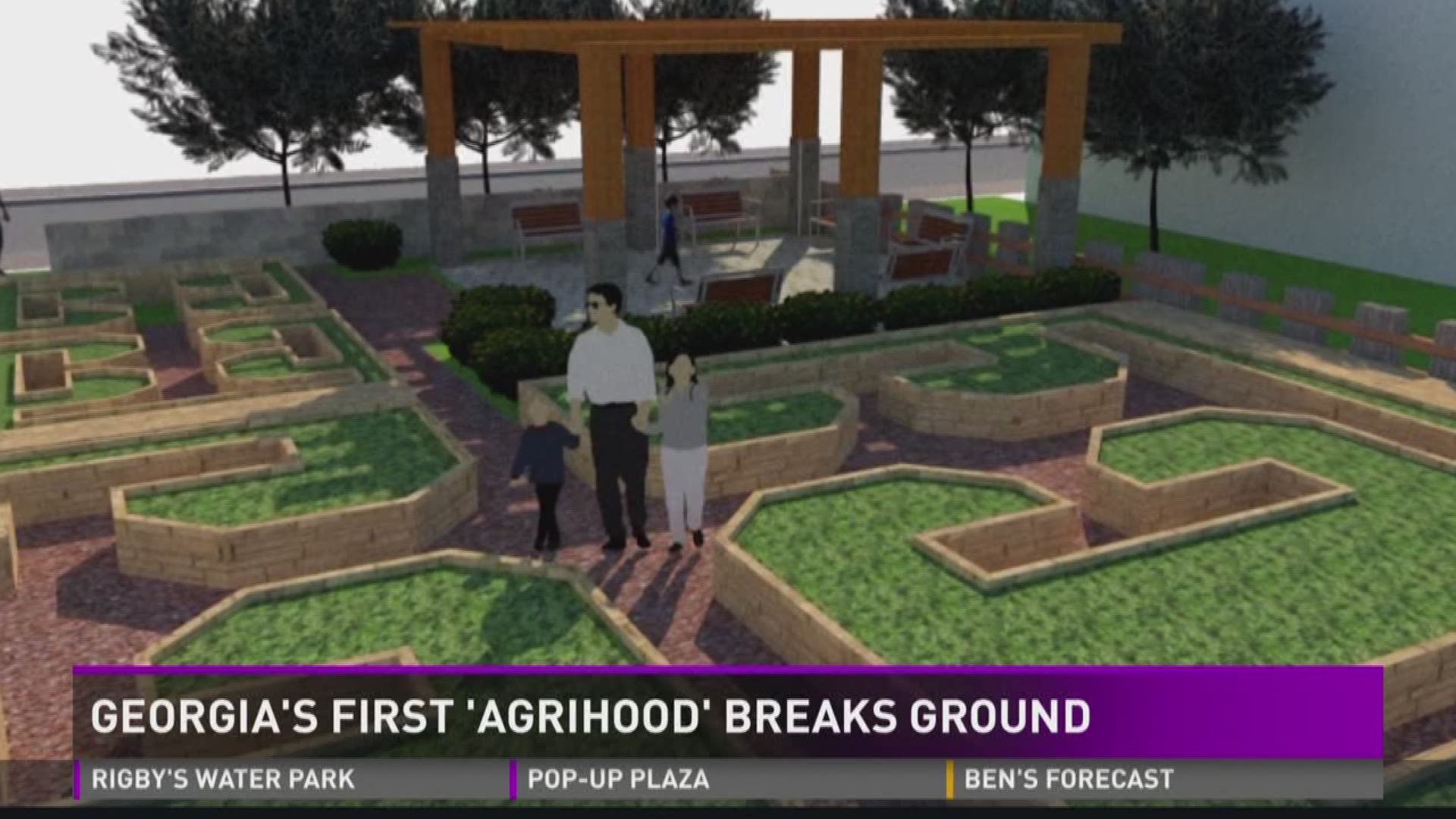 MACON, Ga. — Editor's Note: Video in this story is from the groundbreaking in 2017.

Philip Tutt has been looking forward to seeing his Southside neighborhood come back to life.

For years, the 83-year-old has been advocating to have blighted houses and eyesores removed from and around Bowden Street, where he lives.

In 2017, the promise of Georgia’s first agrihood, envisioned as a burgeoning community surrounding a collaborative garden, gave him hope. Now, after a $500,000 grant to create an oasis in a fresh food desert, all that remains is a dozen raised beds, some community portraits and dashed dreams on two plots of land.

“I had a lot of collards there and one night somebody came by and cut them all and took them,” said Tutt, who now tends the community garden by himself.

The failure rate for community gardens has the Macon-Bibb County Land Bank Authority updating its policy.

“Community gardens as a whole in the country last less than two and a half years,” said Everett Verner, executive director of the local land bank.

“Community gardens aren’t working these days, just so you know,” she recently told the board. “These community gardens, while they have honorable intentions on the front end… many of them fall into disrepair.”

Verner was enthusiastic about community organizer Danny Glover’s idea to build the “Gateway Heights” Agrihood in his grandmother’s neighborhood between Knott Street and Grant’s Chappell Alley.

When Glover applied for a half-million dollars from ArtPlace America, he asked Frank Austin to be his fiscal agent. Glover needed a 501(c)(3) and Austin not only had one, but had been lauded for building the Village Green Community Garden in 2014.

In that project, it later turned out Austin was gardening on land he did not own and was asked to cease, Verner said.

Verner and other community leaders embraced Glover’s plan to revitalize the declining neighborhood, provide healthy food and a sense of community. The land bank agreed to help Austin acquire property in Southside.

The goal was to convert eight parcels into a “multi-leveled, multiple use structure that will house a fitness center, community kitchen/food pantry, a healthy lifestyle type restaurant that uses the produce from the garden, at least 20 affordable apartments and other retail spaces…,” according to the plan.

Glover envisioned “MAC Village,” which stands for Music Arts and Culture Village. Images and inspirational words were painted on several of the empty houses although the center did not own them.

Under an agreement with the Frank Austin Center for Community Development, the land bank contacted property owners about selling the lots needed for the project. Ultimately, only two could be acquired and it took the authority much longer than the 30 days specified in the contract to collect its $1,000 service fee for the acquisitions. Afterwards, the land bank severed ties with the Austin Center.

Months after securing the grant money, Glover was working on the gubernatorial campaigns of Stacey Abrams in Georgia and Karl Dean in Tennessee. At the start of 2019, he left Macon to work on a mayoral campaign in Denver, Colorado. He says Austin “ghosted him” in March 2018.

“He completely cut off communication, stopped paying invoices and wouldn’t answer the phone,” Glover told the Center for Collaborative Journalism last year. “He cursed my dream.”

But Austin has accused Glover of abandoning the project. The CCJ caught up with Austin in May 2020 when crews were clearing land at the site just days before the final report was due to ArtPlace America.

“Danny and I haven’t talked in over a year,” Austin said in 2020. “This is Danny’s vision. This is Danny’s project. After now we have no plans of moving forward.”

Austin then hired Michael Riley as executive director of the center as they worked to complete Phase 1 of the project, which included acquiring and clearing more land and establishing the garden.

The preliminary budget included $10,000 for water and electricity but no irrigation system was installed.

Tutt, who grew up on a farm, pulls a 200 ft-long-hose from his property to keep the few remaining bunches of collard greens growing. He also keeps the grass cut around the planters at 681 Bowden Street and maintains his own bountiful backyard garden.

The second lot purchased by the center and its adjoining property were cleared in spring of 2020, but is now overgrown again.

“You need a bush hog back there,” Tutt said. “It just keeps growing.”

ArtPlace America in Brooklyn, N.Y., spent the past 10 years fostering creative placemaking that positions arts and culture in the core of communities. The $150 million collaboration of foundations, federal agencies and financial institutions shut down late last year and it’s not clear if the obligations were met for the $500,000 grant.

The Secretary of State dissolved the Austin Center in September, according to its website.

The report, filed on behalf of the Austin Smith Center for Development, says Glover was paid “$65,220 to carry out work such as community clean ups, clearing land, and prepping plots of land for construction. Michael (Riley) stated that none of the work was carried out.”

The alleged theft by taking complaint was answered about two months later with another report filed by Glover accusing Austin of using $385,000 of the grant money “for his personal gain.”

Both are active investigations, according to the sheriff’s office.

Verner and other community leaders once close to the project say the lack of follow through tarnishes Macon’s reputation for grant funders.

A quarter of the $500,000 was budgeted for salaries and a little more than that for land acquisition and the building.

Taking back the land

The land bank is a conduit for the county to take tax delinquent and abandoned properties, get them back on the tax rolls and occupied. If new owners fail to restore and maintain property, blight is perpetuated.

Woodford said it’s a problem, particularly in neighborhoods vulnerable to falling into disrepair.

“Then nothing happens and the property remains or returns to that blighted status,” Woodford said. “And then you have community residents that look at us and say, ‘Well, the land bank sold it to them and what now?’”

The authority now has a “right of reversion” in place that sets a time frame for new owners to accomplish what they committed to or the land bank can reclaim the property. It also applies to homes, not just gardens and vacant lots.

Rickelle Felton, of McDonough, came to the land bank a few months ago with plans for a community garden on Hall Street in Fort Hill. She put a Facebook group together and had wanted to pay tribute to her family by building the Leona H. Tripp community garden with the “common goal of becoming one with the earth while creating a farm-to-table experience for the entire community.”

“Community gardening is a bad situation and people lose interest in them,” authority member Bruce Gerwig said in the meeting.

“If this property is totally neglected, there’s still code enforcement,” authority member Tom Ellington replied. “I think all of us have seen things like Bruce is talking about where we’ve seen community gardens that were there for a while and then neglected.”

Felton gave pause when she realized she could lose the lot if she failed to maintain the garden two or three years down the road.

She rejected the terms of a right of reversion over three years, walked away from the deal and later criticized Gerwig and Woodford on social media.

Authority chairwoman Sylvia McGee thought Felton being the test case was a “little unfair,” but understood her colleagues’ passionate positions.

“We just passed something and we’re doing the best we can to ensure properties we extinguish taxes for are done justly and people do what they’re supposed to do,” McGee said.

Going forward, the authority will set varying terms for the right of reversion based on the project.

In Felton’s case, it was based on the statistic Verner shared about the failure rate of gardens within three years.

Looking back at the Agrihood situation, Verner believes it could have succeeded.

The proposal and design work were impressive.

“It’s a good plan but it’s a multi-million dollar plan and they got $500,000,” he said. “What happened here? That’s what I don’t know. People should get paid if they’re doing the work, but they didn’t do the work.”