991. That's how many seat belt citations Byron Police Department has given out just this year. 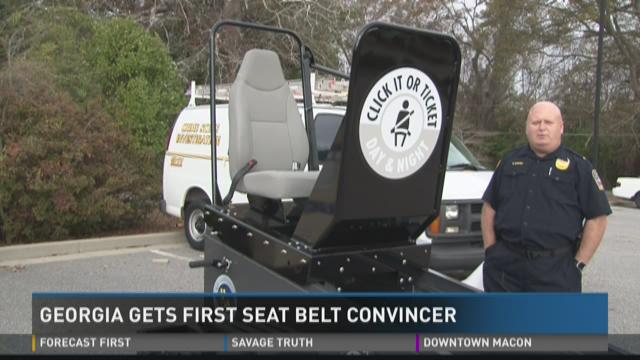 That's how many seat belt citations Byron Police Department has given out just this year.

Our Madison Cavalchire shows us how a new simulator could help teach people in Central Georgia to click it before they get a ticket.

“I always make them buckle up,” said parent Tristan Huber. “Even if it's just five minutes down the road.”

A simple click of a seatbelt is a familiar sound to many Georgia drivers.

“Well, I mean, you got to realize, back in the day, seat belts weren't mandatory,” said driver Jessica Kraus.

According to Byron Police Lt. Bryan Hunter, the department has given out 991 seat belt citations this year.

That’s where the Seat Belt Convincer comes in.

Hunter says the Governor's Office of Highway Safety gave the department $22,500 dollars to pay for the Seat Belt Convincer.

The simulator shows people how a seat belt could protect them during a car accident.

“We're going to take it to schools. We've got things planned, try and do one or two a month with this wherever we can get it, anywhere in the state,” said Hunter.

“It's just hard to get the older generation to do it, but if we can start with the younger kids, and get them to understand why they need to wear their seat belt, then we can save more lives,” said Hunter.

Riders will feel the same amount of force generated in a low-speed collision.

“I had a few good friends at one point, and I lost them because they weren't wearing their seat belts,” said Huber. “If they had, they’d still be here.”

The simulator is NOT for small children. Hunter says it's meant for kids and adults ages 15 and up.