Here is a look at some of the statements. 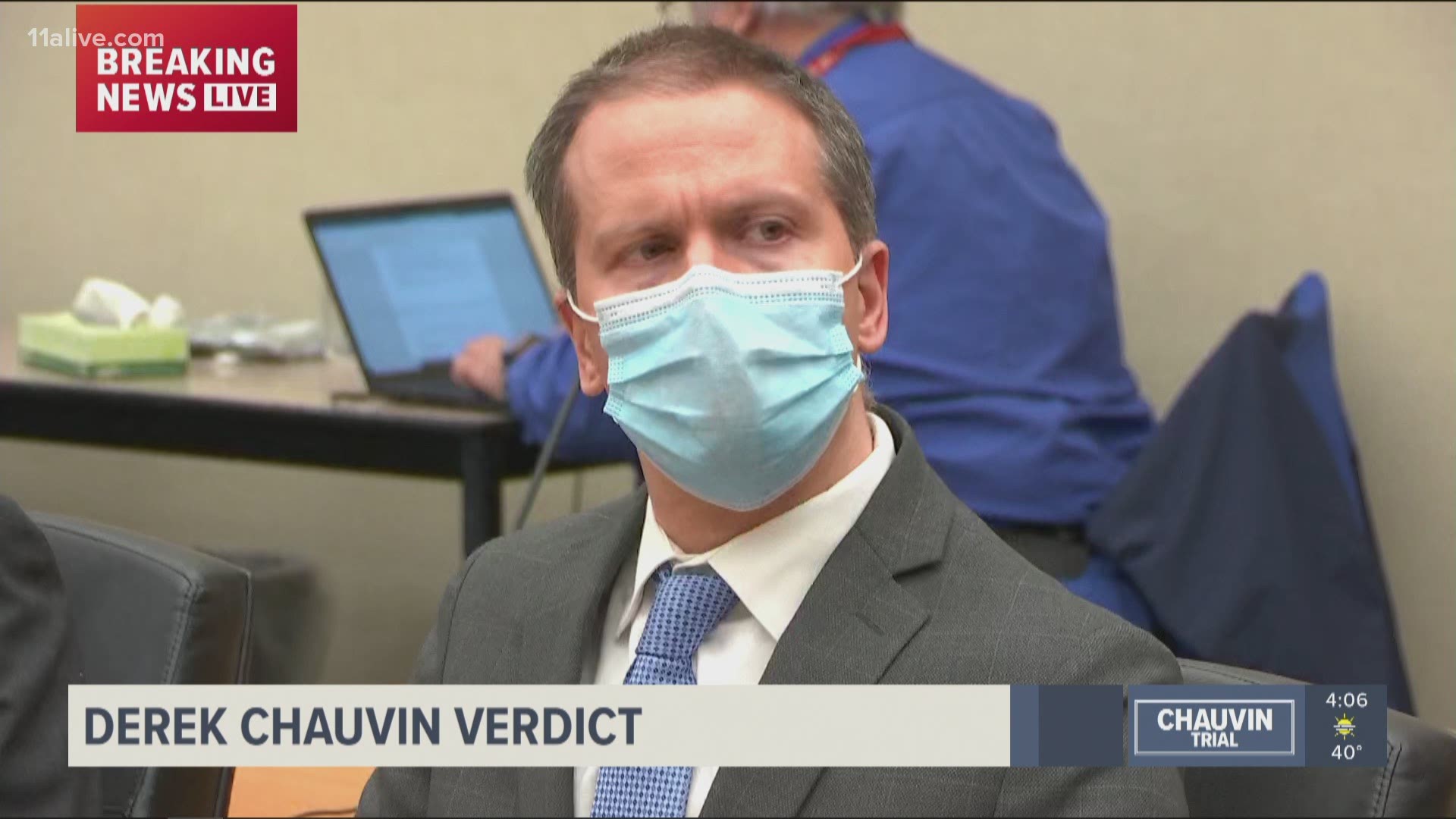 ATLANTA — The nation watched closely as a guilty verdict was read for all three charges in the Derek Chauvin trial for the murder of George Floyd.

These are some of the statements.

Last year, America and the world witnessed injustice with our own eyes. It is my hope yesterday’s clear verdict can begin to heal our communities and our nation. I join all Georgians in continuing to pray for George Floyd’s family and loved ones in their tragic loss.

The ACLU of Georgia:

“Across the state of Georgia people stood up and demanded justice for George Floyd. This verdict is an affirmation that democracy can be made to work. The impact of Mr. Floyd will be felt across our state in the new elected officials who were inspired to run on platforms of police and criminal justice system reform and the voters who marched from the streets to the voting booth and supported policy reform,” said Andrea Young, executive director of the ACLU of Georgia."

"No verdict will bring George Floyd back to his family," Rep. McBath tweeted. "May they find peace, and may we never stop fighting to prevent future injustices like the one which took his life.

No verdict will bring George Floyd back to his family.

May they find peace, and may we never stop fighting to prevent future injustices like the one which took his life. https://t.co/8dh9J60voP

Abdur-Rahman said "America is on the right side of history" with the verdict. Below is part of her station.

"While today’s verdict is a reason to have some joy, we must be vigilant in understanding that today is just the start of America beginning to regain its soul. How future cases pan out will determine whether redemption is fully realized," she said. "There must be no more George Floyd cases."

“While I am grateful that the verdict is guilty on all three counts, there is no verdict or punishment that will bring George Floyd back to his family. As tragedies have propelled our nation into a level of needed consciousness and action in the past, it is my sincere hope that the tragic death of George Floyd will forever be our reminder that the work towards reform, healing and reconciliation is not a one time event. We must continue this work if we ever hope to truly be one nation, under God, with liberty and justice for all.”

“Tonight, the family and loved ones of George Floyd can breathe a sigh of relief, knowing justice has been served in his tragic death,” said Congresswoman Bourdeaux. “Though there is comfort in knowing Derek Chauvin will be punished according to the law, this verdict will not bring back George Floyd. Nor will it erase any of the other instances of police brutality Black men and women have been forced to endure. Our work is not done, and in George Floyd’s name — and those of all who have suffered — we must march onward. Now it’s time to pass the George Floyd Justice in Policing Act.”

“Today begins the required change of a criminal justice system that has failed Black people for far too long. Thank you to the jury who stood on the right side of justice – making history! I am hopeful this is a turning point in accountability for police officers” Brown said.

“Today, justice has been served. The prosecution scored a slam dunk and the jury agreed. As prosecutor Jerry Blackwell said during closing arguments: ‘while some believe George Floyd died from an enlarged heart, he actually died because ex-officer Derek Chauvin’s heart was too small.’ While today we recognize that justice was served, one case will not change broken-taillight policing in Black and brown communities. We must continue our work to reform the police and pass the George Floyd Justice in Policing Act. As members of Congress, we must continue to advance reform of our criminal justice system and pass police accountability legislation. We must act now to halt the brutal injustice of police misconduct, the taking of lives, or George Floyd will have died in vain," he said.

He tweeted a statement saying Congress needs to pass "the Georgie Floyd Justice in Policing Act."

Today’s verdict affirming Derek Chauvin’s responsibility for killing George Floyd is the right outcome in this trial, but it is not justice.

Congress must pass the George Floyd Justice in Policing Act to help end this cycle of violence.

“I am grateful justice was served today. In the name of George Floyd and countless other victims, we must work to assure equal justice under the law for every one, every day," Bishop said.

“George Floyd's murderer has been convicted, but brutality and racial bias will persist in our justice system until we enact reform. I am urging my colleagues in the Senate to pass criminal justice reform that will ensure public safety, rebuild trust between communities and law enforcement, and secure equal justice for all.”