Nurses are seen playing computer games and sitting around as a man collapses multiple times and begs for help. 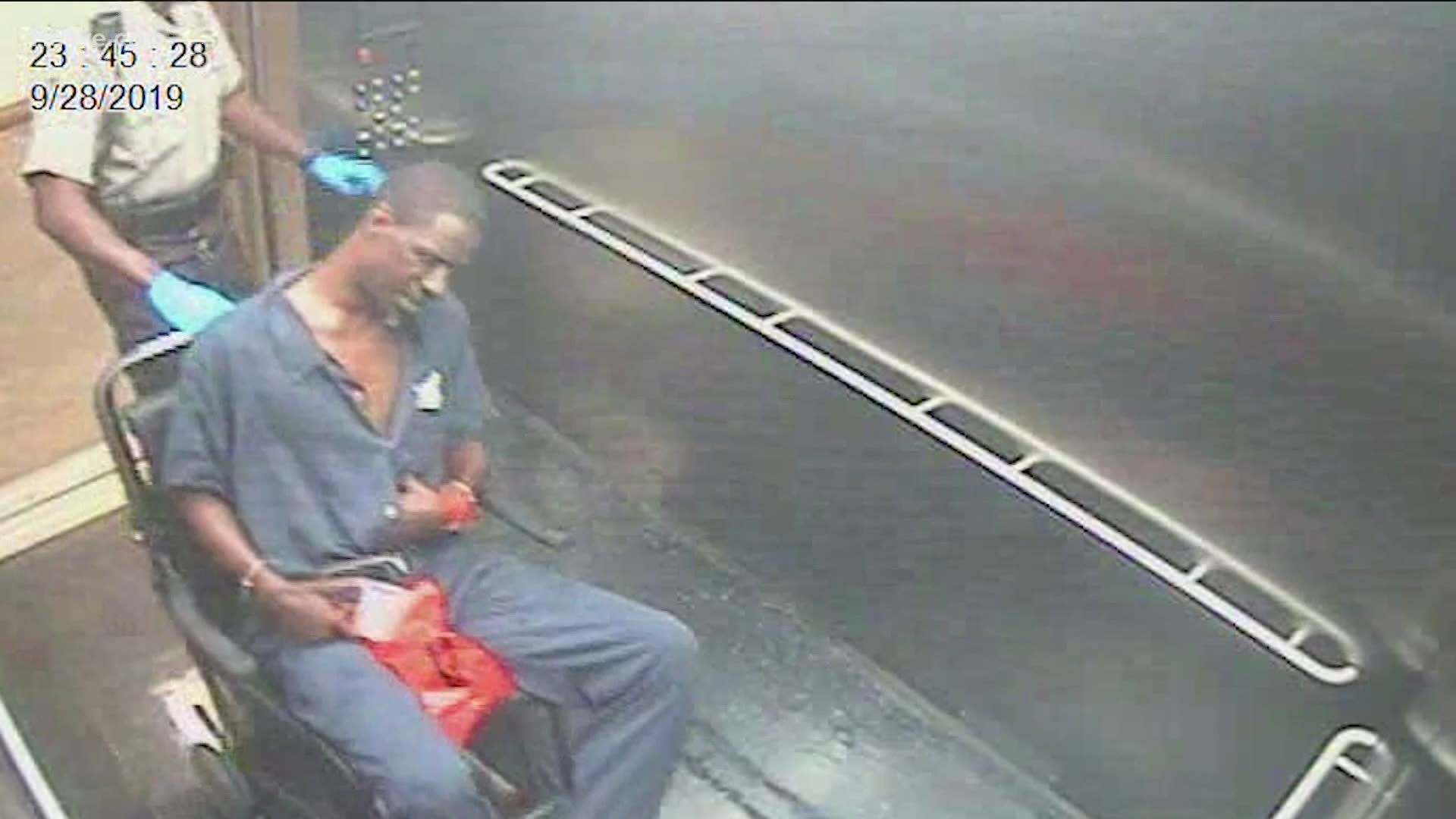 COBB COUNTY, Ga. — An expert with more than 20 years of experience managing correctional medical infirmaries believes nurses allowed an Atlanta man to needlessly die from a treatable condition while in jail custody.

On Monday, an 11Alive Reveal investigation exposed video of Kevil Wingo detained inside the Cobb County Detention Center in September 2019. He’s repeatedly heard by staff screaming he could not breathe, while deputies and medical personnel did little about it.

For more than seven hours on September 29, the 36-year-old father of three complained about abdominal pain and an ulcer. He begged staff to send him to the hospital. Instead, deputies and nurses sent him to a padded isolation room, where he was found not breathing an hour later.

When Claire Teske first saw video of Wingo begging for help, she felt confident he was not faking his pain.

“This guy was a walking time bomb and they put him in a cell and left him there. That’s pretty disturbing,” said Teske, a registered nurse with 40 years of experience, half of it while managing multiple medical units inside California county jails.

RELATED: 'I can't breathe': Man dies in custody after hours of begging for help

Just before midnight on September 28, jail video shows Deputy Quintin Appleby transferred Wingo to the infirmary in a wheelchair. Wingo told Appleby he believed an ulcer was to blame. “He was saying, ‘I’m not going to make it. I’m about to fall out the wheelchair,’” said Appleby.

The deputy then relayed the information to the infirmary nurses, who believed Wingo was detoxing.

At the time, the jail’s infirmary was run and staffed by WellStar Health System, based out of Marietta, Georgia.

While watching the video, two other issues caught Teske’s eye. She saw a nurse playing card games on the computer for hours while Wingo pleaded for help. She also noticed none of the medical staff responded to Wingo when he collapsed outside his cell, lying on the ground for nine minutes before a deputy picked him up.

"Nurses were sitting back behind the desk, three of them sitting there. Not one of them got up and went around to make sure that man was okay,” said Teske. “I wouldn’t have an employee like that.”

Teske said what she witnessed went beyond the standard of care.

“His rights were violated. He wasn’t cared for properly at all,” she said.

For nearly two years, 11Alive has reported about other deaths at Cobb County’s Detention Center and the public’s outrage that followed.

Since June 2018, at least seven other men and women have died while in custody at the jail.

One of them includes Reginald Wilson, who was found dead in his cell on December 29, 2018. The Cobb County Medical Examiner's Office said he died of dehydration due to bipolar disorder and listed the cause as natural.

In a lawsuit filed by Wilson's family, they claim jail staff failed to provide Wilson proper medical care during the nine days he was at the jail. Cobb County Sheriff Neil Warren, WellStar Health System, as well as several deputies and medical professionals, are listed as defendants.

The lawsuit claims a nurse noted Wilson suffered from bipolar disorder and acted bizarre. During his time as an inmate, several others noted Wilson showed signs of psychosis. The family’s attorney claims at no point did the jail psychiatrist see Wilson.

The lawsuit also alleges that while in custody, Wilson smeared his own feces around his cell and did not eat or drink.

"The defendants entirely failed to provide him with adequate supervision or care during this time," the lawsuit alleges. "Instead, they merely documented his downward spiral until his death."

In December, ACLU Georgia organized a town hall meeting for families and former inmates to voice their concerns about the jail. During the meeting, some people described the conditions as unsafe and inhumane.

“These are people. We have to make sure that no matter what has happened [or what they have done], we treat the least of these to the best of our ability. Because that’s what we’re judged on, as people," said Chris Bruce with the organization.

At the time, Sheriff Neil Warren defended inmates’ medical care and his staff’s commitment to caring for them.

“All deaths are tragic,” Warren wrote in a December 2019 statement, “and I take the responsibility to care for those housed at the adult detention center very personal. I find it heartbreaking that people have attempted to capitalize on this tragic loss of life. The false statements surrounding these sad situations in order to inflame the public for either financial or political gain needs to stop.”

The sheriff has asked Marietta attorney Nathan Wade to review complaints involving the department’s use of force, allegations of neglect and discrimination. Wade said his firm is not getting paid by the department, but the sheriff has promised him access to the records he needs to conduct a thorough review.

Wade is a former prosecutor and is now in private practice. A timeline to complete his review is not known.

After this investigation aired Monday, Cobb County Chairman Mike Boyce sent 11Alive a statement saying what happened to Wingo was "unacceptable," and more should have been done by medical staff.

"It is my hope that the Board can work with the Sheriff’s Office going forward to ensure the current medical contractor has procedures in place to provide the best care possible for inmates," said Boyce.

Calls for a Criminal Investigation

On June 12, the Cobb County Sheriff’s Department concluded its investigation into Wingo’s death. It found no one committed a crime or violated any jail policy. The report did not recommend disciplinary action taken on any employee.

The medical examiner ruled Wingo’s death natural, caused by a perforated gastric ulcer. Lab tests did not find illicit drugs in his blood.

The law firm representing the Wingo family has requested a criminal investigation into his death. Their attorney, Timothy Gardner, said he mailed letters to the district attorney and to the governor pushing for an outside investigation.

Tuesday, Cobb County District Attorney Joyette M. Holmes told 11Alive she received information from the attorney and "will review it."

"There are too many cases that are so familiar to Mr. Wingo’s case that it’s long over-due and the spotlight and attention to the Cobb County detention center needs to be shined bright and a thorough investigation needs to be had,” said Jeriene Grimes, the president of the Cobb County NAACP.

Cobb County Commissioner Lisa Cupid, who is running against Boyce in November, has also reacted to the investigation. She sent 11Alive this statement calling for a criminal investigation.

"It is hard to believe that Wellstar’s admission absolves the Sheriff’s office from ensuring their policies, practices, and partnerships with vendors keep detainees alive. Kevin Wingo’s death is one among others to have occurred within the Sheriff’s custody and it begs the question of how many others have fallen and will fall without the the office committing to do anything about it. Such lackadaisical response seems to warrant investigation, or third-party, objective review of practices to keep detainees alive and ensure justice is fully being served on behalf of all here in Cobb County," said Cupid.

“This is a county that has a reputation that if you are of an ethnic background, don’t get caught in Cobb County," Grimes said.

Nearly three hours before Wingo’s death, two infirmary employees were so concerned with Wingo’s health, they asked the charge nurse to take his vitals. The nurse said no.

That nurse believed Wingo only wanted to go to the hospital because he wanted pain medication. At the time, Wingo was in custody for drug possession.

“I mean, you watch that video and it’s the most heartbreaking thing I’ve ever seen," Teske said.

Medical experts said correctional nursing is one of most challenging roles in the medical profession. In a single day, a nurse working in a jail can treat someone with immune deficiencies, like AIDS, to broken bones and mental health challenges.

Their patients are often accused of violent crimes and include the population’s sickest because they lack health insurance to treat chronic conditions.

According to the Urban Institute in 2013, only about “9 to 30 percent of corrections costs can go toward inmate health care."

The institute went on to say, "this decreases the number of employees prisons can dedicate to inmate health, decreases their pay, and creates limitations on the availability of proper supplies and technology needed for necessary care.”

While historically underfunded, inmate medical care is still a large portion of the budget. Cobb County’s new contract with WellPath is about $9 million a year.

Teske admits nurses working in jail conditions can easily get cynical. It’s not uncommon for inmates to lie to go to the hospital. To avoid mistakes, she said, it is important for medical staff to look for what she calls ‘differential diagnoses.’ “You’ve got to figure out what’s not wrong and narrow down what is wrong,” said Teske.

She said based on her review of Wingo’s case, the nursing staff at the Cobb County Detention center never did that.

“He wasn’t checked thoroughly. It’s like he said, ‘I have abdominal pain, I’m vomiting, I’m nauseated and I have an ulcer.’ And they went, ‘So what?’" explained Teske.

11Alive provided WellStar with a copy of its findings and video associated with Wingo’s death nearly three weeks before publishing its story. The hospital system declined to provide anyone to interview.

In an email to 11Alive on August 3, the company claimed it wasn’t aware of the full circumstances involving Wingo’s death until 11Alive sent it to them.

“Although we ceased our operation at the detention center earlier this year, we will move swiftly to investigate all of the facts, which will include a review of the autopsy report and medical file, review of the investigation conducted by the Sheriff, and any other relevant information about the care and death of this patient,” wrote a WellStar spokesperson. “What you shared with us last week, both in the edited video and in your email, is deeply concerning and does not reflect our values or how we care for patients."

"While there is more to do and we continue to review the facts and circumstances surrounding Mr. Wingo’s death, it is clear to us now that more should have been done to assist Mr. Wingo at the detention center, including from members of the WellStar’s Detention Center team directly in charge of his medical care,” said a WellStar company spokesperson in an email on Aug. 15. “What we have seen and learned of Mr. Wingo’s experience at the Detention Center is heartbreaking and unacceptable.”

This past May, WellStar stopped providing medical staffing for the detention center after more than 20 years. WellPath, LLC took over the jail’s infirmary shortly after.

11Alive has asked WellPath and the sheriff for the employment status of the nurses worked in the jail infirmary the night Wingo died. The sheriff's office declined to provide the information. WellPath, which confirmed it has reviewed some of the video, has also declined. A company spokesperson says it was unaware of the Wingo's death until this week.

MORE FROM THE REVEAL