Georgia continues to see a rise in cases ahead of the Thanksgiving holiday. 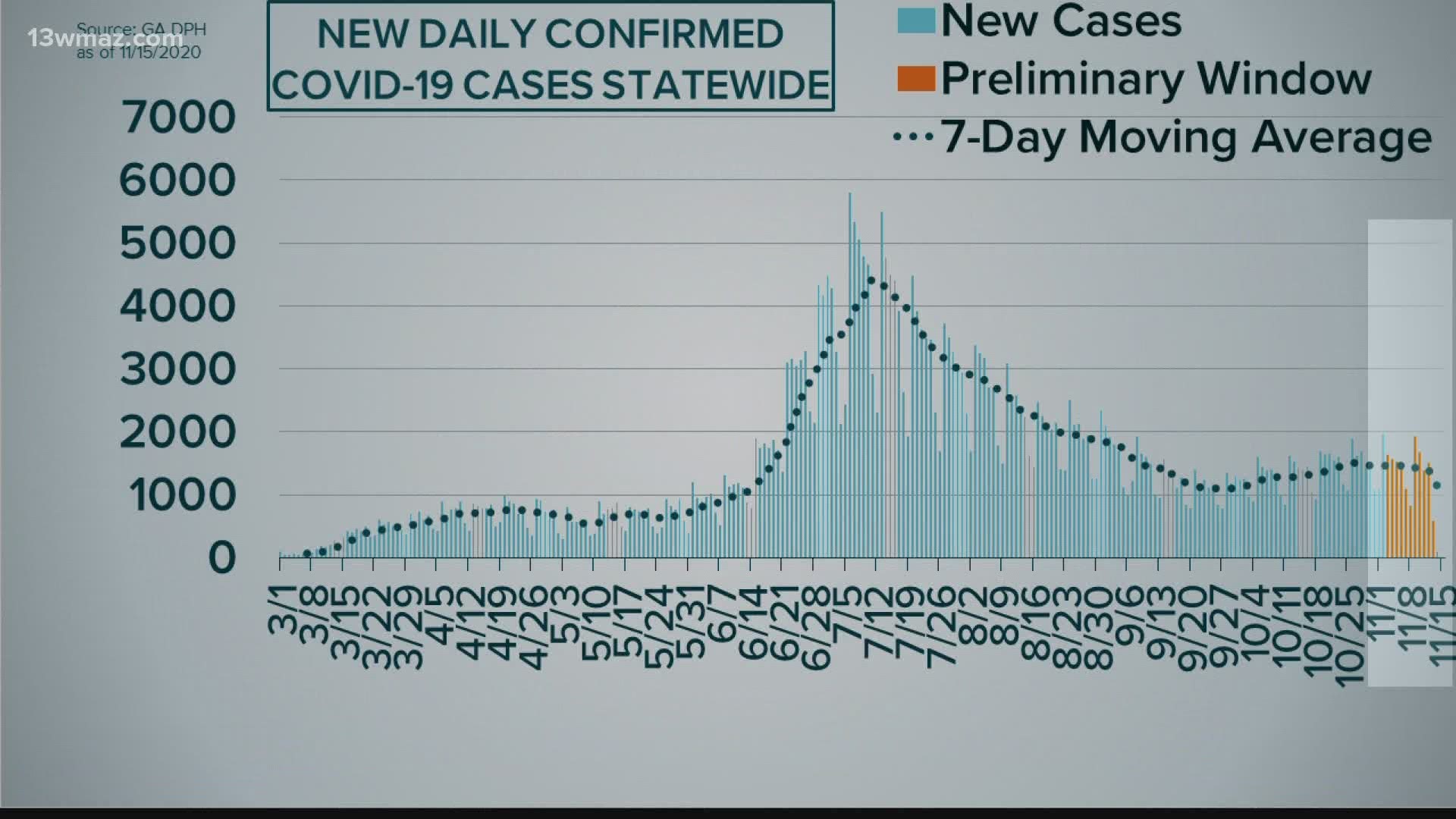 MACON, Ga. — Georgia's COVID-19 case curve continues to climb. It is a trend that dates back to the end of September.

While the trend line almost starts to level off and even slightly decrease as you look into the preliminary data window, it is important to remember tallies for these dates and even some right outside this time frame are likely to increase as the state receives and counts more test results.

Right before the preliminary data window, the state averaged 1,463 new cases a day. That is significantly less than the peak of more than 4,400 new cases in July, but it's more than three times higher than at the end of March when the state initially banned large gatherings.

This comes as health experts urge people across the country to still limit spending time with large groups, even during the upcoming Thanksgiving holiday, to prevent a spike in cases.

Houston County's numbers are also more than three times higher than at the end of March, though the county did see a significant drop-off recently after a steep increase last month. Since that decline lands right outside the preliminary data window though, there could still be some changes to these numbers in the coming days.

Before the preliminary data window, Houston and Bibb counties both averaged around 17 new cases a day.

However, Bibb's numbers are nearly six times higher than they were at the start of the ban on large gatherings in March. The most recent data doesn't point to any strong trends in Bibb, but numbers in the preliminary window are likely to increase.

Meanwhile, Washington County has the fourth highest spread rate in the state after a nursing home outbreak. Numbers also show some increase in Dooly,  Monroe, and Peach counties.

Hospitals across the state continue seeing a rise in new COVID-19 patients,  averaging about 110 a day compared to 93 new patients a day two weeks before. As of Monday morning, leaders at Navicent Health report 42 COVID-19 patients. That is compared to numbers in the twenties and thirties a month ago.

Credit: WMAZ
Deaths tied to COVID-19 in Georgia appear to be declining.

Deaths tied to COVID-19 appear to be dropping slightly, though there are a lot of ups and downs toward the end of the data curve with no strong trends. The state still averaged 20 deaths a day right before the preliminary data window.