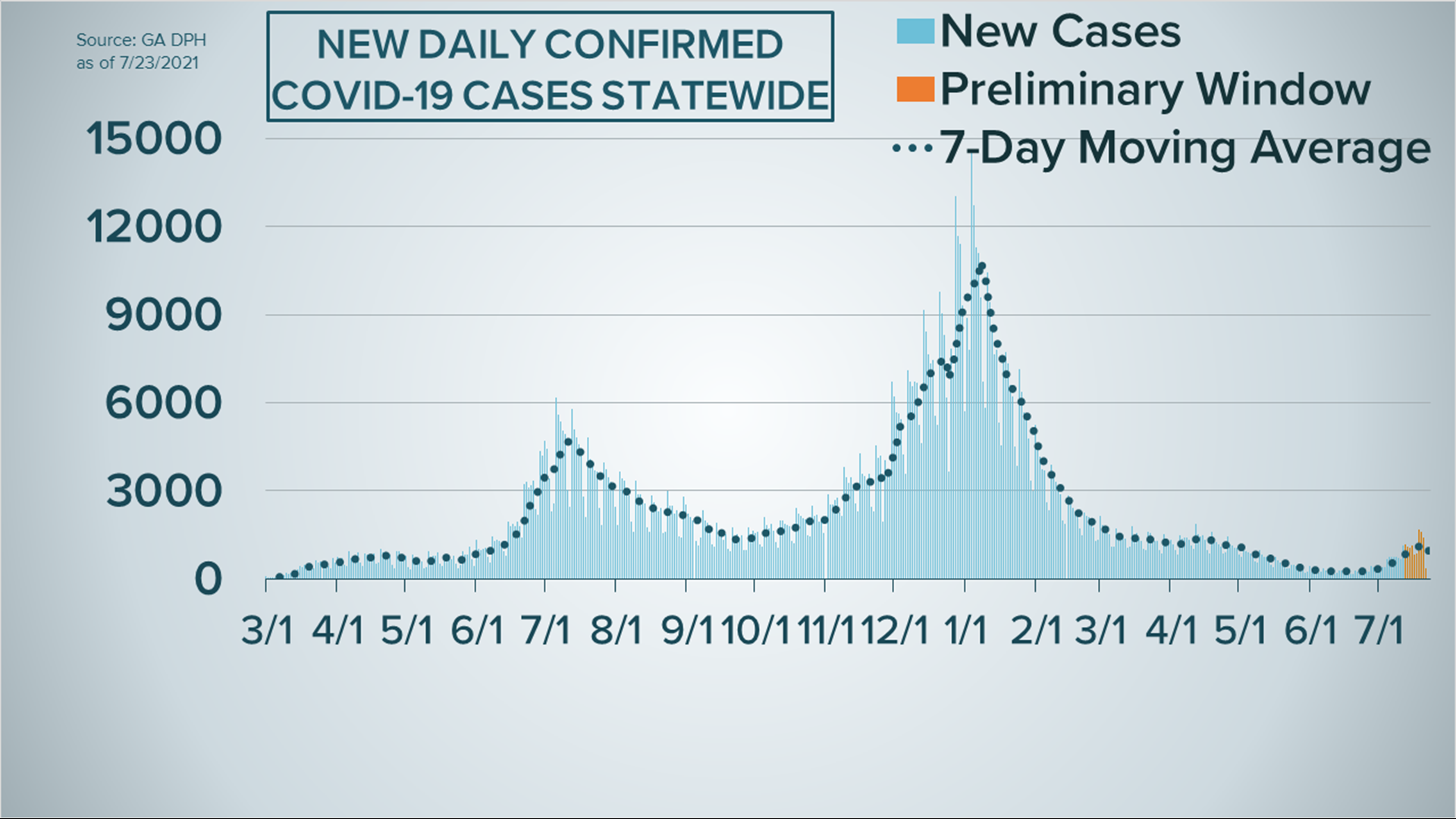 MACON, Ga. — As COVID-19 cases rise across the country, some Central Georgia counties are now reporting case numbers nearly 12x higher than a month ago.

Last month, the state dropped to an average of fewer than 250 new cases a day. Within a month, cases more than tripled to 780 right before the two-week preliminary window.

Cases continue to climb within that window, already hitting more than 1,200 new cases a day by last week. The state is still collecting results from the preliminary time frame, so we typically see those tallies go up.

Using the 1,200 case preliminary tally, Georgia's average is already 1.5x higher than the initial peak in April 2020, but cases are still significantly lower than the peaks in July 2020 and in January 2021.

In Bibb County, numbers already climbed to about 29 within the preliminary window. That's more than 9x higher than a month ago and almost double the initial peak in April 2020. However, this is still well-below the peak in January.

Both Bibb and Houston County's averages sit at about the same levels as June 2020.

Houston averages about 24 cases a day, which is 12x higher than last month when the county only added about two new cases a day. Houston's average now sits about 3.5x higher than in April 2020 when the state's shelter-in-place order took effect.

Credit: WMAZ
Even as case numbers rise, COVID-19 deaths have been steadily dropping since February.

Even as cases rise in the state, deaths tied to the virus continue to drop.

Right before the preliminary data window, the state averaged fewer than four deaths a day. That is the lowest since the very beginning of the pandemic and a major improvement from the 128 deaths a day reported at the high point in January.

Credit: WMAZ
Hospitals saw a quick rise in new COVID-19 patients, but that soon dropped to less than 50 new patients a day.

Hospitals did start to see more COVID-19 patients at the beginning of this month, climbing from 30 new patients up to more than 70 in less than three weeks. That was the highest since May. That number has started to drop again down to less than 50 new patients a day right now.

VERIFY: Yes, private employers can mandate getting the COVID-19 vaccine