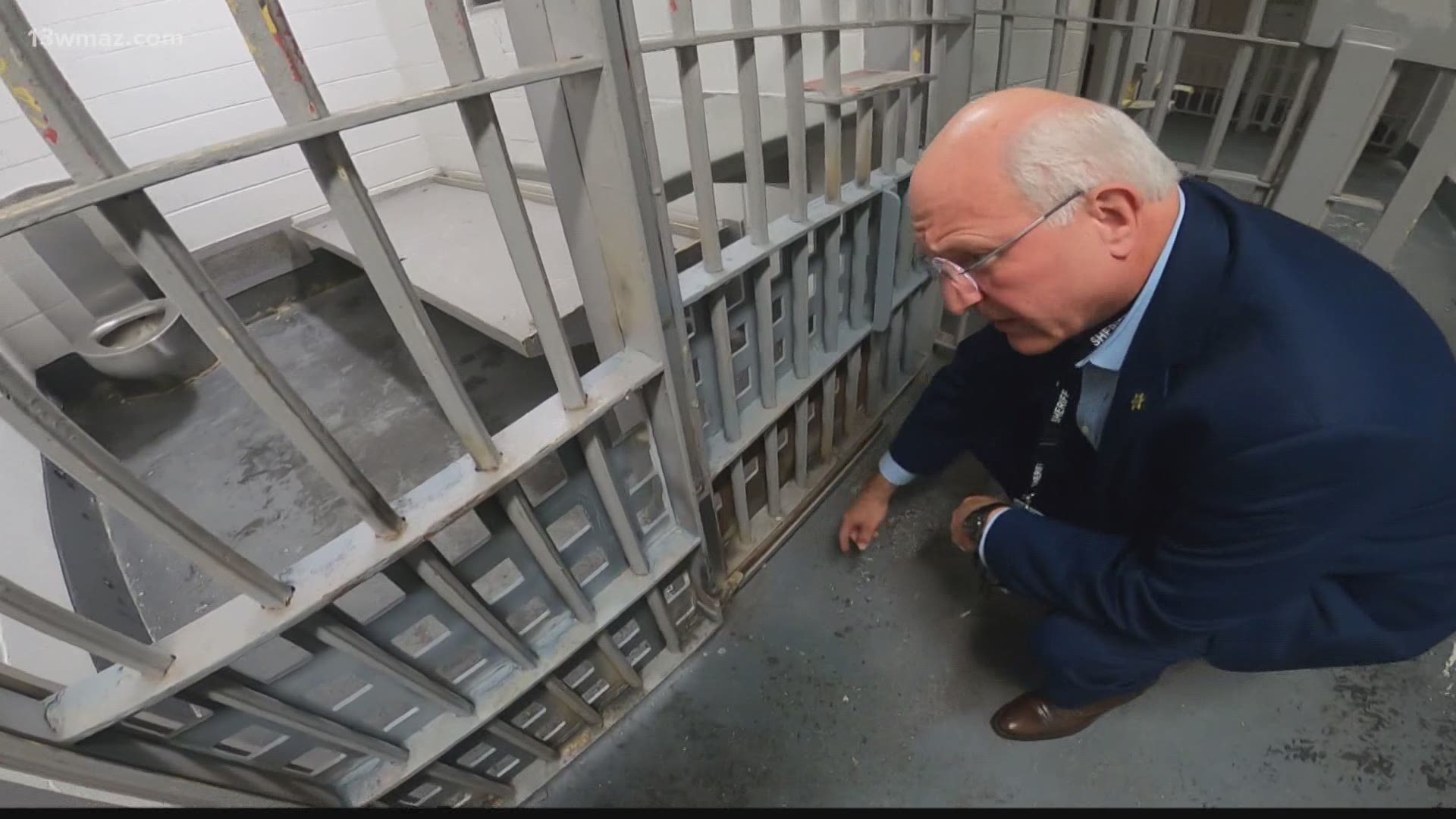 MACON, Ga. — Editor's Note: Video is from previous coverage on jail security, which is mentioned later in this story.

City Auditorium contractors are struggling to balance a grand wish list against necessities required in a $10 million renovation of the nearly 100-year-old building.

Last year’s unveiling of plans for a new glass lobby vestibule brought rave reviews, but the up to $6 million estimate for that addition has shattered expectations for the new design.

Necessary upgrades to the 1925 building’s aluminum wiring, fire safety measures and replacing the heating and cooling system will eat up much of what has been budgeted from SPLOST collections.

“Unless we find money from the courthouse, the grand scheme is probably not as grand as we had hoped,” Murphey said.

Mayor Lester Miller inherited the current SPLOST timeline from the prior administration and is looking at the necessity of future SPLOST allocations -such as nearly $40 million dedicated to building a new courthouse and parking deck.

When balancing $280 million in penny tax collections over 10 years, changes are expected.

At their last meeting, the Macon-Bibb County Commission approved the 31st amendment that shifted timeline expenditures totaling just over $19 million.

“That’s not too bad over the course of about five years, so it’s really not too bad,” Murphey told commissioners before the vote. “A lot of these are driven by opportunities we have, some requirements we have.”

One of the adjustments shifts nearly $7 million, allocated in 2022-2023 for the courthouse parking deck, to 2025-2026 when construction of a new building originally was budgeted to begin.

Commissioners moved to this year more than $3 million from the future courthouse and parking deck projects to acquire nearby real estate.

The county is buying the brick building at 688 Walnut Street and adjoining parking lot at 236 First Street.

“The building won’t be torn down,” Macon-Bibb Chief Communications Officer Chris Floore stated in a response to an email inquiry. “We will be moving some offices into there. Buying this building doesn’t stop the need (for) courthouse improvements and more space.”

Miller is expected to move some county departments into that corner building while he evaluates the future courthouse needs and desired safety upgrades.

To balance the cash flow on the timeline, commissioners also agreed to delay spending nearly $1.8 million from 2023 until 2026 for improvements to the Grand Opera house that are expected during the work on the courthouse.

The urgent need to repair cell doors in the Bibb County jail triggered some of the other shifts in spending. More than $1.5 million in SPLOST public safety funds will go toward ongoing work making the cell doors tamper resistant to keep inmates from jamming the locking mechanism.

Sheriff David Davis told commissioners he was able to keep costs under the $3 million projected earlier this year to not only fix the doors, but make other improvements suggested by the Grand Jury.

The commission also earmarked nearly $4 million for Macon-Bibb’s portion of purchasing rights-of-way for the future widening of Forest Hill Road from Wimbish Road to Vineville Avenue.

Murphey said funds pulled from 2026-2027 accounts, plus money left over from Sardis Church Road construction or originally earmarked for work on Sgoda Road, will be pooled with funds from the Georgia Department of Transportation to purchase land for the Forest Hill project.

Commissioners also agreed to transfer a little more than a million dollars from the completed Sardis Church Road project and previously planned work at Sgoda Road. That money will now build sidewalks on Pinehill Drive and Jeffersonville Road, which is in the middle of a widening project.

Commissioner Elaine Lucas has been advocating for pedestrian safety improvements in east Macon for years.

In recent months, Lucas has requested sidewalks on Old Clinton Road where 65-year-old Irene Stubbs was found dead lying in the road in July.

From 2027 Local Maintenance and Improvement Grant funds, $200,000 has been earmarked for Old Clinton Road sidewalks in this budget year.

To be competitive in recruiting softball tournaments, more than $500,000 from 2027 will be moved up to this year to expand and complete softball fields and install new lighting at Carolyn Crayton Park.

“A softball tournament will bring a lot of people to Macon,” SPLOST Advisory Committee Chairman Theron Ussery said at the last meeting.

Blight funds of $85,000 for 2022 will be spent this year to pay for River Edge’s management of the Train Center restoration at First and Oglethorpe streets, which will house UGA Extension offices.

Another $100,000 from next year’s blight remediation will be moved to this year to complete renovations at Mattie Hubbard Jones Park.

“That’s going to make a lot of people happy,” Macon-Bibb Mayor Pro Tem Seth Clark said of the long-awaited completion of that project.

Although there was concern about sales tax collections at the start of the pandemic, Murphey had a good report for the commission.