'We will endure': Gov. Kemp highlights resilience during pandemic, sets eyes on the future

Kemp called on Georgians to "put differences aside" and leave 2020 in the dust, saying what matters now is taking the next steps to end the pandemic. 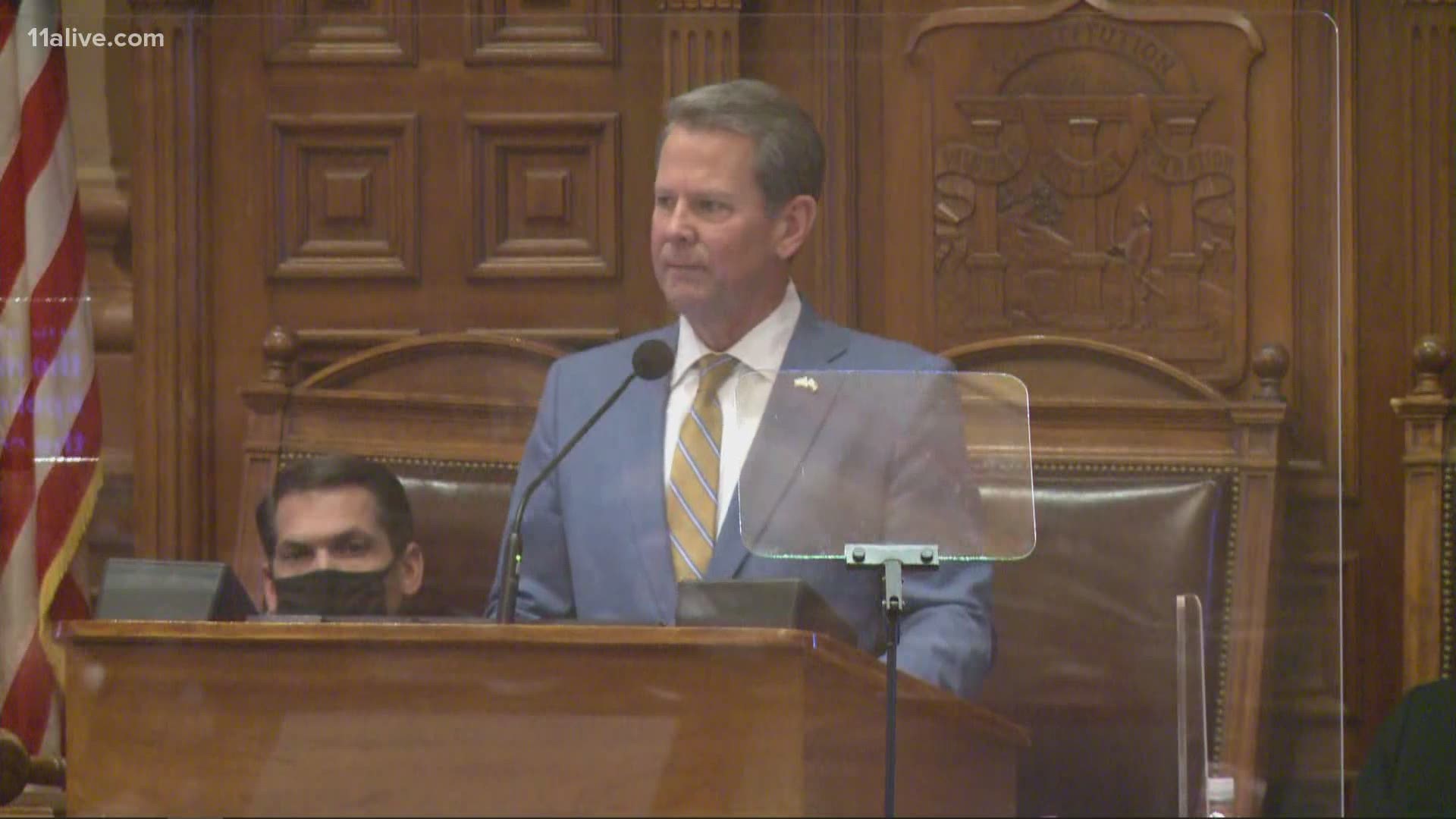 ATLANTA — Gov. Brian Kemp delivered his 2021 State of the State Address before the General Assembly on Thursday morning.

Kemp began by talking about the economic difficulty the state and Georgians have faced since the beginning of the pandemic.

He said Georgia “didn’t know the challenges ahead,” but has continued to persevere through the tough times in the spring and summer.

The overall message was one of resilience and hope as he highlighted the various ways the Georgians have slowed the spread of the virus and the state has met the unforeseen challenges head-on.

He retold the stories of how the state purchased four mobile hospital units, brought in additional bed capacity and praised the efforts of the National Guard and essential workers.

He said because of around-the-clock efforts, the state now has at least an 80-day supply of all critical PPE.

An additional $70 million is planned through early March through the CARES 2 Act to give nursing homes and hospitals some relief.

Kemp said thanks to the efforts of Operation Warp Speed, the vaccine is being administered, with over 283,000 Georgians vaccinated as of Wednesday.

“These have been dark times,” he said. “We have overcome so much.”

Kemp said Georgia earned the title of number one state for business based on how quickly the economy has bounced back.

He said the unemployment rate in Georgia sits at 5.7%, which is lower than the national average. In the midst of the pandemic, Georgia has “shattered record after record.”

Last year, for the first time in the state’s history, the General Assembly enacted a statewide public health state of emergency.

“I know that decision was not made lightly,” he said.

Kemp then moved on to what he plans to include in the budget.

He said he is also including $20 million for the fiscal year and $10 million per year moving forward to “boost access to rural broadband grants... to improve internet access for the people of rural Georgia.”

With the passing and signing of over 50 healthcare bills, his administration cut costs for better healthcare coverage. According to Kemp, the state has one of the highest uninsured rates in the country, which he called “unacceptable.”

He also proposed $76 million to implement Georgia pathways and access to make healthcare “accessible” and “affordable.” He said they will also make use of state resources, with $329 million for Medicaid and Peachcare to fund projected costs in 2021.

“We’re putting our money where it truly matters,” he said.

Another investment Georgia will make is in education. Last year, the state allocated $30 million to “advocate student connectivity” and $19 million to support childcare for working parents.

Kemp says educators have “gone the extra mile.” Working closely with Superintendent Richard Woods, the state will provide support for schools reopening with a one-time bonus of $1,000 per teacher and other employees.

For the amended budget, Kemp recommended $647 million to “restore funding to school systems across our state” and $573 million to continue efforts in next year’s budget.

“Those funds mean schools will be able to prioritize students' safety, ensure quality instruction continues and stand with our educators,” Kemp said.

He said COVID-19 has had a “negative impact” on colleges and universities. Those hit hardest by the pandemic were schools for minority students. So, with $5 million, Kemp plans for a program through the University of Georgia to keep 10,000 juniors and seniors enrolled in college.

Kemp mentioned the deaths of Ahmaud Arbery and George Floyd, saying violence against people of color “has no place in our state.” By passing hate crime legislation, Kemp said they reaffirmed Georgia’s commitment to value everyone in the state.

“We can again send a clear message. Georgia is a state that protects all of its people,” he said.

Kemp said peaceful protests were made possible by law enforcement, and reinforced that Georgia “backs the blue.”

He ended his address with this statement:

“As I come before you today, my memories of 2020 will not just be the struggles, the many challenges I spoke about today… I will remember time spent with my family, that otherwise would not have been possible… I will remember the countless sacrifices and hardships faced by the people of our state, and how we pulled through, how we weathered the storm, how we emerged resilient and stronger than ever… My fellow Georgians, we have the opportunity and responsibility to make strategic decisions now that will impact generations to come. We have the opportunity to act and accomplish what we were sent here to do... It's time to put differences aside, put 2020 in the rearview. Let's stand together as Georgians and clear the destruction caused by the storms of life. Let's clear away these conspiracy theories and the division. Let's focus on the bountiful harvest to come.” 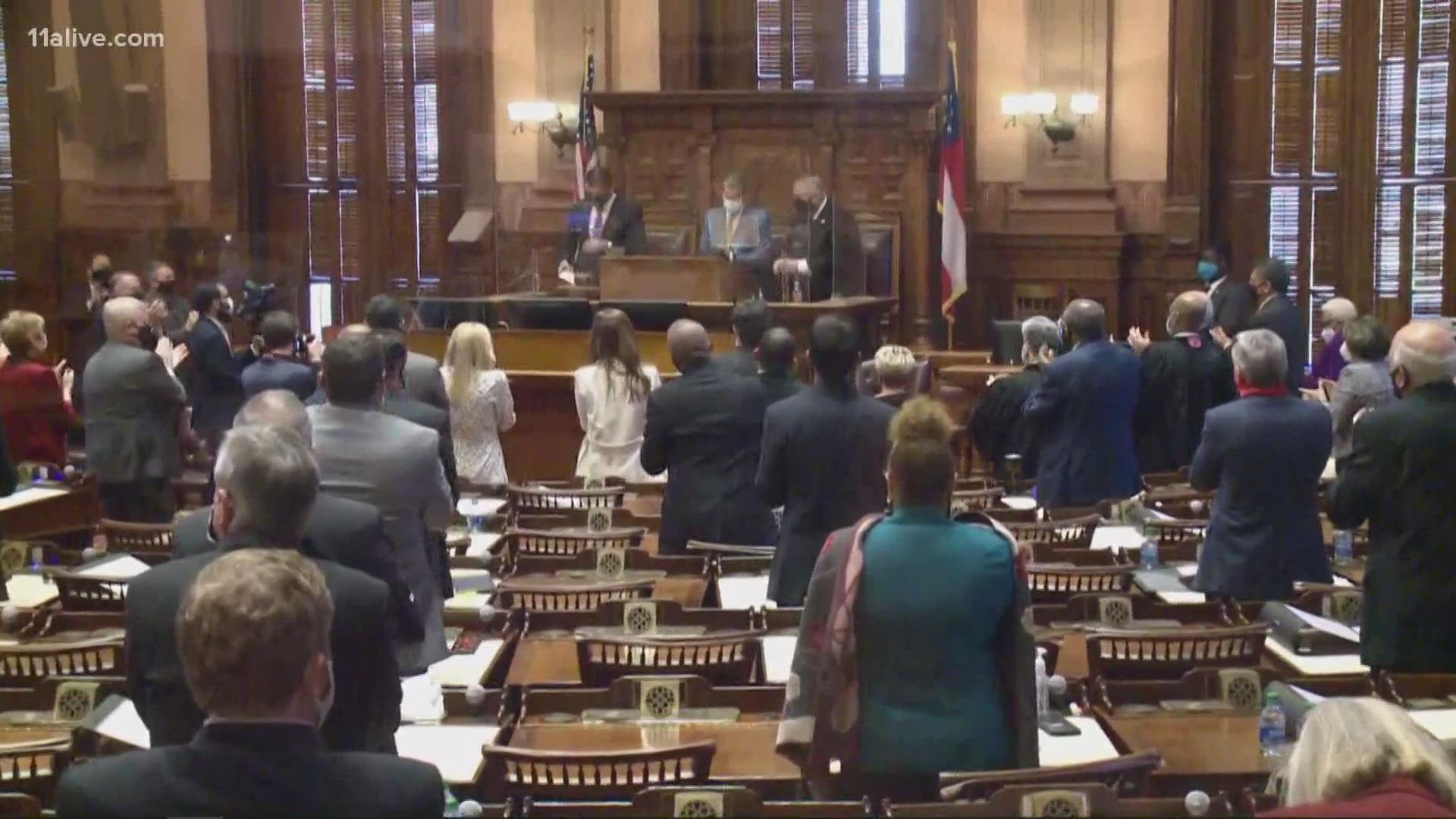