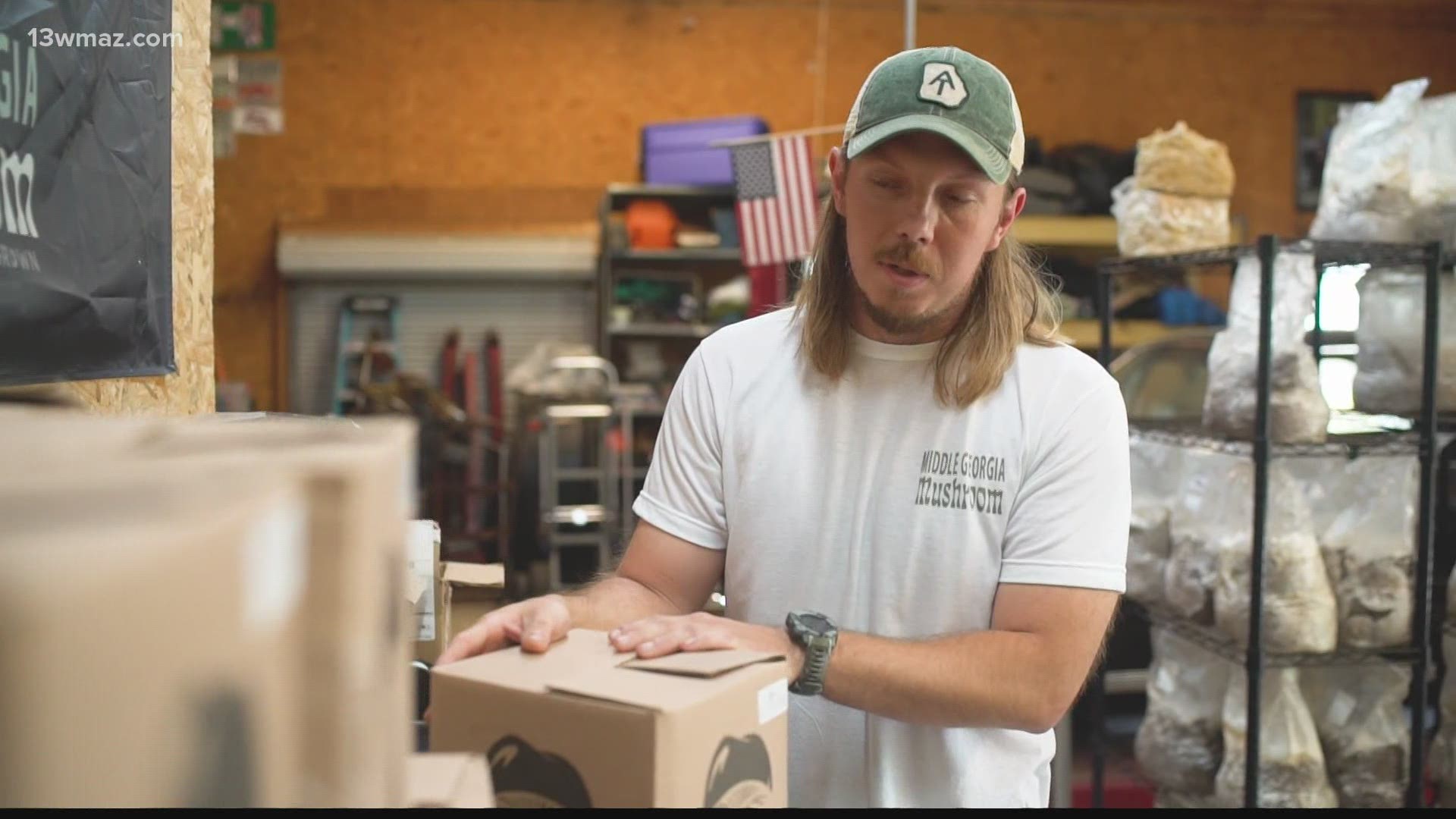 MACON, Ga. — Dozens of blocks filled with fungi sit lined up in an at-home auto shop in Macon.

The body shop, decorated with American flags and car repair products, is located right next to Hunter Pruett's family home and doubles as a mushroom farm.

"This is a shop we built to build muscle cars," said Pruett. "…Well, I had the idea to take half of it and turn it into a mushroom farm.”

Pruett’s grandfather served in Vietnam. He says seeing the opportunity to go do something bigger than himself and give back felt powerful to him, so he decided to join the military.

“It was an incredible experience. I was a part of some good teams,” he said. “I learned that the military was good for me, but it didn’t complete me, right? It didn’t give me what I was looking for in life."

He served in the Navy for four years.

“The military was great for the travel and the experience and the financial comfort, but it didn’t give me the connection that I wanted and it didn’t help me build the relationships that I needed to be happy,” he said.

Pruett says he’s always had an interest in the outdoors. He was stationed in Virginia Beach when he met a group of people who owned a small mushroom farm that produced about 15 pounds a month.

“During my time in the Navy, you know, we’re supposed to be clean cut and rugged dudes, right? But I’ve always had a heart for the hippies,” said Pruett.

The long-haired, tie-dyed wearing posse invited him to their farm. That’s when Pruett started getting involved; learning about different substrates and species of mushrooms. He says he was fascinated by their ability to build relationships with their community.

“I kind of took that as a calling to bring fungus to Middle Georgia,” said Pruett.

He got the whole family involved, too. His grandmother, sister, and father all started helping out.

“We’ll just bond and have fellowship on the farm,” he said.

That’s how he started Middle Georgia Mushroom. Now, Pruett delivers fresh mushrooms to local restaurants and sets up at farmer’s markets across Central Georgia -- connecting with people, while also educating his community about the health benefits of mushrooms.

He says he hopes to teach people that mushrooms have a positive impact on our environment and they’re more than what people see in a commercial grocery store.

He takes pride in being able to have his product go directly from farm-to-table. He's partnered up with restaurants to introduce his gourmet mushrooms to the world.

He partnered up with JAG’s Pizzeria in Mercer Village earlier this year to serve up the "Rockefeller Blue” specialty pizza. It was made with the Blue Oyster species from Middle Georgia Mushroom’s farm.

“There’s something that calls me more to being able to give people an experience,” Pruett said.

You can pick up Middle Georgia Mushroom’s locally by contacting them on Facebook. People can also order your own gourmet mushroom-growing kit from their website.

'We want it to be an experience': New seafood and meat market coming to Warner Robins