A team that only formed a few months ago, now heading to the top in the robotics world! 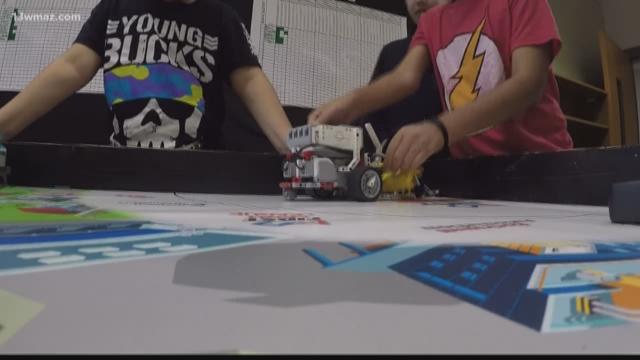 The Howard Middle School Robotics team -- the RoboHuskies -- are now headed to the state competition after a big win in the regional competition over the weekend in Warner Robins.

Now, they're going back to the drawing board -- or circuit board rather.

The team continues to brainstorm on how to complete their missions faster and more efficiently.

The team wouldn't exist in its current form without the initiative coach and sponsor Eric Fuller took last summer.

Fuller applied for the Peyton Anderson Grant, which they were awarded to have their vision come to life.

It's funding that now turned into fun for the middle school robotics team that walked into regionals as underdogs and walked out as champions.

"We were like, 'aww we're not gonna make nothing,' but then we were disappointed and sitting down," Banda continued, "but then they were like 'Robo Huskies' and we all just started jumping, we were just so happy."

Now statebound, Fuller says to call the team anxious would be an understatement.

"The guys said see you in the morning Dr. Fuller, and I said no no no not Monday morning, let me take it all in, let's meet Tuesday morning," said Fuller.

Robotics to these students is teaching more than just coding and teamwork, but sportsmanship.

"The RoboHuskies are just here to have fun, we're not here to win actually, " said Banda.

But they're going in confident. The team has agreed they will tackle whatever missions comes their way.

The state competition is in two weeks on February 3.

If they RoboHuskies can grab that win, they will be on the road to Houston, Texas, for nationals